A Year On, Beirut Mourns But Begins to Rebuild

“Beirut is a disaster right now,” says local architect Bernard Mallat, commenting on the aftermath of last year’s explosion that killed over 216 people, among them his colleague Jean-Marc Bonfils. The blast at the port’s warehouse destroyed tens of thousands of homes, businesses, and livelihoods. But the city, while mourning what it has lost, is rebuilding itself slowly, thanks to the energies of legions of volunteers.

Architect Lina Ghotmeh, whose Stone Garden apartment tower (10 years in the making, and completed a month before the blast), is still uninhabited – with its windows and interiors being restored. “What happened was surreal,” she told RECORD, noting that her building remained, fortunately, structurally sound and relatively intact. Like hers, countless other buildings are still in disrepair, while rubble and debris linger in the streets. On the other side of the city to the east, however, is a darker tale, with a 2014 residential apartment tower by Bernard Khoury standing like a hollowed-out shell, beyond repair. It is the most damaged building (the port is 1 kilometer away), and entire portions of the 25-story facade are missing, leaving its interiors like open-air rooms and stripped down to their bones. 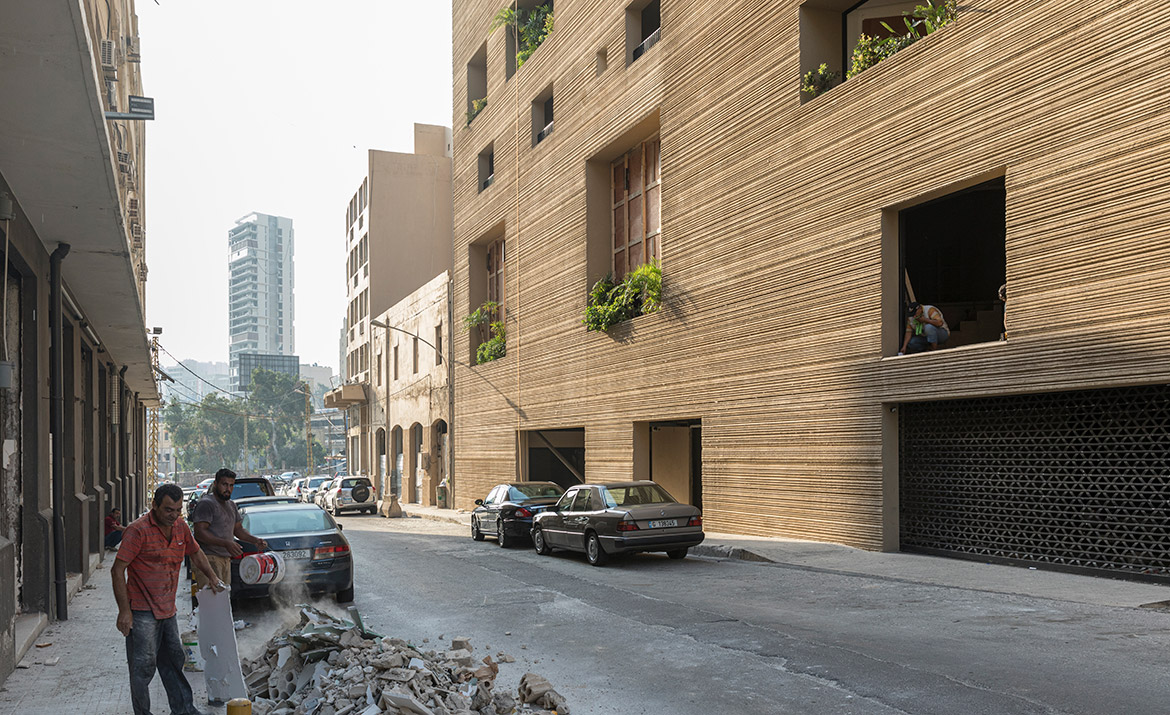 Besides the much-needed rebuilding, very little is going on in terms of new work and projects because of decades of corruption, inefficiencies in government, economic mismanagement, and hyperinflation (the Lebanese pound has lost 90% of its value since 2019). Lebanon has been struggling with a deep economic crisis and extreme poverty, while government spending surges, but with hardly anything to show for it on the civic level. Before the explosion, many architects including Ghotmeh, who splits her time between Beirut and Paris, had many projects planned for Lebanon, but all are now on hold. WorkAC, led by Columbia GSAPP’s dean, Amale Andraos (who was born in Beirut), had unveiled a new design for the Beirut Museum of Art, and Ghotmeh had a museum, hotel, and tower in the works.

The breakdown of infrastructure in Lebanon had been brewing long before the blast, in the wake of the country’s 15-year-long civil war that ended in 1990. But last August certainly marked the nadir, as mourning for the lives lost from the explosion was compounded by the seeming hopelessness of the economic meltdown, and the huge shortfall of funds needed to rebuild. Across the country, electricity is severely rationed (sometimes limited to less than three hours a day). “Hyperinflation and lack of basic services (electricity, water, fuel, medications, etc.) are pushing everyone to the brink,” says Mallat. “The explosion only multiplied the stressful situation we are in,” adds architect Fouad Samara, who has been based in Beirut since 1997. “We’re still living in this after-war period. The problem is rooted in the system that was built following the war and the leaders that took power,” Ghotmeh says.

People also cannot withdraw their savings from banks, or are limited to how much, making it almost impossible for someone to start a construction project. Clearly, developing here requires foreign capital and “a leap of faith (that things will get better),” says Charles Kettaneh & Nicolas Fayad of local firm East Architecture Studio. “Life in Lebanon is like a spiral that keeps going down and down,” adds Ghotmeh, reflecting on the decades of corruption that has plagued the country, which was once known as the Switzerland of the Middle East. “It is inhumane. It’s a Ponzi scheme on the scale of a country. The banks are bankrupt; the people have been bankrupted by the banks.”

Yet in the face of these challenges, Beirut is slowly rebuilding – not through governmental efforts but, instead, through the work of contractors and volunteers. Mallat, like many, has repaired his office and has helped former clients rehabilitate their apartments or shops, mostly pro bono. NGOs, such as Nusaned and the American University of Beirut’s Neighborhood Initiative Disaster Response, are also rebuilding homes that have been destroyed, many of which are old, historic houses that were in poor condition before the blast, and have given the families there a second life. “It’s amazing to see this grassroots movement of young citizens rebuilding houses with their hands and recreating profound social ties,” says Ghotmeh. “They are bringing back the spirit of Beirut.”

Support for rehabilitating Beirut has come from abroad as well, including Columbia’s GSAPP interdisciplinary alumni and student organization – Collective for Beirut – that was founded in the aftermath of the blast. With GSAPP professor Hiba Bou Akar as advisor and mentor, the collective hosts online lectures and discussions, and has created a forthcoming publication with essays, including by Andraos, other academics, and students with proposals of architectural projects and urban design, called “Re-Connecting Beirut”. The collective is also hosting a summer workshop with Beirut’s Université Saint Joseph (USJ), where its students from both faculties of Architecture “ECAR” (École d’Architecture) and Engineering “ESIB” (École Supérieure d’Ingénieurs de Beyrouth) will assess the damage of eight historic buildings in the city, and use 3D scanners to assist their reconstructions. In the spring, there was also a design studio by the American University of Beirut focused on the recovery of the area directly affected by the blast, and faculty and students are currently pursuing on-the-ground documentation and mapping.

“The people in Beirut and Lebanon have a lot of energy, and they’re always trying to find new ways to rebuild,” says Ghotmeh. Yet beneath that glimmer of optimism is a starker reality. “Walking through the neighborhoods around the port today, it appears, on the surface, to be somewhat normal. But while the debris has been swept away, the neighborhood and the city still live in a moment of paralysis,” adds Ziad Jamaleddine, of local studio L.E.FT Architects. Two lively areas across the street from the port, Mar Mikhael and Gemmayze, are back to almost how they were before the disaster, and most building owners have replaced their shattered windows and shored up their structures. But compared to life pre-blast, few stores are open, and the once-vibrant streets and balconies of apartment houses are strangely empty, showing that for Beirut, the trauma endures.

A year has passed since the explosion, but Beirut and its people are mourning and angry, as there has been no accountability for the explosion. “Grieving families have gotten no answers, no justice, and cannot truly start healing until they can reconcile their reality with the public narrative,” Mallat says.