This website requires certain cookies to work and uses other cookies to help you have the best experience. By visiting this website, certain cookies have already been set, which you may delete and block. By closing this message or continuing to use our site, you agree to the use of cookies. Visit our updated privacy and cookie policy to learn more.
Home » Academy Museum of Motion Pictures by Renzo Piano Building Workshop
ProjectsBuildings by TypeMuseums & Arts Center Projects

Like a set from a sci-fi movie, a monumental concrete-and-glass sphere—150 feet in diameter and appearing simultaneously weighty and buoyant—hovers beside the main wing of L.A.’s new Academy Museum of Motion Pictures (AMMP). It’s clearly no ordinary building addition. And on that fanciful note, architect Renzo Piano sets the scene for this homage to Hollywood’s movie industry—its on-screen and backstage artistry and technological feats—from vintage through cutting-edge. 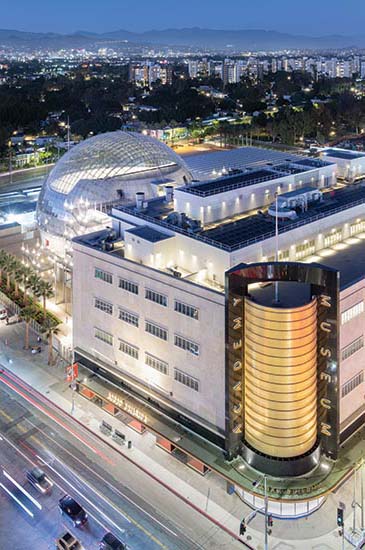 An enormous concrete-and-glass orb marries with the 1939 May Company department store to form the Academy’s first museum. Photo © Iwan Baan, click to enlarge.

The $482 million complex, which opened on September 30, is the Academy of Motion Picture Arts and Science’s first museum. For this venue, the organization procured an existing five-story landmark—the 1939 former May Company department store—along with the adjacent parcel, both on a 55-year lease from the Los Angeles County Museum of Art (LACMA), which had acquired the property in 1994. Now called the Saban Building, the May store, designed by Albert C. Martin, Sr., is a Los Angeles Historic-Cultural Monument—and a prime example of Streamline Moderne architecture—distinctive for its gold mosaic-clad cylindrical volume on a prominent corner of “Miracle Mile,” along Wilshire Boulevard, right next door to LACMA. Here AMMP engaged Renzo Piano Building Workshop (RPBW) to adapt the 1930s building, restoring many original features while creating the spherical addition for the state-of-the-art, 1,000-seat David Geffen Theater.

That globe connects to the historic building via three enclosed bridges. “The idea of the sphere,” says RPBW project architect Jonathan Jones, “was to create an otherworldly object that transports you, as movies do.” With most of its form hovering above a pedestrian plaza, the orb was envisioned, explains RPBW partner Luigi Priano, “almost like a spaceship—levitating above the ground, as if ready to take off as soon as the movie starts.” 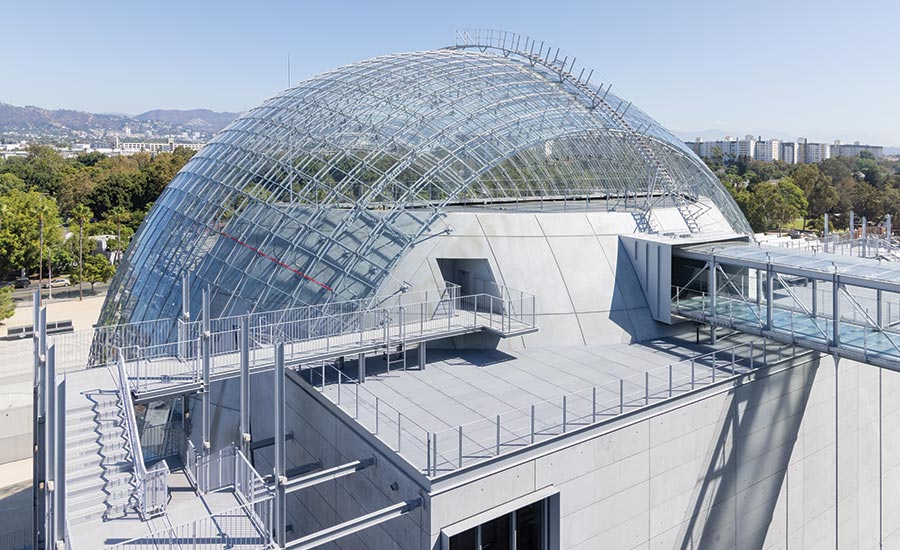 The sphere, containing a 1,000-seat theater, links to the landmark building via an upper bridge (1) and lower one, above the main entrance (2). The lobby (3) is just beyond. Photos © Iwan Baan 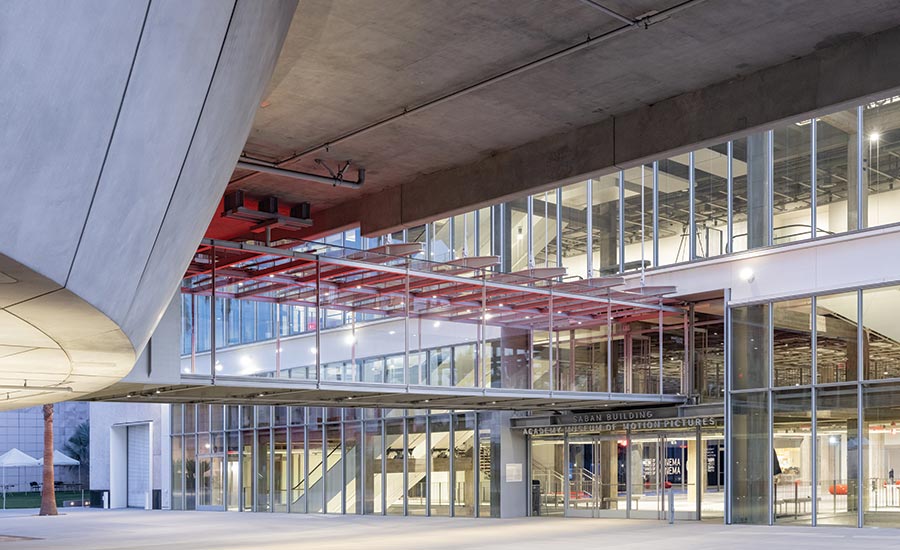 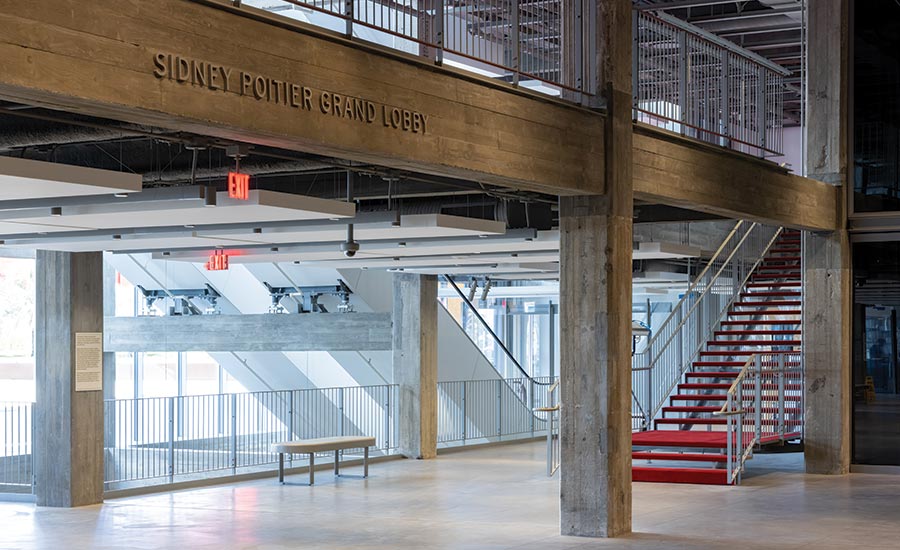 Cast in concrete and resting on four hefty plinths containing seismic base isolators, the orb visually dematerializes at its top, where a diaphanous steel-framed glass shell arches over a rooftop terrace. Even the theater’s external steel emergency stairs recall the scaffolding and stairway hookups of a rocket launchpad.

The separation between the 45,000-square-foot globe and 250,000-square-foot Saban Building distinguishes old from new, while opening up public outdoor space and pathways that connect to LACMA’s campus, extending its axes. (Two earlier buildings by Renzo Piano—LACMA’s Resnick Pavilion and Broad Contemporary Art Museum—are adjacent to AMMP’s site.) The spacing also makes the historic structure fully visible from the back, now a main entrance facade. There RPBW removed post-1939 additions, restored small balconies, and cleaned or replaced original stonework. The new entry plaza is a casual gathering space, with welcome shade where it passes beneath the massive sphere—but that vertically compressed zone also has a slightly daunting and oppressive quality, evoking Atlas bearing the entire weight of the world.

Still, the piazza flows seamlessly into the former department store’s vast main level, now AMMP’s Sidney Poitier Grand Lobby, which includes some gallery space and is open to the nonticketed public. Beneath a high ceiling with exposed mechanicals, its floors and stripped-down structural columns are concrete—though red carpet, with its obvious Oscars connotations, is a recurrent theme elsewhere in the building. Just off the lobby is Fanny’s, a Wolfgang Puck–Bill Chait restaurant named for performer Fanny Brice (Barbra Streisand’s role in the 1968 biopic Funny Girl). Ushering daylight into the interiors, RPBW opened the backs of the department store vitrines along Wilshire Boulevard and inserted five stories of glazed curtain wall into Saban’s north elevation, while maintaining its overall rhythms. For the signature gold “silo” anchoring the street corner, RPBW replaced 200,000 of its gold-leafed glass tesserae, sourced from the original Italian manufacturer.

Inside, along the rear elevation, the architects created a vertical circulation bay with glass elevators and long escalators. Compared with the dynamic facade-mounted escalator “tubes” at Paris’s Pompidou Center (which Piano created with Richard Rogers in 1977), these versions may seem banal, but they succeed in forming a legible and easy-to-find circulation spine. 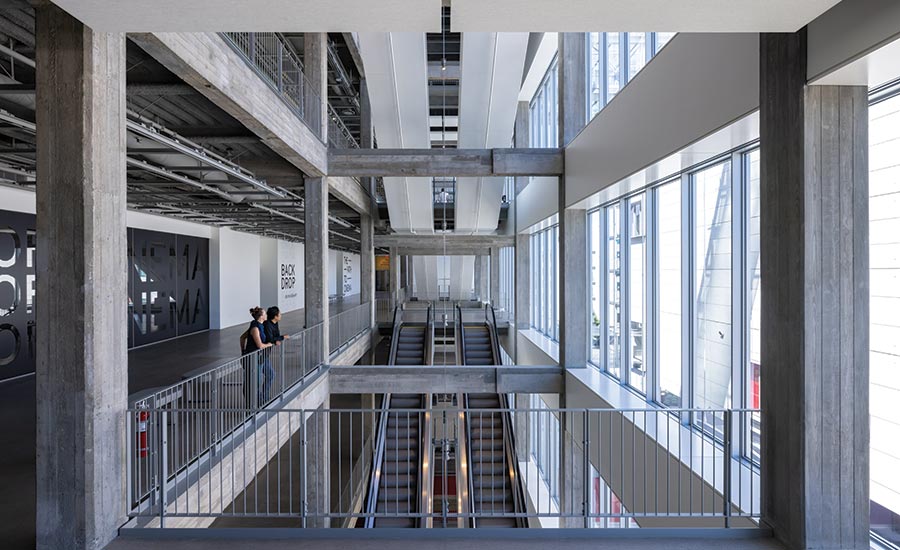 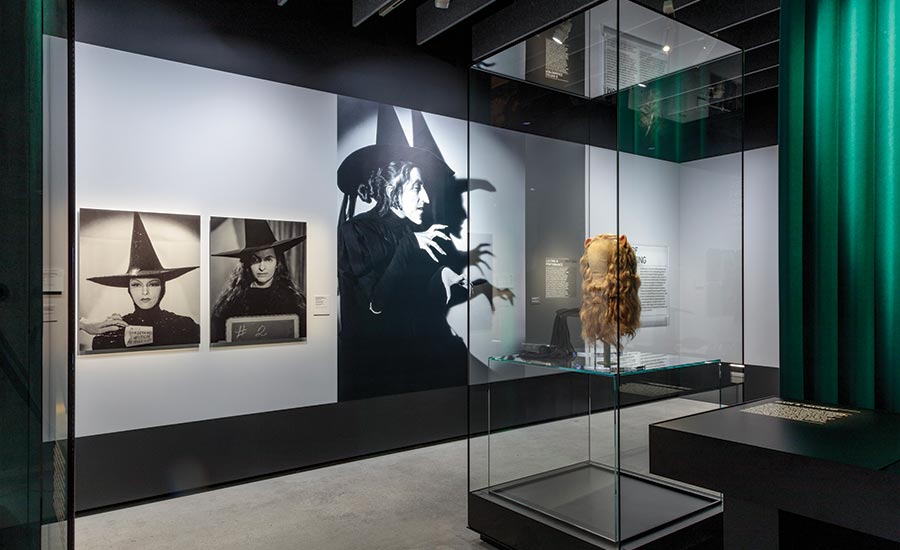 Primarily on three floors, the galleries run the gamut from costuming, sound, scripting, lighting, music, and sets to the mechanics and science of moviemaking—even extending into darker aspects of the industry’s history (such as its role in the McCarthy era or in racial exclusionism). WHY was the exhibition designer for the core collection, which includes the Wizard of Oz’s ruby slippers and lion’s mane, and draws from hundreds of thousands of film and video assets, with 50,000 movie posters among its holdings. An original manmade Jaws shark hangs over the circulation bay, and vintage Oscar statuettes ring a glowing Deco-styled circular space within the building’s gold cylinder. While the 288-seat Ted Mann Theater is below grade in the Saban Building, visitors reach the Geffen by bridge from the mezzanine level.

Vistors make a red-carpet entry via a bridge (6) that leads from the old building to the new one, with its David Geffen Theater (7). Photos © Iwan Baan 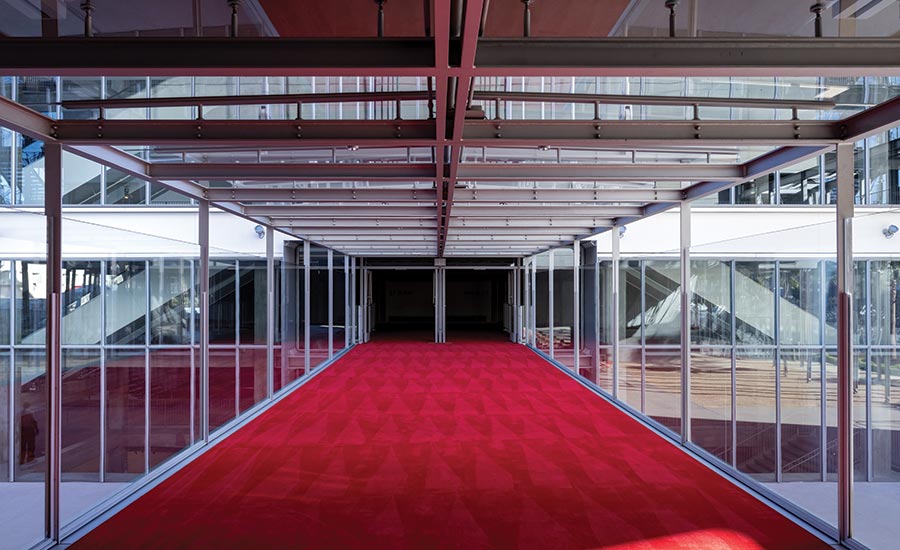 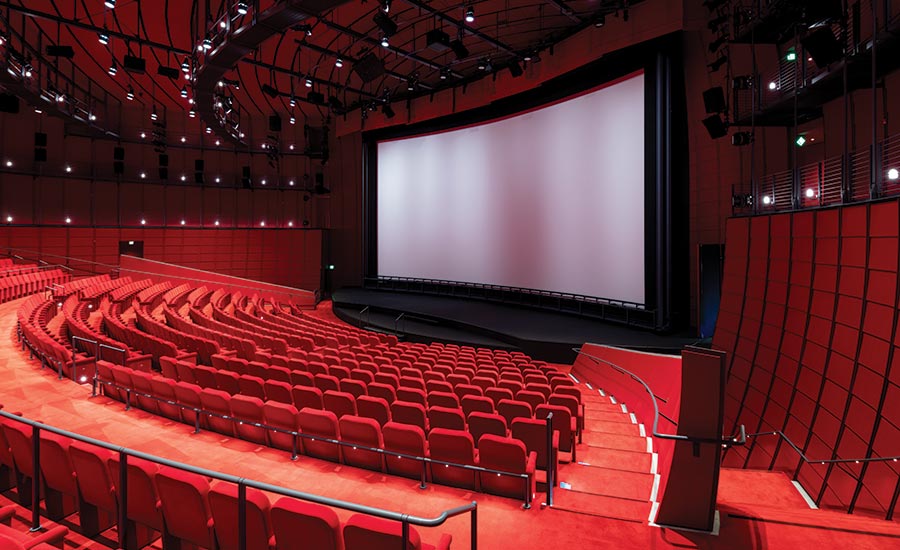 The ascent into the sphere rises from compression to dramatic expansion as its red-carpeted stairs wind between an inner and outer shell, following the orb’s curve, to reach the domed, darkened, 33,700-square-foot theater, illuminated by points of light like stars overhead. The raked seating, matching the carpet’s crimson, also has an arcing configuration, and even the 66-foot-wide screen subtly curves. The venue, which has a theatrical grid for live performance, can present films in many formats, from nitrate to laser projection, and its stage accommodates a 60-piece orchestra. (But this spectacular space will not be home to future Oscars ceremonies, which require a much greater seating capacity.) 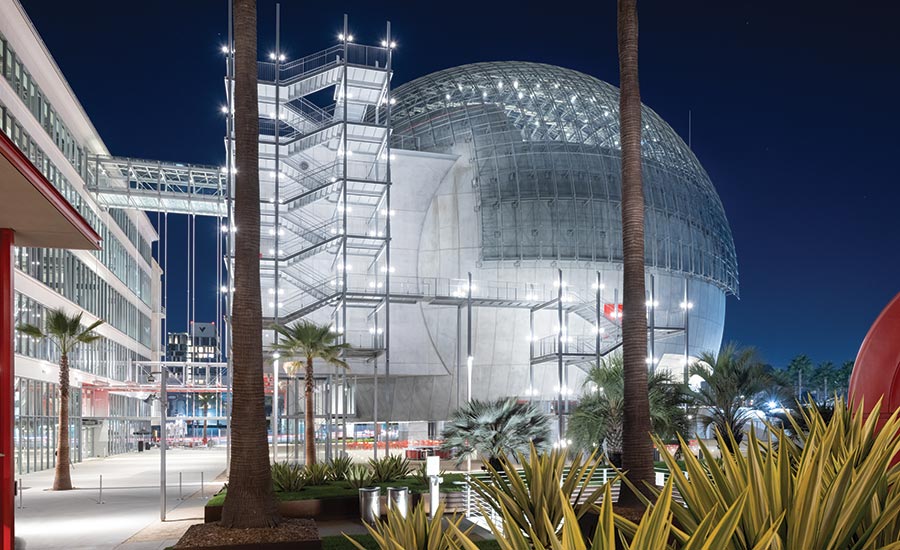 The roof deck above it is accessed from the Saban Building’s fifth floor, where the journey through the galleries and moviedom finally leads. Across from a large event space, a bridge extends to the sphere-topping, 8,600-square-foot Dolby Family Terrace. There the architectural choreography culminates with the overarching proscenium-like glass canopy framing a panoramic view—and, right on cue, the Hollywood sign appears in the distance.