If you found yourself in the Mojave Desert at midnight, it would probably be very dark. The all-enveloping blackness of that uninhabited landscape is what electric-car company Lucid would like its customers to think of, among other iconic California locales. “Mojave” is one of the manufacturer’s five destination-inspired palettes for interior colors, materials, and finishes. Striving for the luxury status of a Mercedes-Benz or BMW, the company’s brand identity channels both California’s natural beauty and its Silicon Valley smarts. To convey this duality, Lucid hired Gensler to design a model showroom and reception area at its headquarters in the San Francisco Bay Area.

In a highly collaborative process, the Gensler team worked with their clients—who, as industrial designers, were similarly sensitized to the quality of materials, space, and light—to create the desired “envelope to showcase the cars,” says firm design director Katie Buchanan. “The space needed to be quiet in response to the objects and feel like a natural extension of Lucid’s brand.” According to Derek Jenkins, senior vice president of design and brand at Lucid, they had to fight the temptation to go to either extreme: a more rustic environment or a super-futuristic, Blade Runner atmosphere. “But we wanted to make sure that the space would age well, and, in my experience, that usually requires a lot of restraint,” says Jenkins. Instead, they strove for a minimal palette of materials that had just enough warmth.

Located within a late-1990s-era Newark, California, office building—notable only for its sheer size and zoning for light-industrial use—the new Lucid Motors headquarters’ nearly 3,000-square-foot lobby and 12,400-square-foot showroom are part of a cavernous 315,000-square-foot complex largely devoted to designing and testing prototype automobiles. And the main color of these public-facing spaces is black. (Another electric-car maker you may have heard of is known for its red-and-white scheme.) 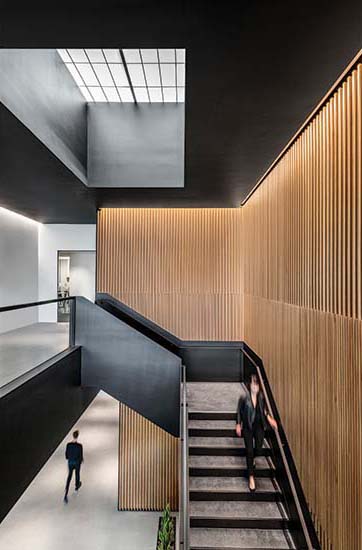 Upon entering, visitors are greeted by an impressive piece of auto taxidermy: the unpainted skeleton of a Lucid Air vehicle, mounted on a black-stained Douglas fir–clad wall. A study in contrasts, the voluminous space also features a black-marble reception desk, sitting in front of a white oak inset bearing the company’s logo (also black). While the design team had initially proposed shou sugi ban charred paneling for the dark wood surface, the client had maintenance concerns, as well as a desire to stick to more regional references. Likewise, Gensler suggested eucalyptus, with its variegated hues, as its lighter counterpart, but the Lucid team opted for the white oak (Quercus lobata), which is a native California species. To establish a crisp silhouette against the warm backdrop, the design team gave the original stair a railing of cold-rolled steel, and stained the concrete treads black. 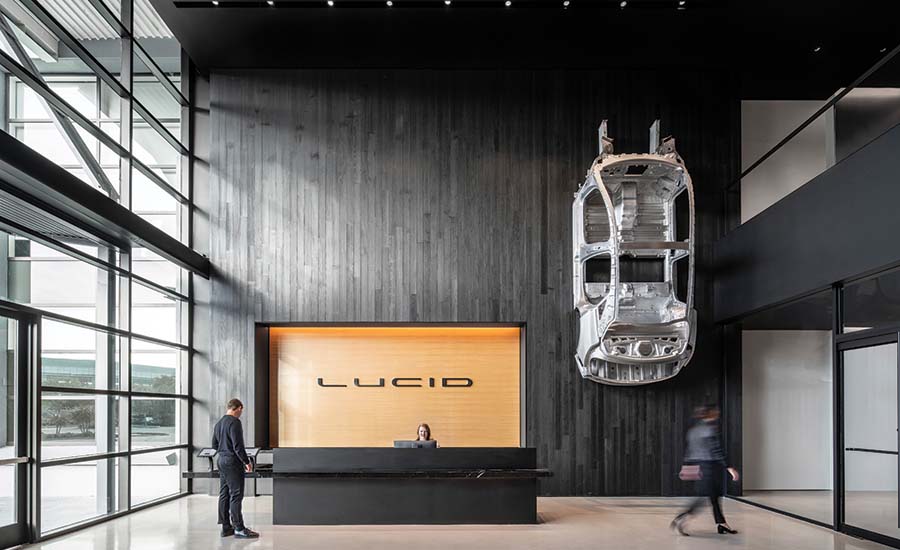 The showroom is revealed through pivot doors (top) from the bold lobby clad in slatted white oak and black-stained Douglas fir (above). Photo © Jason O’Rear

The adjoining showroom offers a striking welcome through two large glass pivot doors, each 8 feet wide and more than 10 feet tall. A prototype for other showcases across the country—nine (out of a planned 19 this year) have already opened—most of its space is devoted to spotlighting the cars. These sit on a “carpet” of black polished terrazzo set within a light gray concrete floor, gleaming under a backlit, seamless stretch-fabric ceiling, mounted in a custom drywall housing that discreetly incorporates sprinklers. Rather than use overtly rustic materials here, a video wall, composed of magnetic LED tiles, streams scenic natural landscapes as if you were driving through them. To highlight the technology inside the cars, glass cabinets on either side of the video wall currently hold sample batteries and a power train. 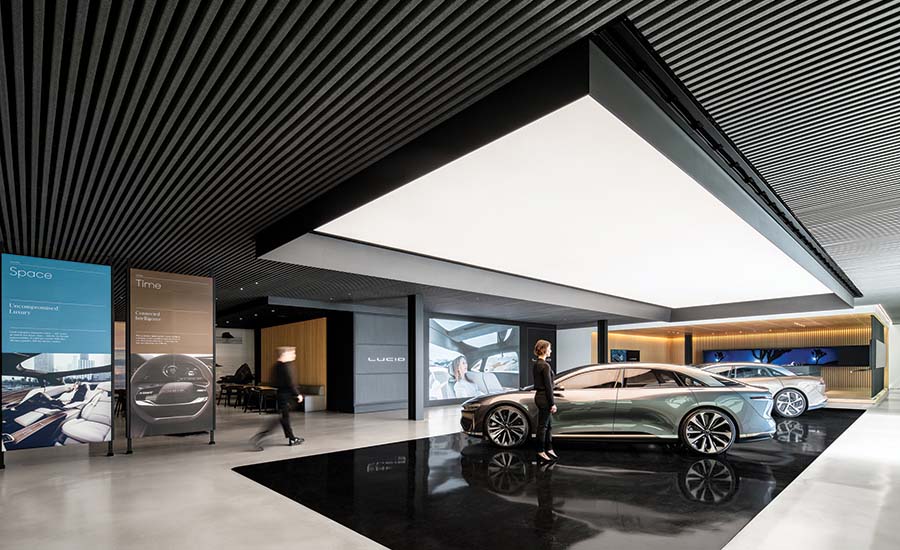 At the far end of the showroom, a raised lounge clad in white oak is set apart, like a stage for the next step in the luxury-car retail experience. Here, potential customers can take a “drive” via a virtual reality (VR) setup—particularly useful in showrooms where there is no test-drive option available. The VR setup also provides a way to fully explore the different interior and exterior options. It was the client’s idea to present physical materials and color options in bento box–style groupings, arrayed on a countertop instead of mounting them on a wall. A screen of steel tension rods serves the practical purpose of partitioning off a wheelchair ramp. It also adds a visual layer and allows video screens to seemingly float within the space. Befitting the high-touch retail approach, another corner of the showroom is devoted to a café, where customers can contemplate their potential purchase over coffee.

An options elevates the auto-purchase experience with stylish displays and a virtual test-drive simulator in a loungelike setting. Photo © Jason O’Rear

“This showroom is a template for our long-term retail spaces, and we’re investing a lot in them to make sure they have a nice luxury vibe but are also very approachable and accommodating,” says Jenkins. The same could be said for the car itself. This was apparent during a recent showroom visit, when I stepped into the $139,000 Lucid Air Grand Touring model on display, with its capacious Mojave-themed interior, comfortably plush Nappa leather seats, and a dashboard covered in synthetic suede. The bright simulated daylight of the illuminated ceiling, which can be dimmed and tuned to a range of white color temperatures, softened to a taupe glow through the car’s tinted glass roof. It was quite unlike camping out in the Mojave Desert, but wonderful in its own way. 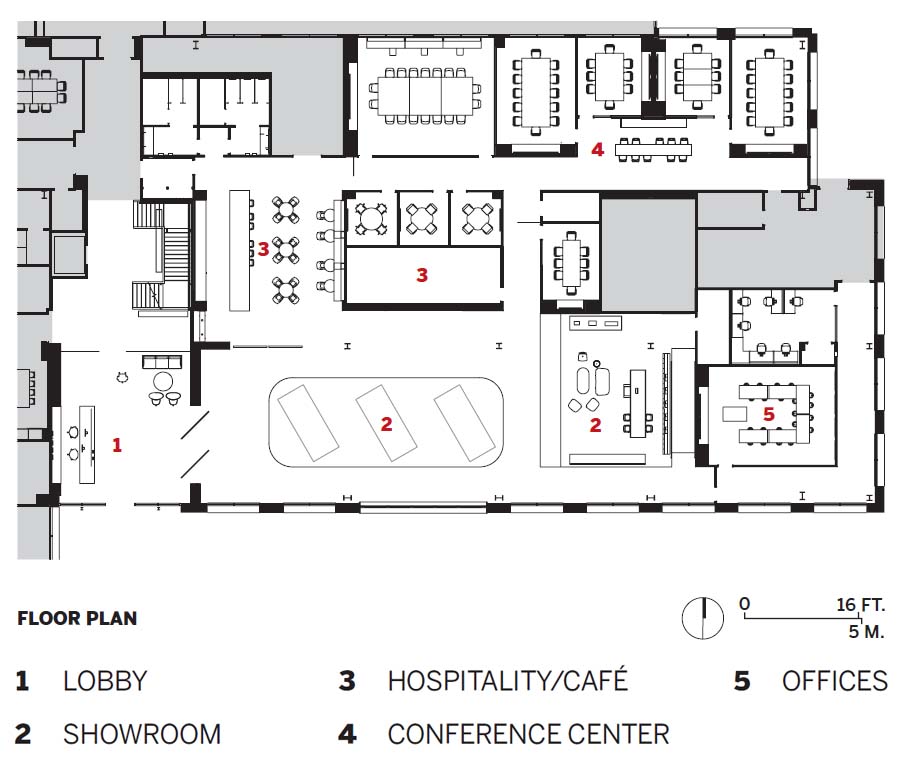