It was inevitable that when Mario Cucinella designed a church—his first in 35 years as an architect, 30 of those years at the helm of his own firm—it would showcase curves. As a young man, he says, he was fascinated by the Baroque churches of Francesco Borromini, among them San Carlo alle Quattro Fontane and Sant’Ivo alla Sapienza, both in Rome and both known for sinuous surfaces. So after winning a competition to create the new parish church of Santa Maria Goretti in Mormanno, Calabria, in the south of Italy, he says, “I turned to my oldest friends” for inspiration.

With a budget of just about $1.75 million for the church and an accompanying, single-story parish center (containing classrooms and priests’ quarters), the architect could hardly go Baroque. Instead, he chose an irregular four-leaf clover shape that makes the church an alluring presence on its hillside site, at once reminiscent of Borromini’s masterpieces and the town’s humble stone buildings.

The 52 foot-high concrete enclosure has only a few openings. On its north side, two walls part to create an entrance—while also contributing edges to a crucifix cut into the curves and lit by LEDs at night. On its south side, a small window is positioned to focus afternoon sunlight on a crucifix on July 6, the birthday of the parish’s namesake, who was martyred in 1902 at age 11. While you can see the geometry from the outside, on the inside, Cucinella says, “you feel it.”

The exterior walls are smooth and white, while interior surfaces were hand-finished in plaster mixed with hemp fibers and lime, producing a pleasingly mottled, earth-toned surface. Light entering from skylights is filtered through a 12-foot-deep scrim in a swirly shape reminiscent of Borromini’s folds but made of bioplastic fabric. Artist Giuseppe Maraniello created a lectern, tabernacle, and baptismal font in stone, bronze, and mosaic, while the simple metal and wood seating is by Cucinella. 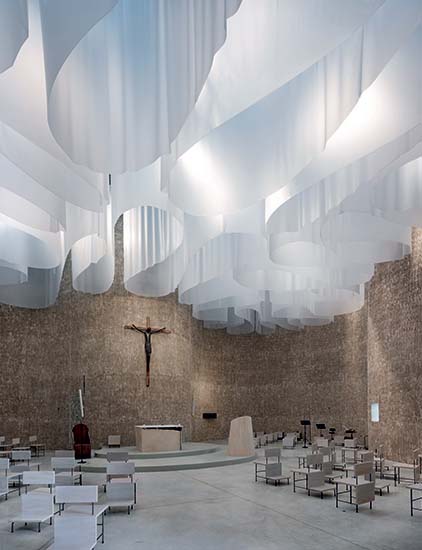 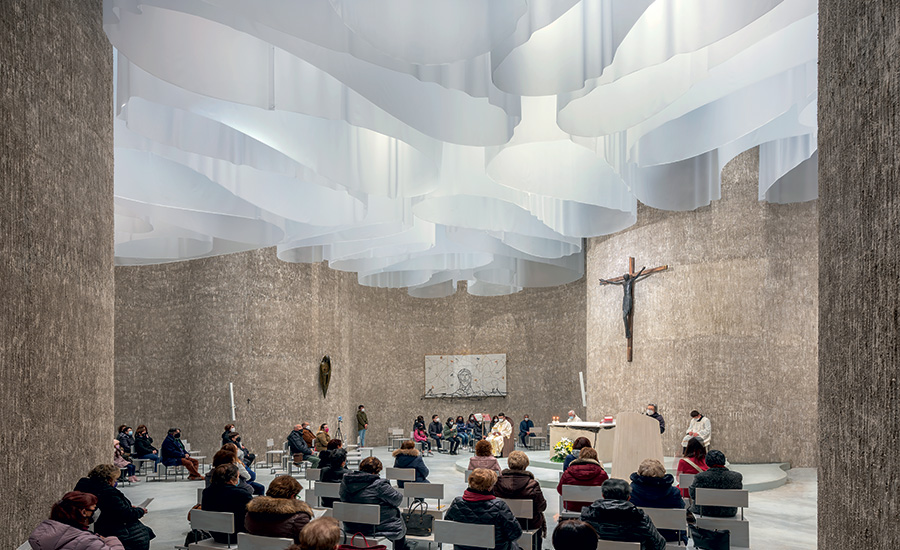 The smooth white concrete walls of the exterior (top) contrast with the mottled, earth-toned surfaces and diaphanous veil inside (1 & 2), whose 12 feet of fabric hang from the ceiling (3). Photos © Duccio Malagamba, click to enlarge. 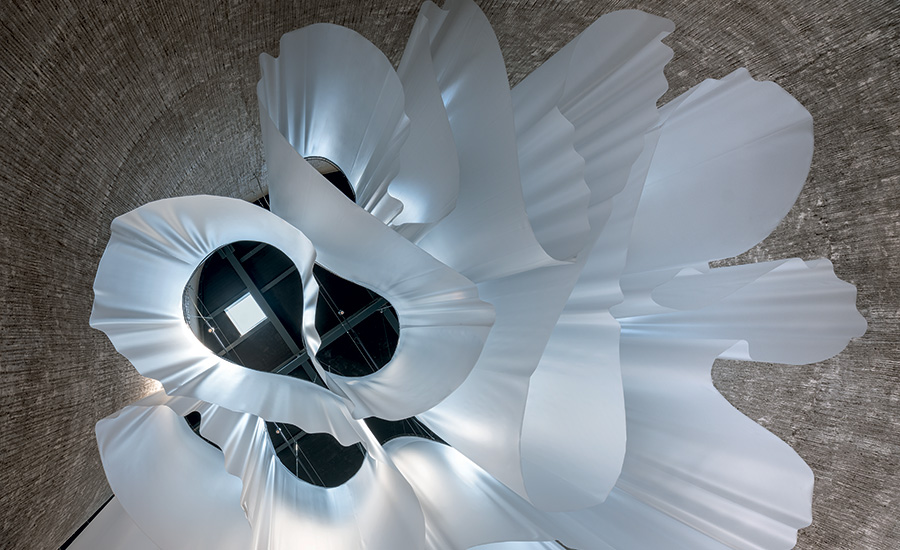 In addition to running a firm, Mario Cucinella Architects, with nearly 100 architects and engineers, Cucinella is founder and president of SOS (School of Sustainability), where students spend a year learning ways of making buildings green, before going on for professional degrees. There are courses in technology, but “we’re not going to solve the climate problem with technology. We need to look at how we used to build,” says the architect, whose work is the subject of the recent book Building Green Futures.

The church, where mass generally lasts 45 minutes, doesn’t require full climate control. Water heated by the sun in glass frames on the roof circulates through pipes in the floor during the coldest months. That way, the architect says, “You are not heating the whole 52 feet—just the five feet or so that people occupy. Some of the lights are powered by photovoltaic panels on the otherwise plant-covered roof of the lower building, but of course, he says, “they’re not enough.”

The project began in 2012, when an earthquake damaged the local parish church. (It was eventually restored, but not before the Vatican decided to invest in newer buildings.) In 2013, Cucinella won the design competition sponsored by the country’s assembly of Catholic bishops, which paid two-thirds of the building’s cost. (The same competition resulted in a church by Benedetta Tagliabue in Ferrara.) Because the other third had to be raised locally, the project took almost eight years from conception to completion. But, Cucinella says, that gave him time to win over its most important constituency: the elderly women who go to mass every day, and who at first “were suspicious of its modernism.” But that all changed once they got inside and saw the veil hanging down from the ceiling, the dominant feature of the interior, and the softly plastered walls, he says.

Did he make money on the project? Cucinella’s response was one most architects can appreciate. “No,” he said. “But at least we didn’t lose.” Although his firm has built hospitals, schools, and apartment towers, Cucinella thinks he has a “social responsibility” to take on small projects. “I know,” he says, “what a big impact they can have.” 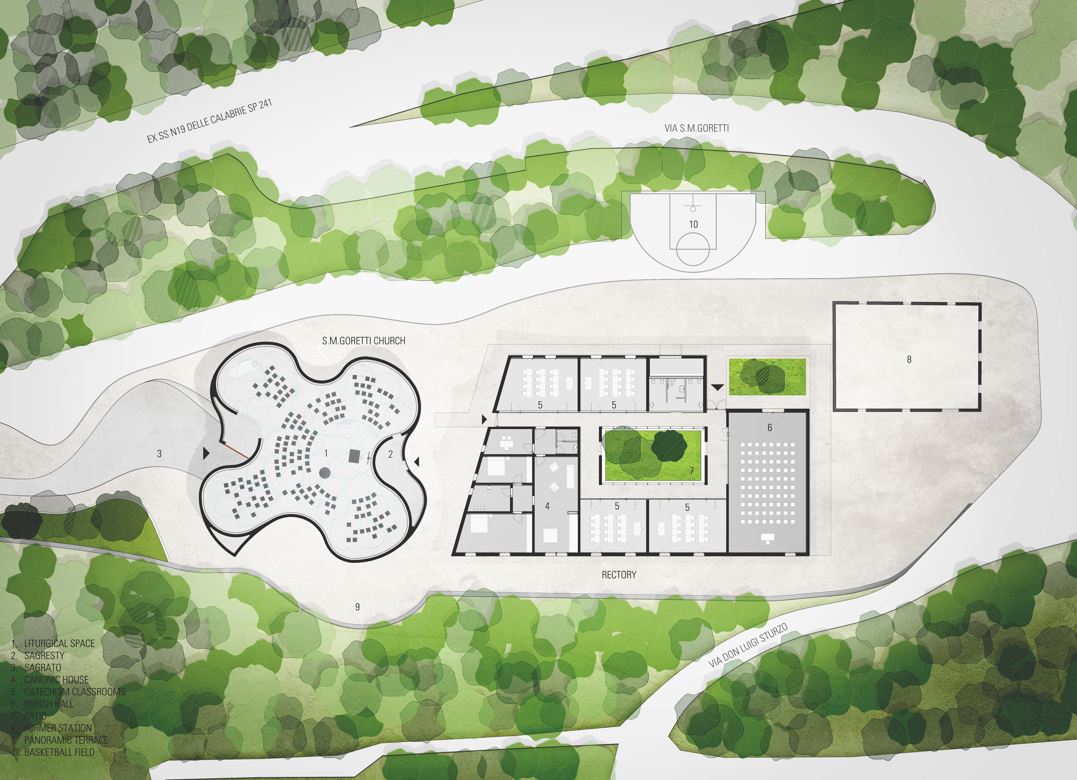 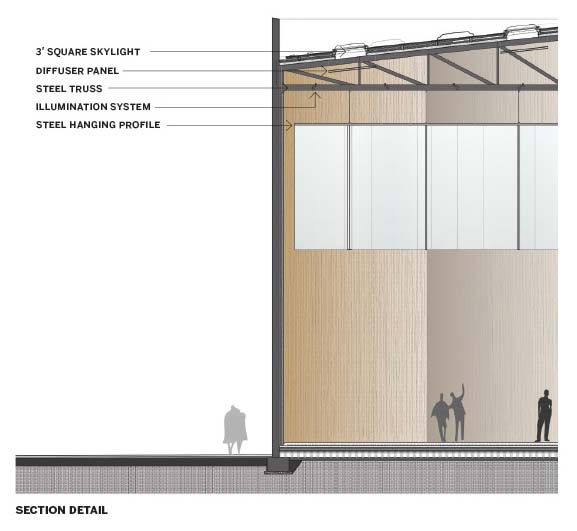 Design Miami 2017: Furniture by Architects, Design by Artists, and an Early Look at the ICA