This website requires certain cookies to work and uses other cookies to help you have the best experience. By visiting this website, certain cookies have already been set, which you may delete and block. By closing this message or continuing to use our site, you agree to the use of cookies. Visit our updated privacy and cookie policy to learn more.
Home » NXTHVN by Deborah Berke Partners
ProjectsBuildings by TypeCivic ArchitectureMuseums & Arts Center ProjectsReuse and Renovation

In neighborhoods around the country, architects, designers, and artists of color are rediscovering public places and building new ones that tell stories of and re-engage the local community. Architect Emmanuel Pratt’s Sweetwater Foundation and artist Theaster Gates’s Rebuild Foundation are just two examples, both seeding new creative and urban energy on emptied blocks on the south side of Chicago, having been inspired by artist Rick Lowe’s pioneering Project Row Houses in Houston.

Artist Titus Kaphar discovered the historically African-American Dixwell neighborhood while studying at Yale in New Haven, Connecticut, not far from a pair of one-story factory buildings that he has recently converted into NXTHVN, a 40,000-square-foot art and community incubator. After a difficult childhood with domestic tumult and a repeatedly incarcerated father, Kaphar discovered art in junior college, and ultimately received his Master of Fine Arts at Yale.

Struggling as a young artist in New York, he went home and walked the streets of Dixwell and wondered if he could afford to buy one of the neighborhood’s disused industrial structures. As he became successful, he thought such spaces could be repurposed to pair accomplished emerging artists—now called fellows—as mentors to local youth who had “visual intelligence,” as he puts it, but who don’t know what to do with it. “He wants to find kids with talent, give them a place to work, and put them on a pathway to a career,” says Jason Price, who cofounded NXTHVN with Kaphar and artist Jonathan Brand.

Kaphar met Deborah Berke at the 2016 opening of the 21c hotel in Lexington, Kentucky, which she designed. The 21c boutique hotels are known for displaying pieces from the art collection of the owners, Laura Lee Brown and Steve Wilson, which includes work by Kaphar. As he shared his vision with her, Berke realized that “this was the kind of work I have been wanting to do. I just had to take the project on.”

Price—whose background is in private equity, including supporting and scaling up Black-owned businesses—recognized that NXTHVN could not be financed conventionally. “Over a long history, it is rare that Black men get the chance to pursue an endeavor that is perceived as risky,” he explains. With Berke, the partners chose to make an assertive public architectural presence, echoing Kaphar’s own determination and personal magnetism. (His TED talk has been viewed by millions.) The very boldness of the project helped draw the necessary funding, which is a mixture of philanthropy, government grants, and revenues the facility generates.

Of four derelict buildings on a site in a largely residential neighborhood, the architect recommended retaining two: a former ice cream factory, which has been divided into studios for the fellows and the young artists they mentor, and a corner building that originally made laboratory glassware. In the latter, offices surrounding an open co-working space incubate local businesses. Moving in are a graphic design firm; the Black-owned grooming-products company Frederick Benjamin; and a home base for Freedom Reads, a non-profit that donates books to and installs libraries in prisons (started by the formerly incarcerated poet Reginald Dwayne Betts, who has collaborated with Kaphar on artworks that humanize prisoners and call attention to injustice). The street-facing side has been partitioned by a glass wall to accommodate a future coffee shop. 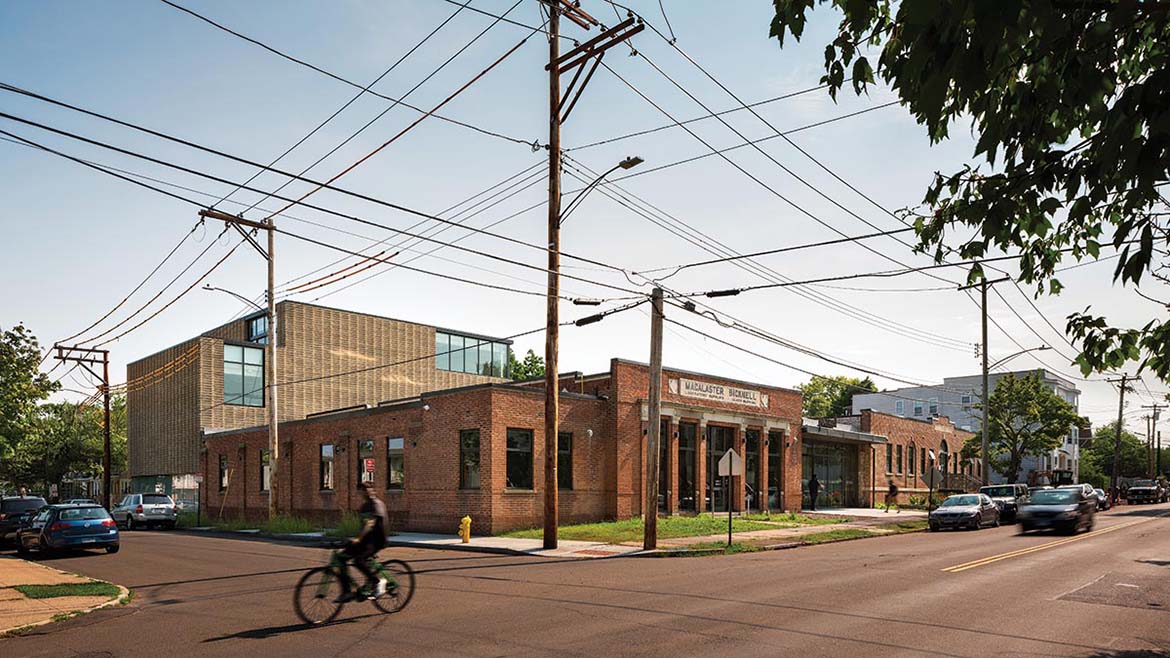 The renovated structures were “stripped to the most basic elements,” partner in charge Maitland Jones says. The brick exteriors were restored—including historic signage—and wood roof framing was retained. Tucked between the older buildings, a new pavilion framed in black-painted steel was built, with a full-height glass storefront facing the street. The clear demarcation of new and old was important, says Berke—her way of lending a quietly forceful presence to NXTHVN and inviting passersby to connect to the public activities, in the lobby and gallery beyond. Inside, the old surfaces retain swaths of stabilized, aged paint. A blond-wood reception desk turns 90 degrees to become a wood-clad ramp (rising to align the differing elevations of the restored buildings’ floors), with railings that visually separate it from both new drywall and old brick. The hybrid quality of these interiors allows the building “to operate in the background but not be neutral,” foregrounding the artists and their work, says Jones. 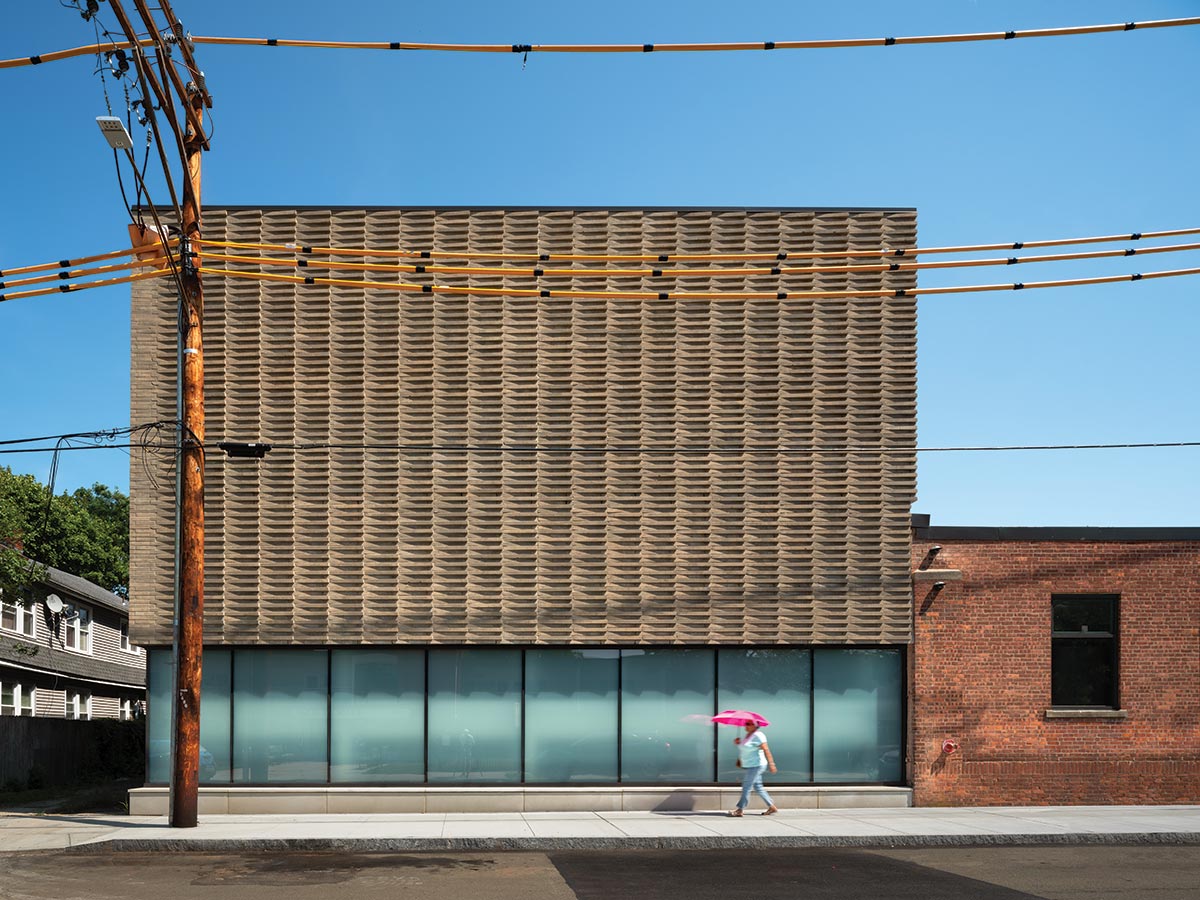 The architect built a three-story addition behind the older structures to accommodate live/work apartments for fellows. It is clad in beige brick, with molded, angled projections set in alternate rows to form a basketweave pattern. Jones calls the surface “optically arresting using the simplest means.” Contrasting with the redbrick of the former factories, the addition declares NXTHVN’s commitment to the long-overlooked neighborhood; it’s an emblem of new investment that’s mindful of the area’s history and residential scale. 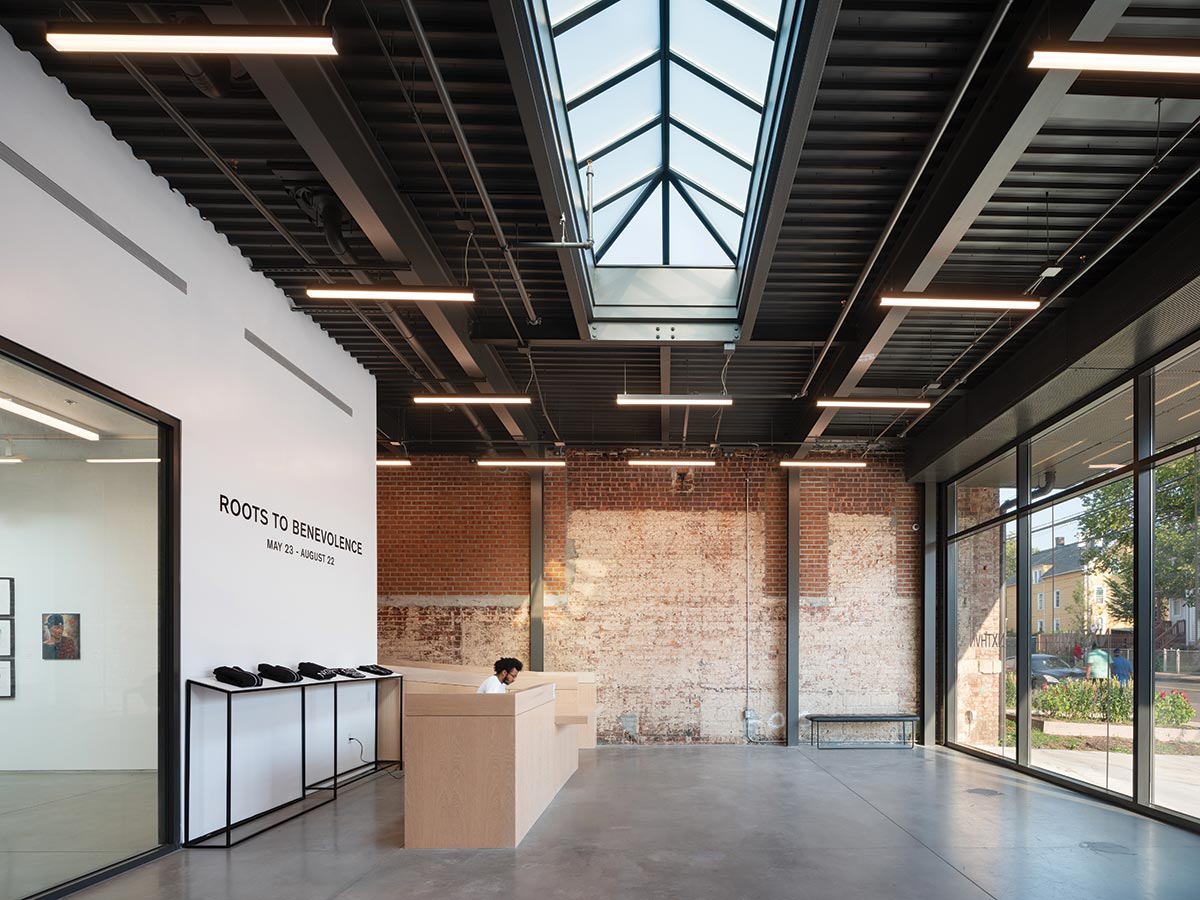 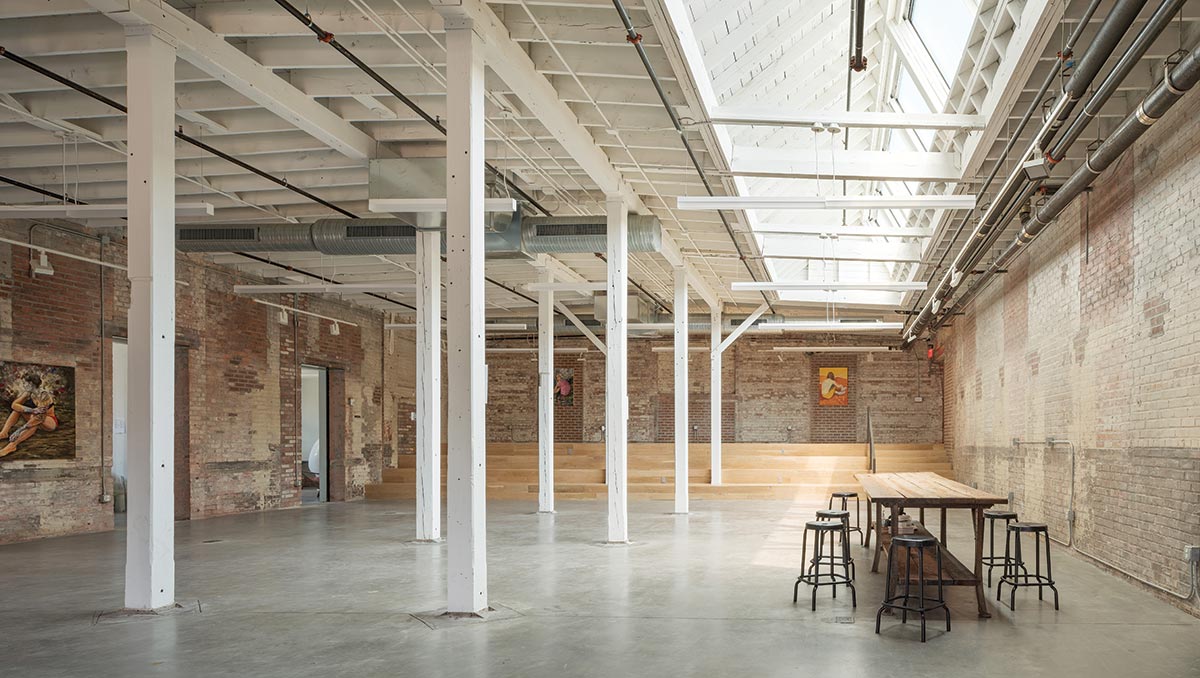 NXTHVN will invite local groups and nonprofits to use a lower-level suite of conference rooms plus a space for a future jazz studio and public performances, hearkening to the neighborhood’s past as home to New Haven’s music scene. 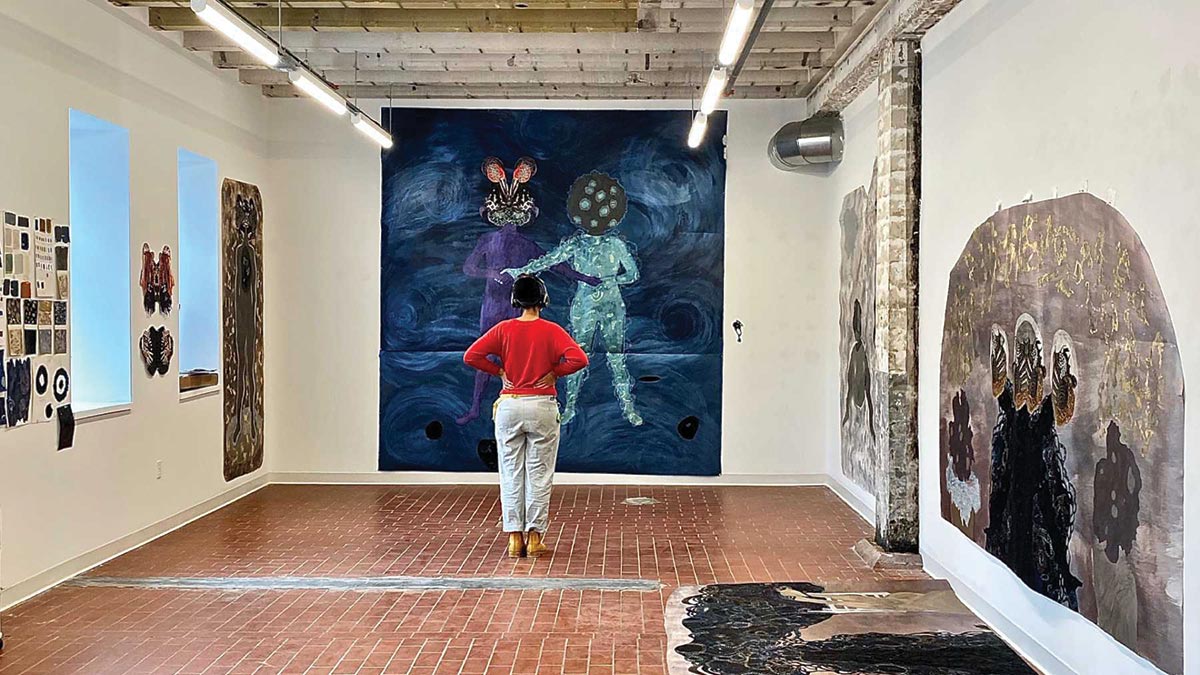 The studios opened in 2019, before the entire complex was finished. Yet applicants from around the world have clamored to become fellows, even as Covid surges have interrupted the rich mixing of artists, entrepreneurs, and neighbors that the building was designed for—“a challenging, but ultimately successful and gratifying period,” according to Kalia Brooks, director of programs and exhibitions at NXTHVN. Last July, seven artists and two curators, chosen from 300 applicants, began the latest fellowship round. The mentoring program currently works with nine students from New Haven. “We have already hosted a Covid vaccine clinic and a food pantry here,” says Price, adding, “NXTHVN is a vessel for the community to come together in pretty surprising ways.” 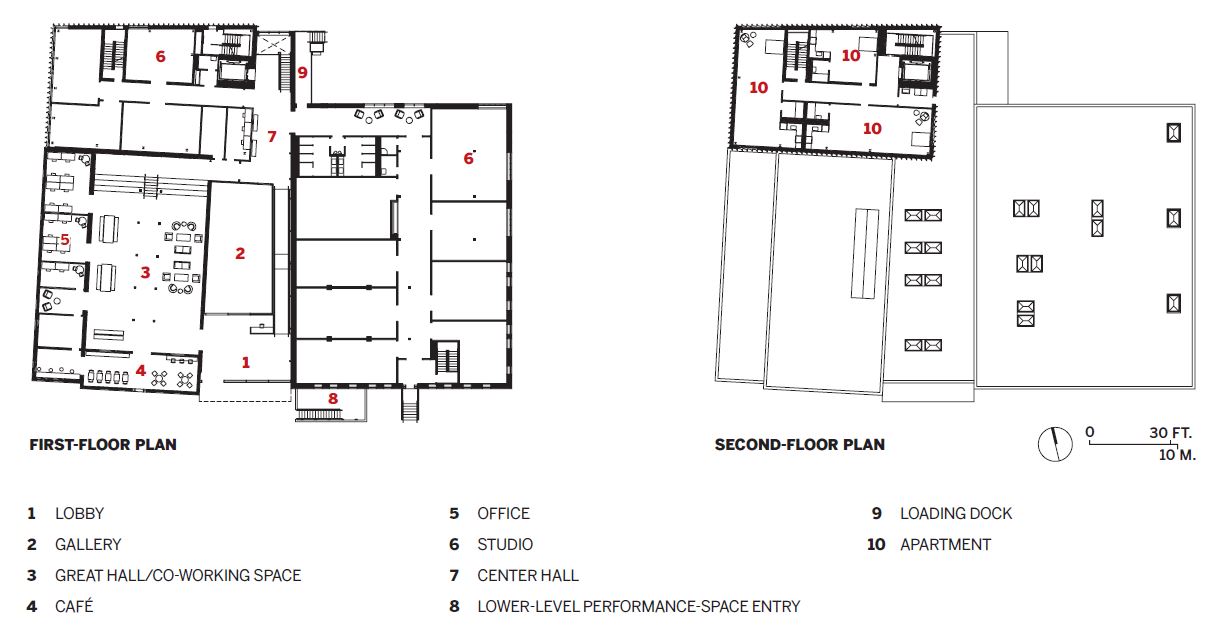