While sports fans regularly take to the streets of Cincinnati to celebrate local victories, the Queen City’s soccer enthusiasts show their love, win or lose. Prior to every FC Cincinnati game, supporters of the club hold a boisterous “march to the match” that amasses fans as it wends its way past breweries and parks to the pitch. In its design of the team’s TQL Stadium, which opened last May, Populous transformed the facade into a permeable screen capable of motion graphics that match the energy of this already epic tradition.

After the team’s launch in 2016, FC Cincinnati played matches at UC’s Nippert Stadium. For the club’s first dedicated facility, located on a 12.4-acre downtown site, the Populous team wanted to devise a building that would support the fans’ enthusiastic forms of expression. Architect Ayesha Husain, a principal at the firm, says the 512,000-square-foot open-air TQL Stadium features an elevated east plaza in part to accommodate the home stretch of the pre-game march. Moreover, inside the 26,000-seat venue, a portion of the seating bowl is raked at a 34-degree angle, to focus drumming, chants, and roars into a “wall of sound” that grips the pitch.

In addition to organizing the crowds, this venue is designed to pump them up. “It’s not often you get to build a new stadium in an urban environment, and we were looking for something to attract and draw people to the site,” Husain notes. Populous arrived at a facade comprising more than 500 aluminum fins that are folded along asymmetrical splines. Viewed from the street at an oblique angle, the extrusions appear singular, like a creased torus. Head-on, observers see between the elements to the building’s superstructure and the playing field beyond. 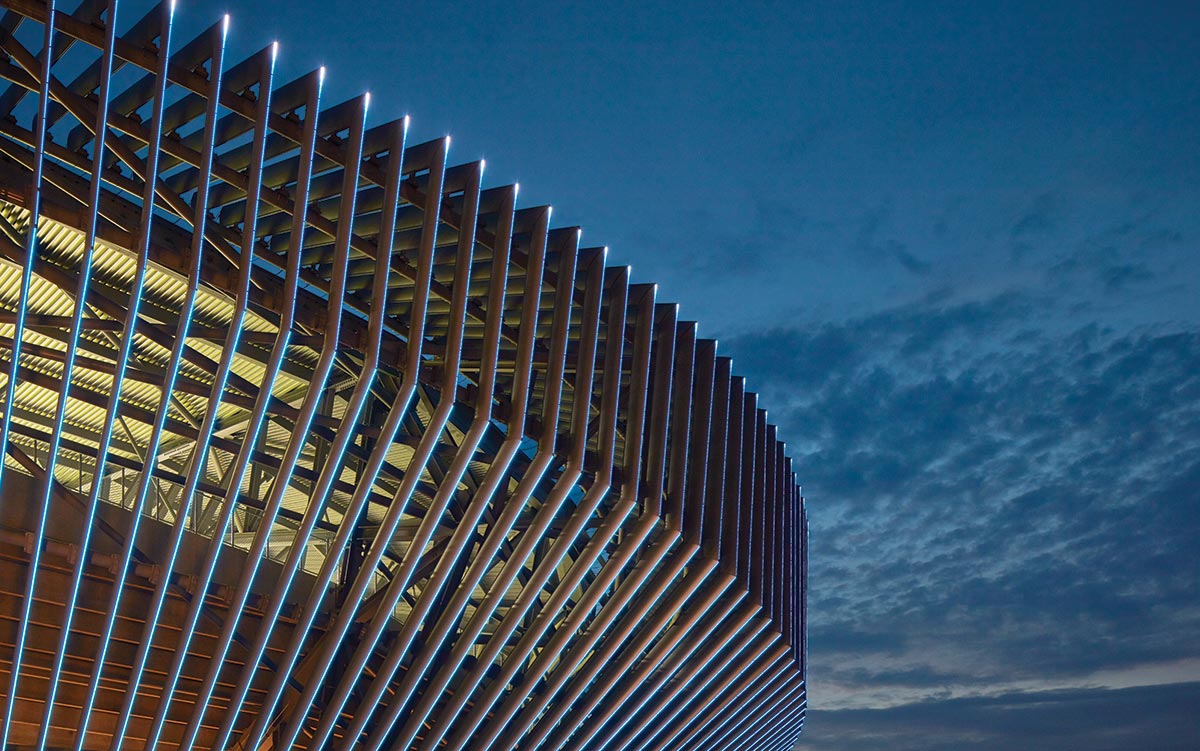 After developing this scheme, Populous invited SACO Technologies, a Montreal-based manufacturer of LEDs for video applications, to “merge the facade system with dynamic lighting and bring the stadium to life,” as Husain puts it. To turn the architectural surface into a programmable media display, the SACO team embedded LED luminaires in approximately half the fins, connecting the fixtures to a video control system. SACO vice president Yanick Fournier, who describes the light fixture as “a video screen in a stick,” explains: “Our media collective created approximately 10 scenes for specific moments, and we also provided a dashboard and guidelines so that the club could create its own content.” The illuminated scenes, which range from geometric patterns to soccer-themed animations, face east to minimize visual disruption of the adjacent residential West End neighborhood.

Because Populous tapped SACO early on, the two studios designed the fins collaboratively. According to Jonathan Labbee, co-CEO of the lighting company, they arrived at a mass-customizable profile that “captures our fixture and acts as a raceway for cabling” by tapering from back to front. Wisconsin firm Jones Sign fabricated the aluminum fins, incorporating the LED sticks simultaneously. Of integrating architecture and LED video technology, Labbee says, “That keeps the viewer inside of the experience.” Not that the FC Cincinnati fans need prodding. For the club’s first game inside TQL Stadium, the stands were filled to pandemic-permitted capacity, while television viewership for Major League Soccer was nearly double the average, and Cincinnatians have been devotedly marching to the match ever since.

Read more about lighting projects from the March 2022 Issue

Structural System:
Manufacturer of any structural components unique to this project: SteelFab and Jones Sign

Wimbledon Centre Court by Populous and ME Engineers