A drive through Connecticut along I-95 takes you past a parade of signage-bedecked strip malls, stucco-clad motels, and brightly lit gas stations—the American commercial vernacular, experienced, as intended, at 70 miles an hour. But among these decorated sheds is a duck, to borrow Denise Scott Brown and Robert Venturi’s term for a building formally distorted for symbolic effect. Marcel Breuer and Robert F. Gatje’s 1970 Armstrong Rubber Building stands just a few hundred feet from the highway in New Haven, its heavy concrete mass floating incongruously above an Ikea parking lot. Thick stilts leave a yawning vertical gap between a two-story base and a five-story block hanging above: building as sign, or, perhaps, sign as building. Either way you can’t miss it. 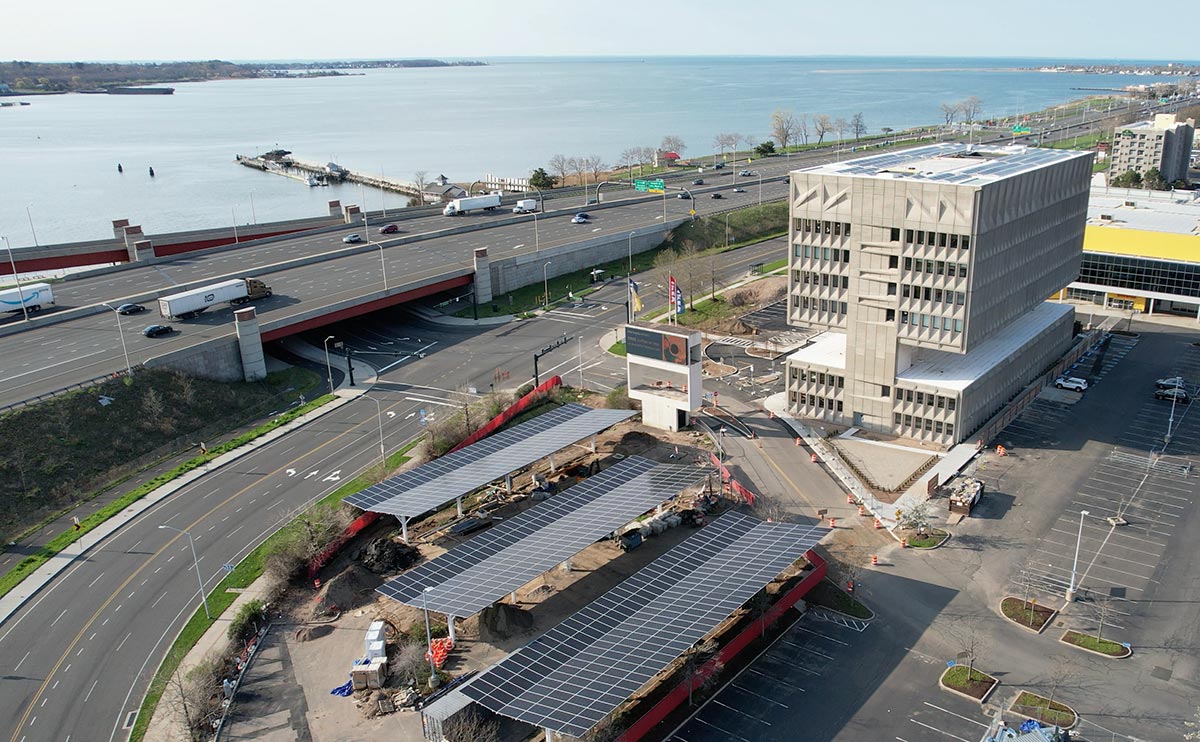 The building had sat vacant since the 1990s, after Pirelli purchased Armstrong Rubber and later downsized its offices. (In the early 2000s, following Ikea’s purchase of the property, a low-lying rear portion was demolished to make room for a parking lot.) But this May, it reopened as the Hotel Marcel, a 165-room hotel that is operated under Hilton’s Tapestry flag and named in honor of Breuer. In keeping with preservation standards, the building’s distinctive exterior has barely changed—although new windows and a power washing have done wonders to brighten up its facade. Westport, Connecticut–based architect and developer Bruce Redman Becker, who bought the building in 2019 and oversaw its renovation, has instead focused on reworking the interiors and investing in cutting-edge sustainability upgrades that he projects will enable the building to achieve net zero energy. Solar arrays, a battery system, all-electric mechanicals (including water heaters and laundry equipment), and a high-performance envelope put the building on track to be the country’s first Passive House–certified hotel. 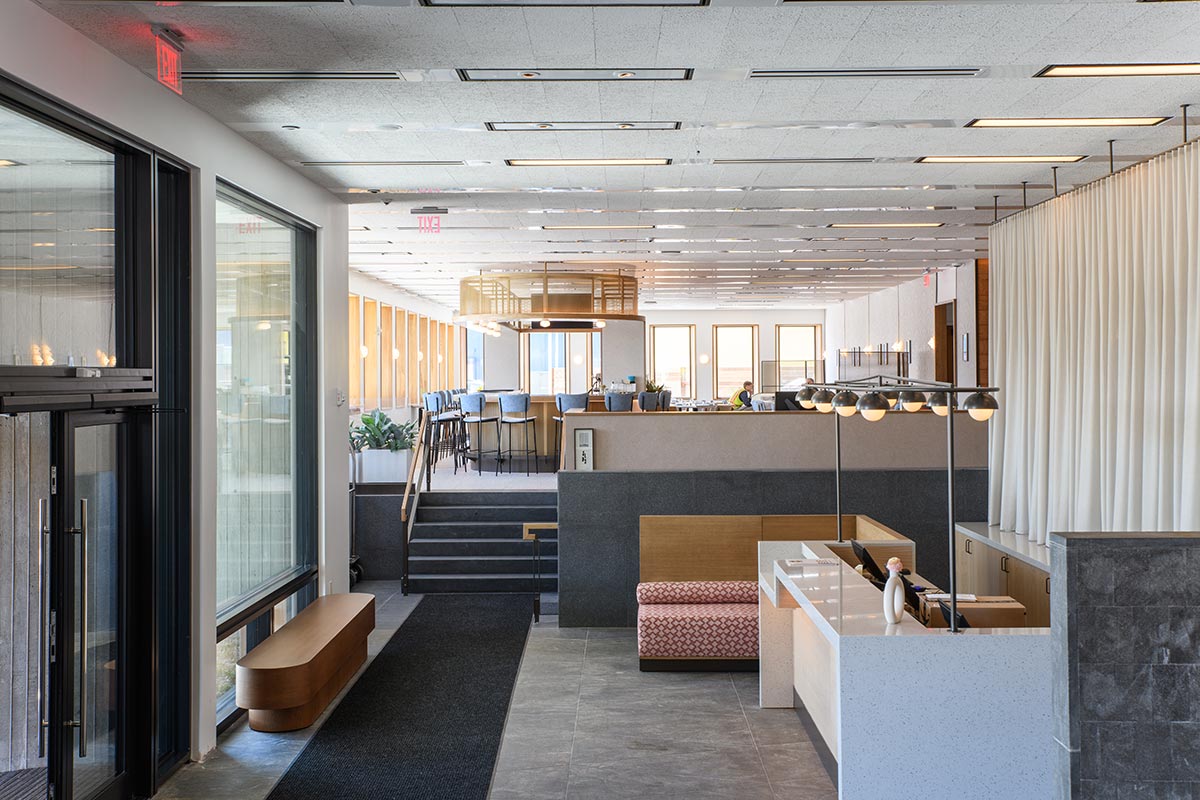 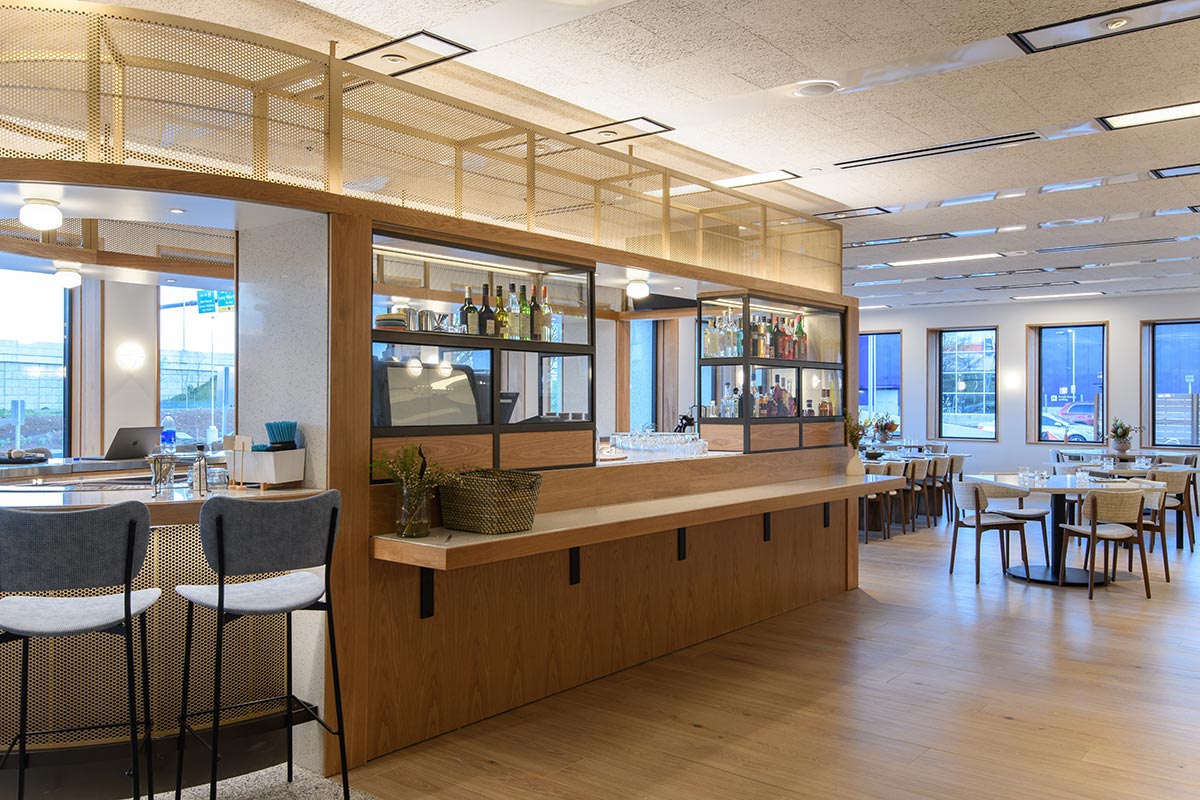 Becker, whose past work ranges from one of the world’s first large apartment buildings with a hydrogen fuel cell (New Haven’s 360 State Street) to the restoration and mixed-use conversion of the former Pauper Lunatic Asylum on New York’s Roosevelt Island, finds himself drawn to challenges that require both design and development creativity. “There’s no client who would hire me for these projects,” Becker says, “and I don’t think they could be done without our integrated approach.” So, when he pitched Ikea, the Armstrong Building’s then owner, he did so with an unusual proposal: that he would create a hotel capable of generating as much energy from its solar arrays as it consumes, while fastidiously respecting Breuer’s design. Ikea, which had rejected numerous previous offers for the property, loved the idea and sold the building to Becker for $1.2 million. 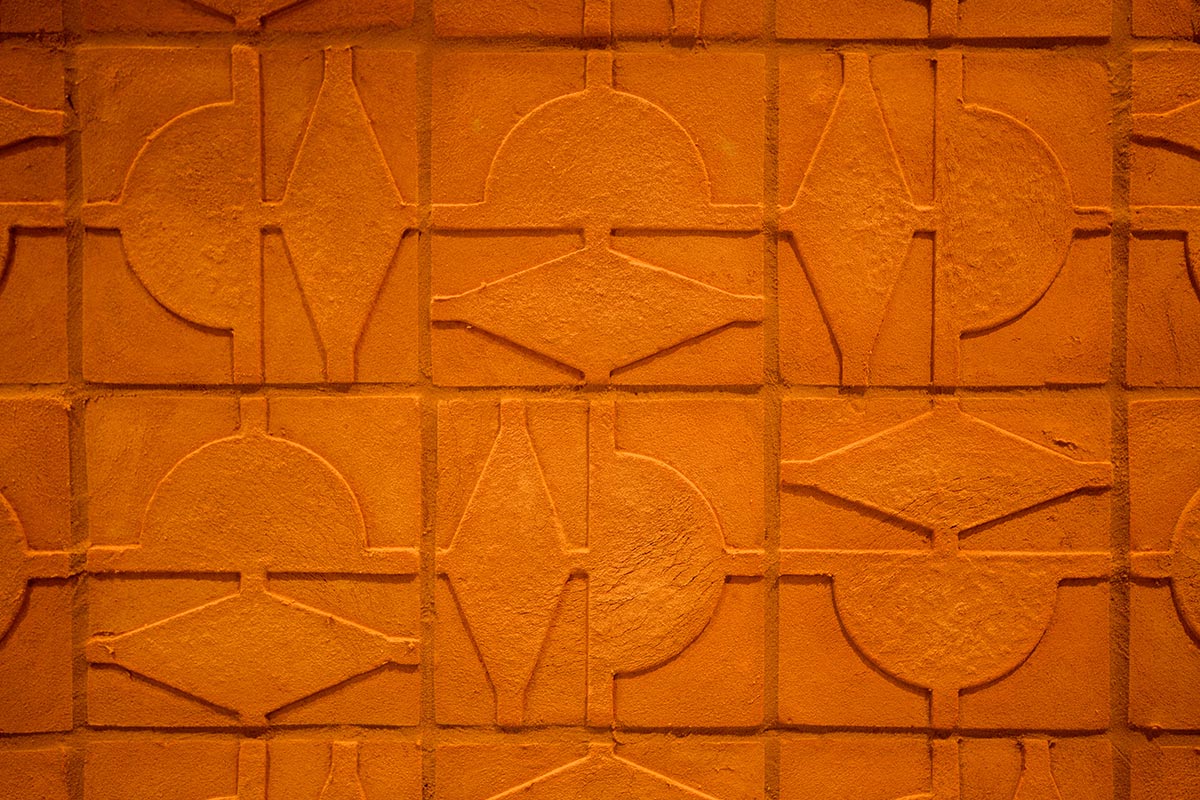 A wall of clay tiles by Dutch East Design is a highlight of the hotel’s ground-floor public spaces. Photo © Zach Pontz

Perhaps the first thing visitors to the Hotel Marcel will notice is the geometric interplay of shadow and light across its facade, where board-formed concrete contrasts against precast panels inset with punched windows: Breuer knew how to do texture. Solar panels shading the parking lot and a simple black entrance canopy, along with updated signage, are among the only outward indications of the reuse. But, after passing through a compressed vestibule lined with board-formed concrete, visitors encounter a bright, contemporary interior designed by New York–based Dutch East Design. Here Breuer-inspired midcentury nostalgia, visible in rich fabric patterns and a rebuilt drop ceiling with original light fixtures, meets the Anthropologie aesthetic of globe lights, blond wood, and white terrazzo. Behind the front desk, a wall of reddish terra cotta tile, lit indirectly from above, seems to embody a little of both. 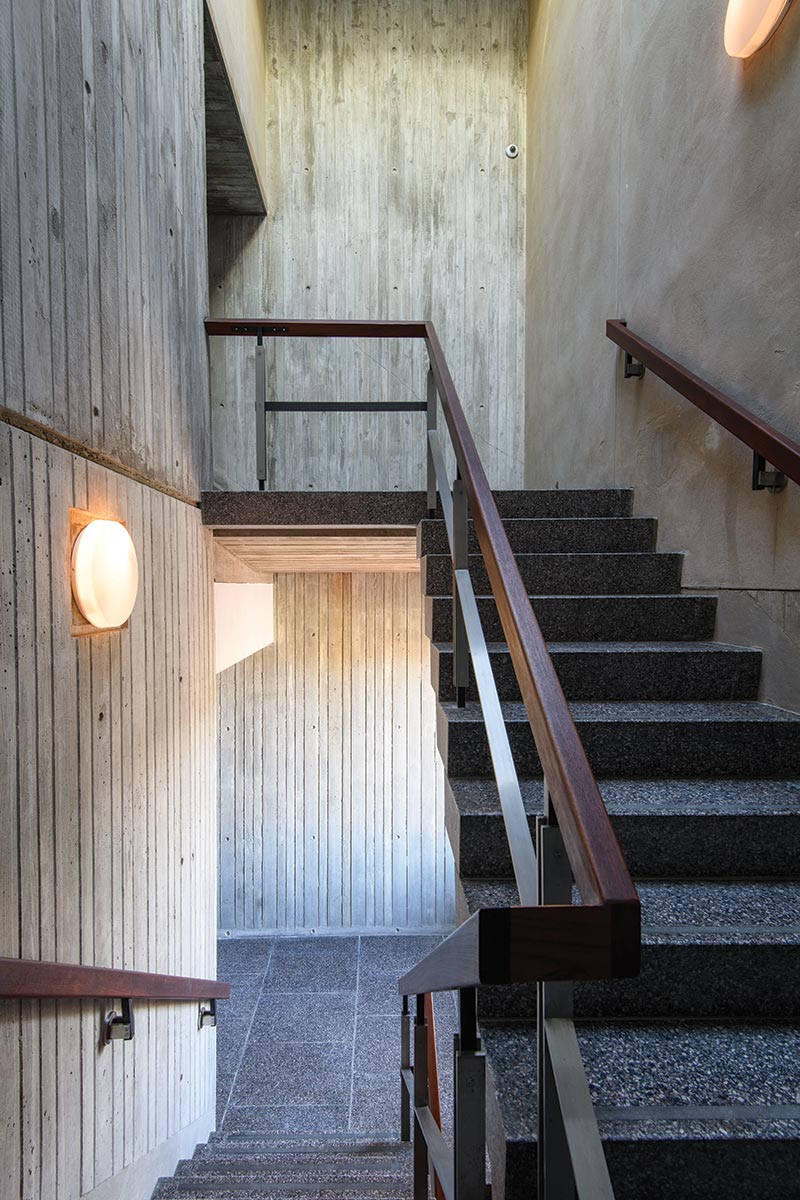 An original stair has been preserved. Photo © Zach Pontz

Dutch East partner Larah Moravek calls the interiors a “soft underbelly to an iconic exoskeleton,” and, to the firm’s credit, the interior design does engage with Breuer’s architectural language: at no point will visitors forget where they are. On the ground floor, the open sweep of the original space is gently broken up into an informal lounge to the right of the entrance and a restaurant to the left, with the building’s 5-foot module, expressed through the windows and ceiling, providing a useful demarcation of scale. These spaces are adorned with artworks selected by—and a few created by—the artist Kraemer Sims Becker, Becker’s wife and the manager of the hotel’s art program.

Upstairs, the guest room floors are similarly respectful of the 5-foot module—“a perfect system of a building,” as project architect Violette de la Selle describes it. Becker and his team reserved their largest formal intervention, the addition of open-air lightwells, for the center of the floor plates where daylight otherwise wouldn’t penetrate, enabling the addition of several guest rooms on each floor. Within the rooms, triple-glazed windows—part of a comprehensive envelope upgrade that also includes high-performance thermal insulation—block sound from I-95 while decreasing energy use. Power-over-ethernet lighting further reduces energy waste and enables guest control via touchscreen. 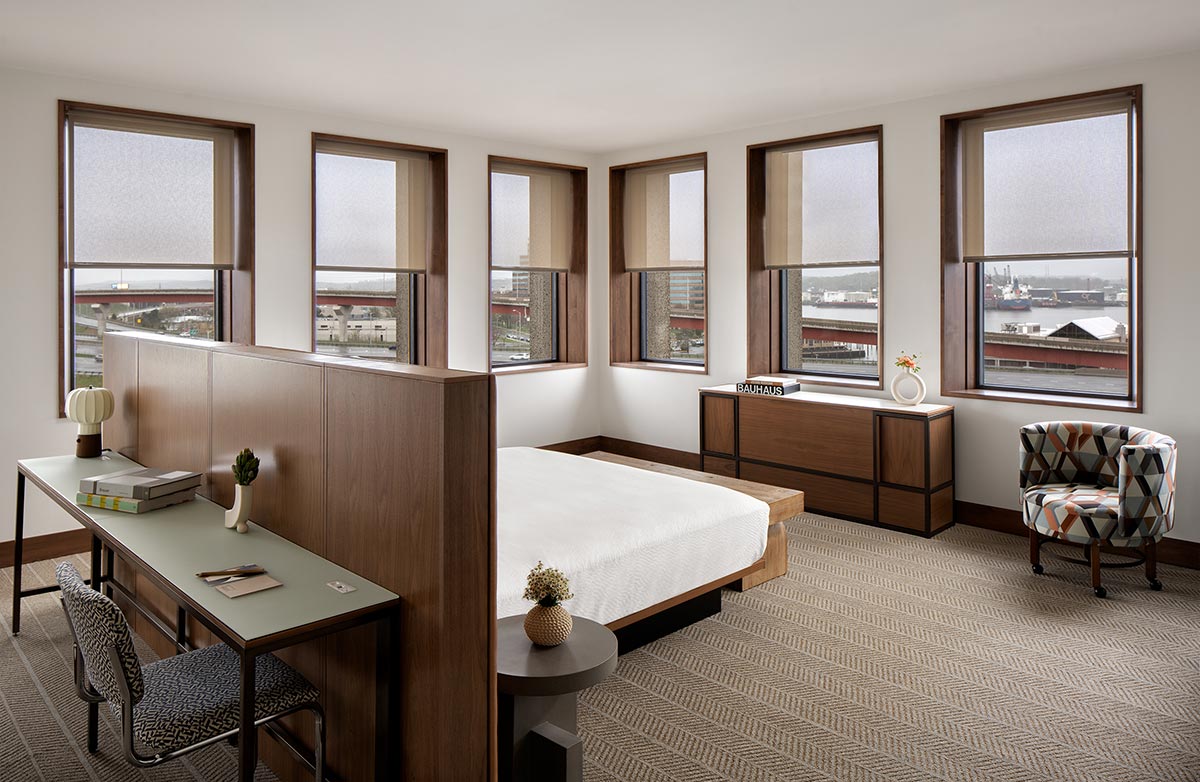 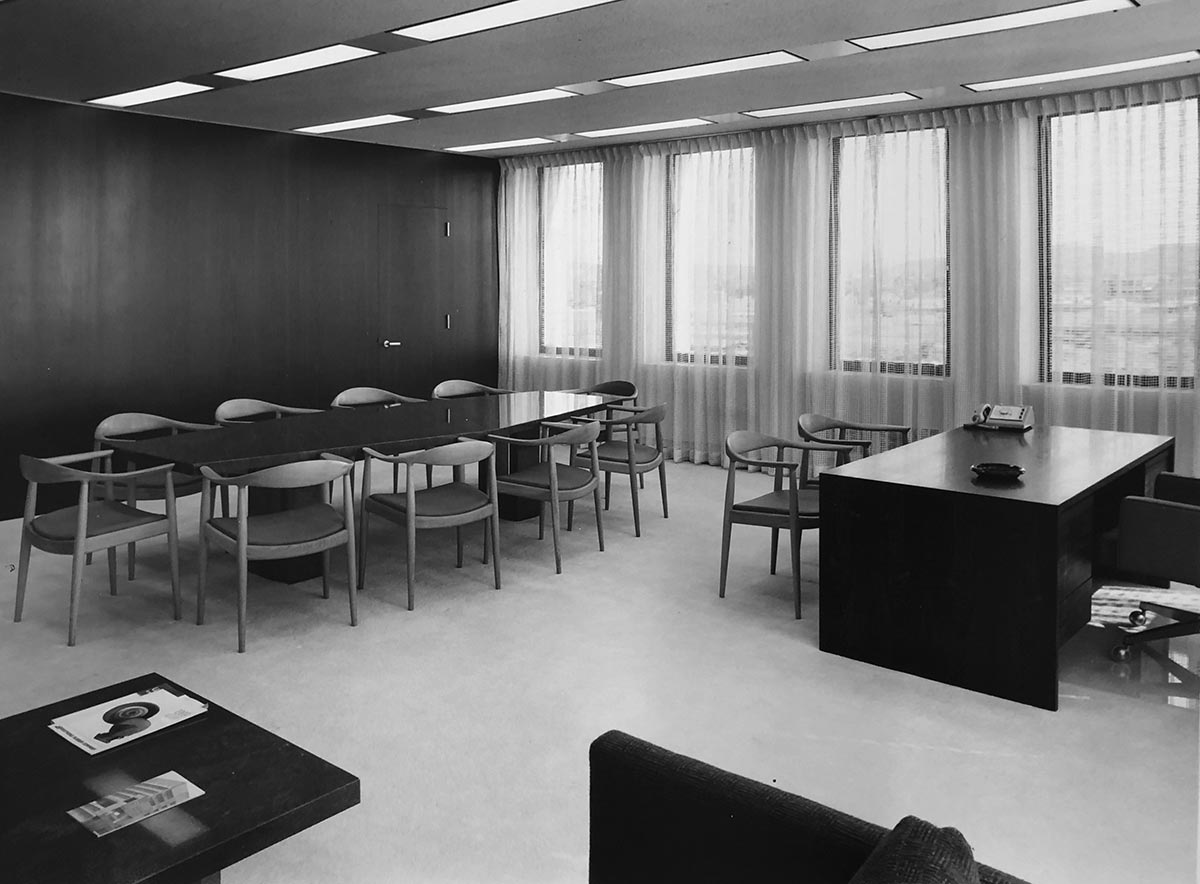 But in many ways, it is the Hotel Marcel’s top floor that is its most remarkable. Formerly housing mechanical systems, it has no outward-facing windows. Traversing its 16-foot-high interiors are seven colossal steel trusses, each weighing in at 50 tons, from which the entire upper volume of the building is suspended. Becker and his team are making this floor accessible for the first time, converting unused space to meeting and event rooms and adding exterior courtyards in place of mechanical wells. The exposed trusses will become central features of these spaces—a sharp contrast to the rest of the building, where the precast-concrete facade conceals a steel structure. The reimagined level is “about making sense of Breuer’s original facade,” Becker says, and, indeed, exposing the trusses—already hinted at on the exterior—reveals the building’s hidden structural logic. 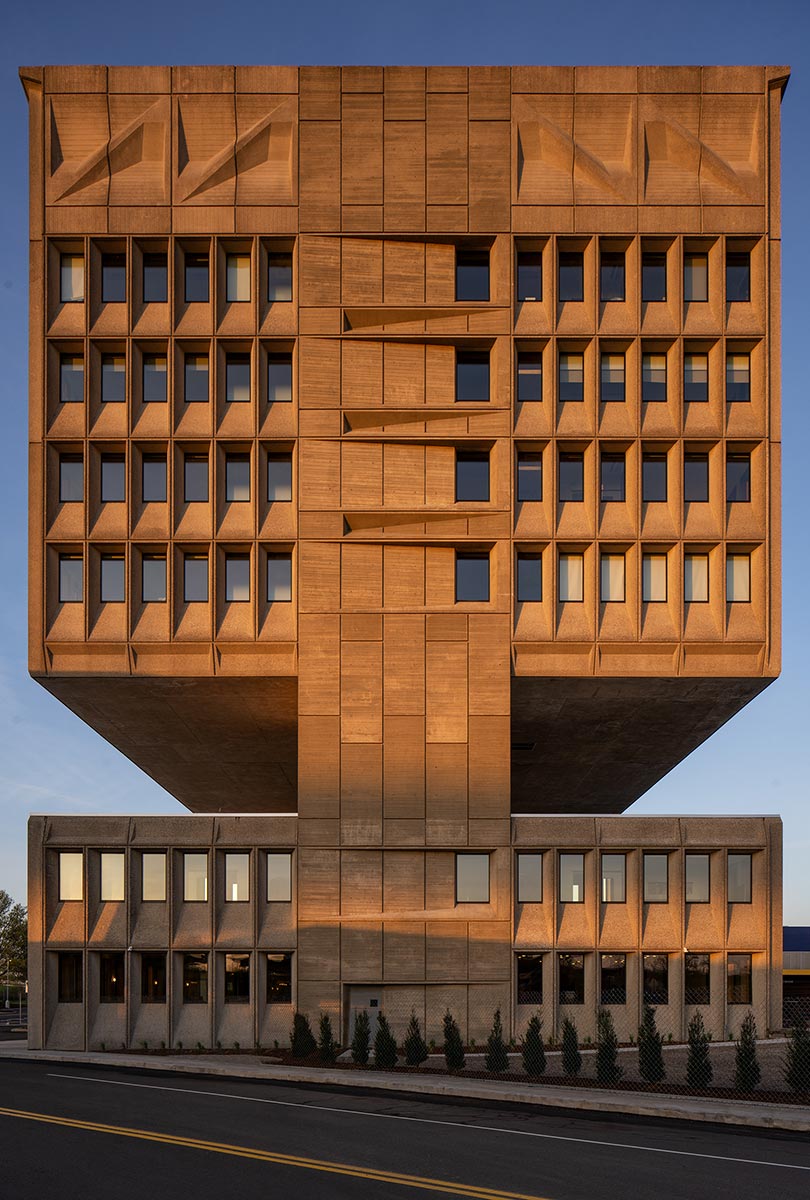 Breuer’s work is easy to appreciate in its new incarnation, and that is one mark of the project’s success. Once you leave the hotel’s urbane interior and return to the outside world of Ikea and I-95, however, the strangeness of the Armstrong Building again starts to set in. Like Philip Johnson’s Kline Tower at Yale University (1966) and Kevin Roche’s Knights of Columbus Tower (1969), Arm­strong is a monument to New Haven’s urban-renewal frenzy—a relic of a heroic vision for the city in which monoliths dot the cityscape and buildings hang from trusses. The more subtle strength of the Hotel Marcel is that it brings the ordinary back to the heroic by inserting into a concrete relic the tried-and-true program of the roadside hotel. At long last, the commercial vernacular has caught up with the Modernist master. 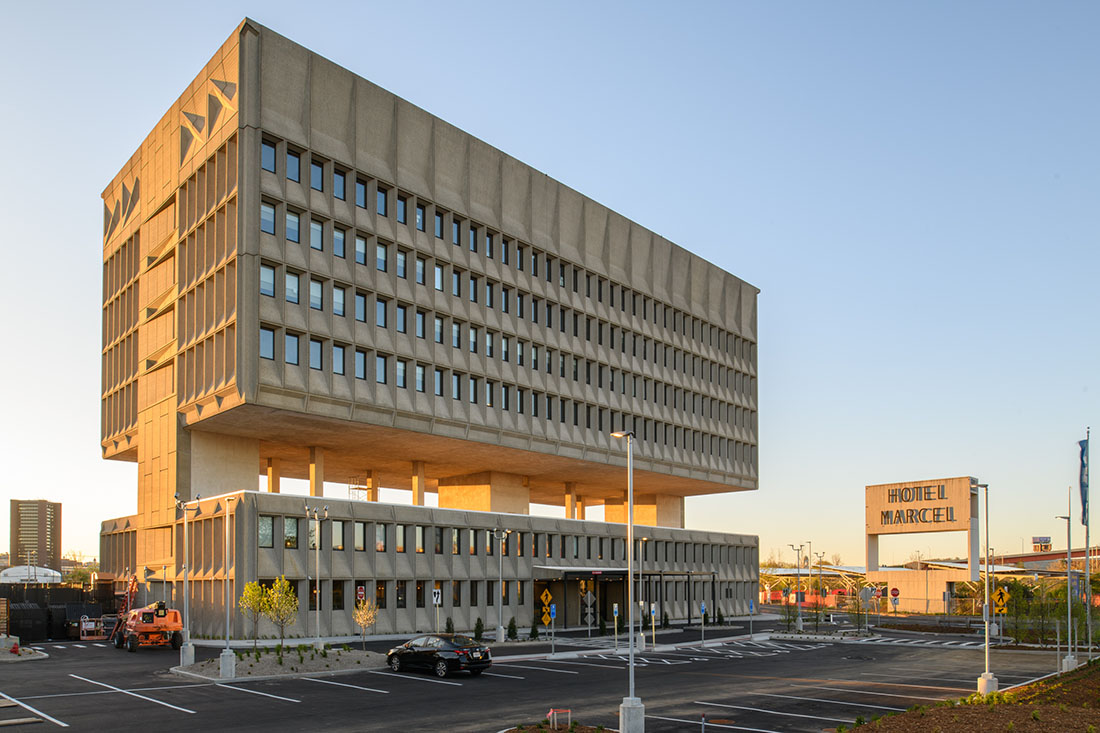 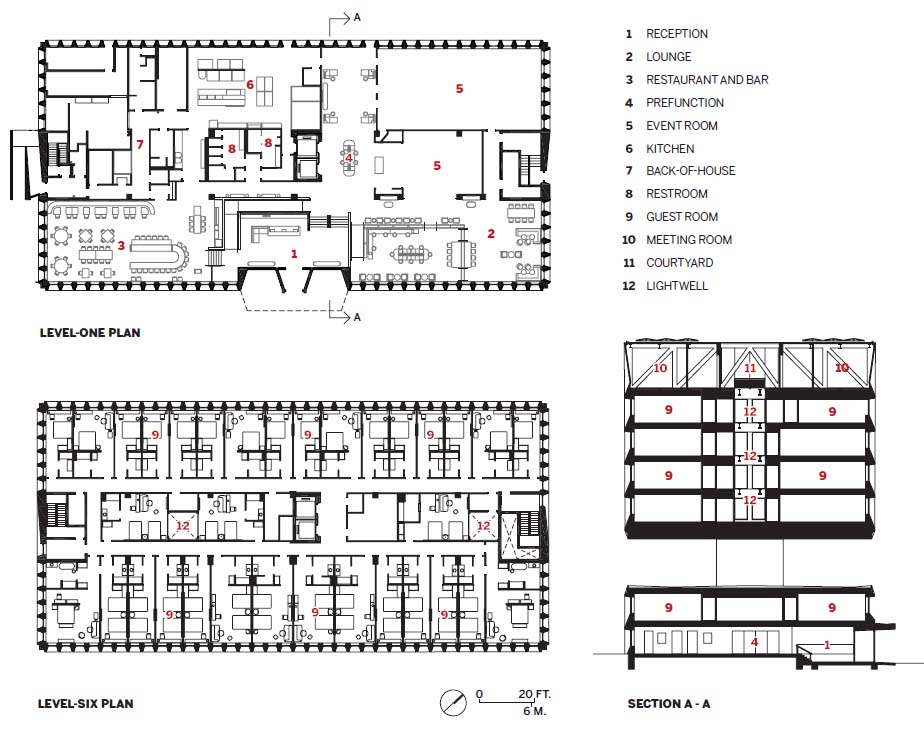