Over the past several decades, China has become an industrial superpower and hired architects like Zaha Hadid and Rem Koolhaas to bring new architectural vocabularies to its capital. But something is changing now, as China’s society undergoes a structural transformation from working to middle class; futurist Beijing has given way to a nostalgic Beijing, one that fondly recollects its own heritage. Mirroring China’s economic shift from industrial production to domestic consumption, Piero Lissoni’s new Shougang Shangri-La hotel transforms one of China’s cathedrals of socialist labor, the former Shougang Steelworks, into a monument to a consumerist society.

At its height, the Shougang Steel Works employed 60,000 workers, who all lived on-site, according to their work unit, or danwei. Like a military barracks or a college campus, China’s enormous socialist factories were a community format all their own. Shougang was founded in 1919 and grew piecemeal during much of the 20th century; the building recommissioned for use as the Shangri-La was erected in 1986. In recent years, as new supply chains and environmental regulations have moved the blast furnaces 150 miles away, to Caofeidian, in Hebei Province, Shougang has made plans to turn Shijingshan, the Beijing suburb that it calls home, into a new urban core, with the Shangri-La anchoring it. The 2022 Winter Olympics saw the debut of this vision, with Shougang’s new town hosting many of the events and its preserved blast furnaces offering a dramatic backdrop for the aerial stunts of competitors like gold medalist Eileen Gu. 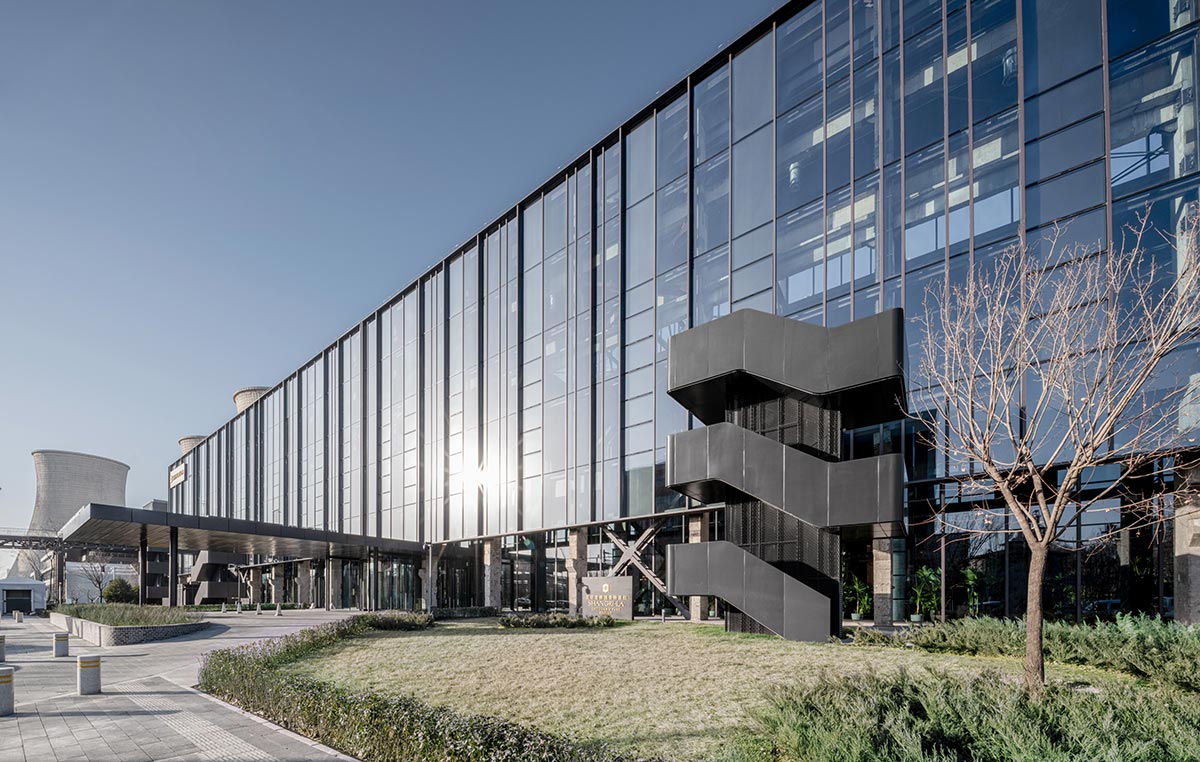 The main public spaces of the hotel (top) sit within the 67-foot-high space of the old factory building, which has been clad with a new, mostly glazed, skin (above). Photo © Tsing Lim, click to enlarge.

From central Beijing, Shougang is only 25 minutes away by subway, but it feels psychologically distant. The area has been transformed into a museum of industry en plein air. Shougang plans to make it into a new high-tech and engineering hub, and lure outdoor-sports enthusiasts to the Olympic facilities. As architects from the Milan-based firm Lissoni Casal Ribeiro brainstormed with their client in the winter of 2019, they brought the historical orientation of Italian architecture—the cathedrals, the piazzas—to the table, and the Shougang executives liked what they heard. 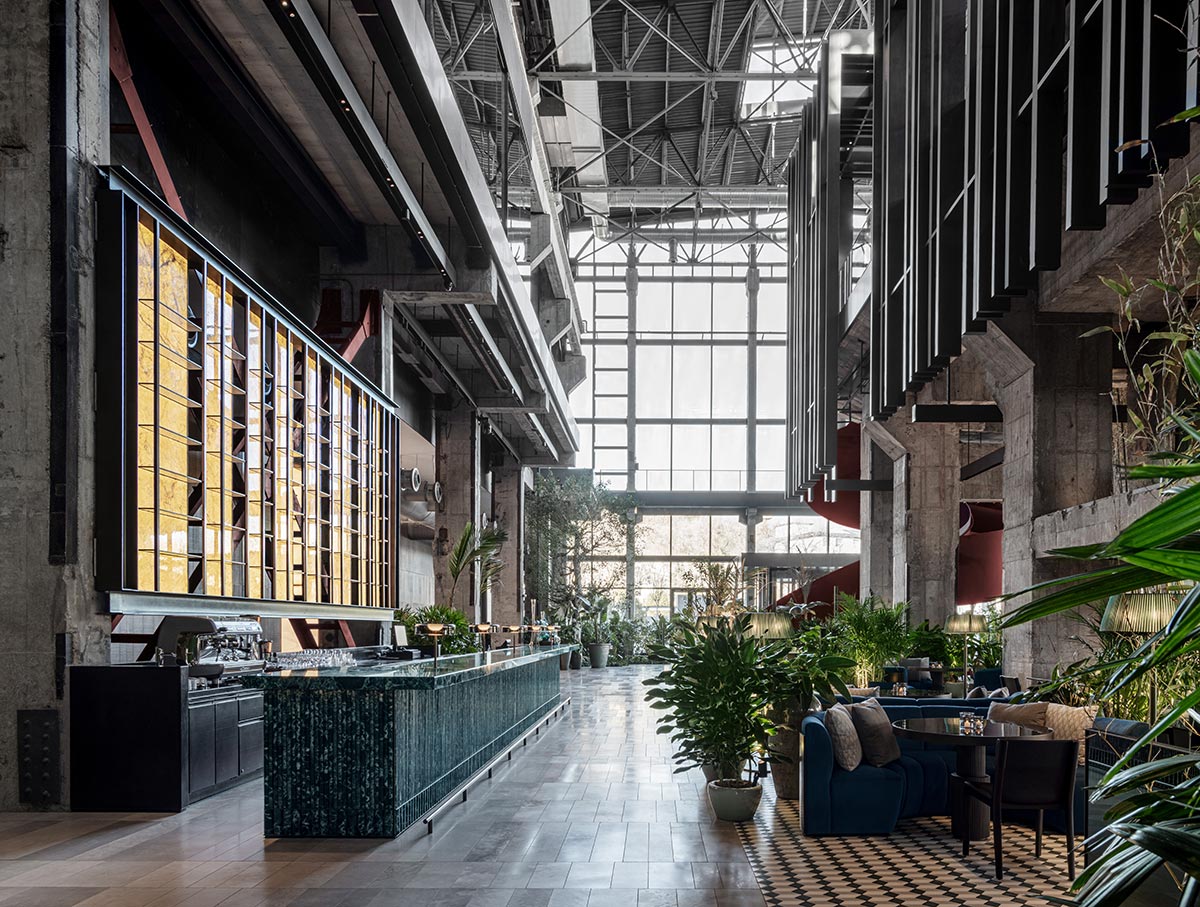 The architects contrasted elegant materials and greenery (1) with the concrete frame and steel roof trusses of the factory (2, during renovation). Photos © Tsing Lim 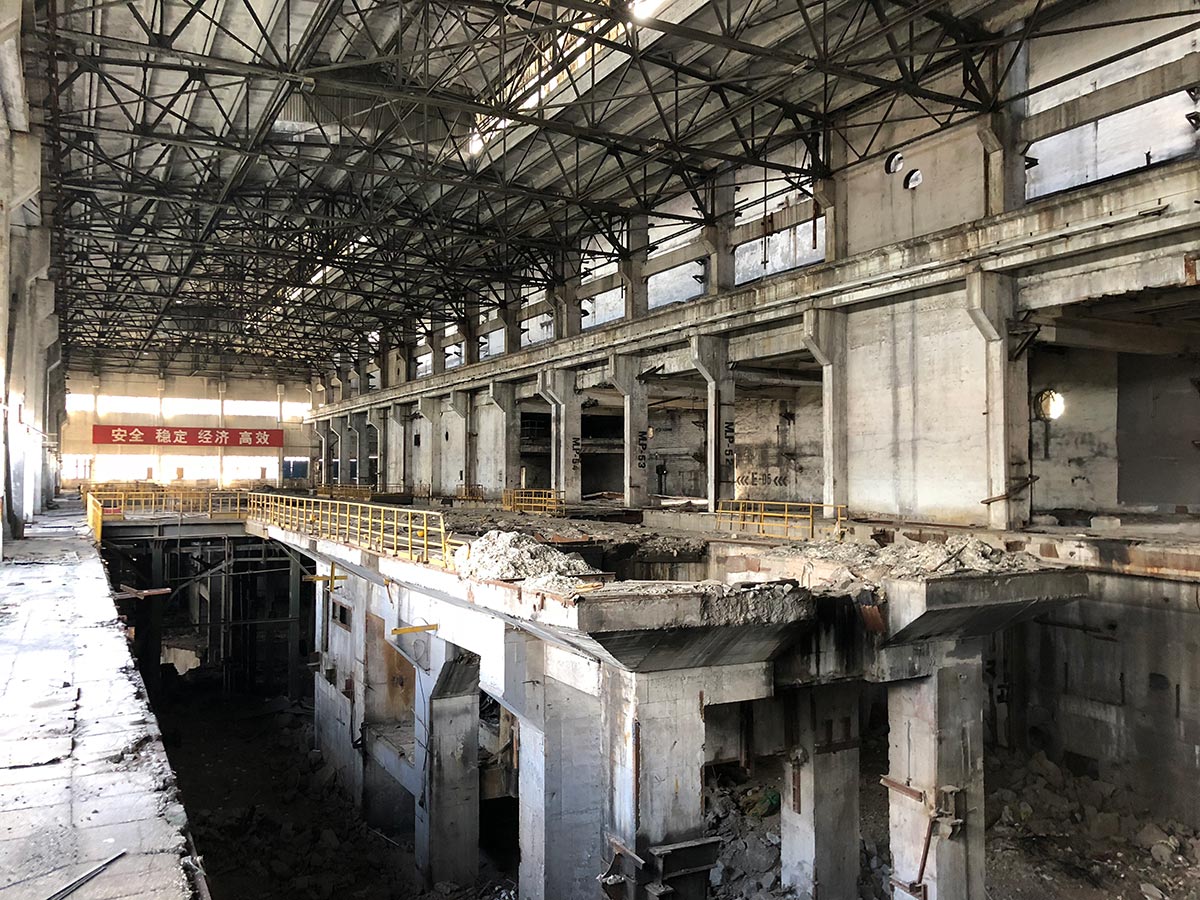 That winter, as Lissoni himself visited Beijing’s old hutong neighborhoods, the Forbidden City, and the 798 Art District, he was reminded of the importance of public spaces for communities to gather in; 798 gave a sense of how a sprawling factory complex can be transformed into a popular mixed-use attraction.

Lissoni’s design for Shangri-La Shuogang Park called for stripping the facades off a 400-foot-long factory building and retaining its concrete frame and steel roof trusses, which were still in good condition, says the architect. Today, the exposed bones of the building house a variety of lounges, restaurants, and bars on the ground floor, all open to the public and punctuated with enough potted trees and plants to create the sense of an indoor garden. In a grey city like Beijing, plants are particularly welcome, and the team carefully combined daylight with custom-designed light sources, as well as a water feature in the lobby bar, to tie it all together. To reduce solar loads inside, Lissoni designed the new skin with low-E glass and operable windows that allow natural ventilation. In addition, vertical strips have back-painted glass in front of insulated wall panels, protecting interior spaces from the sun while retaining the look of a fully glazed elevation. 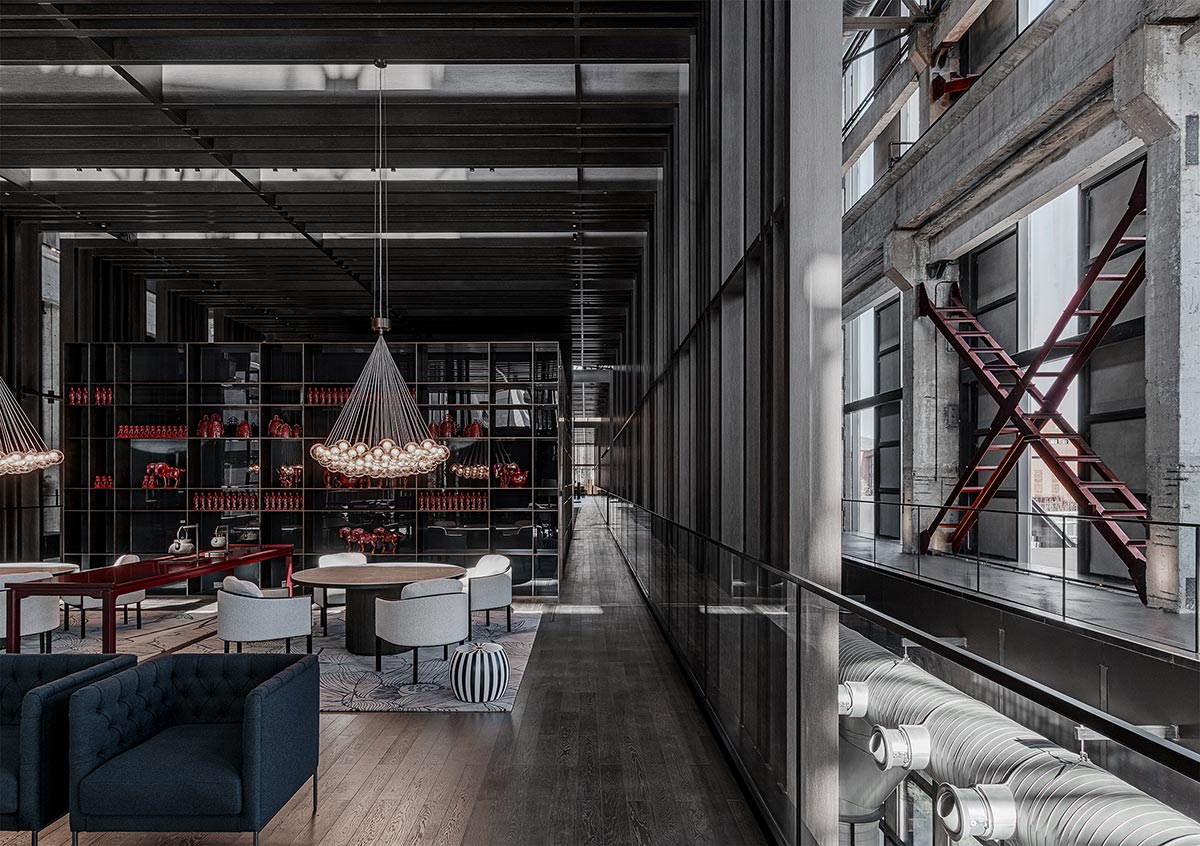 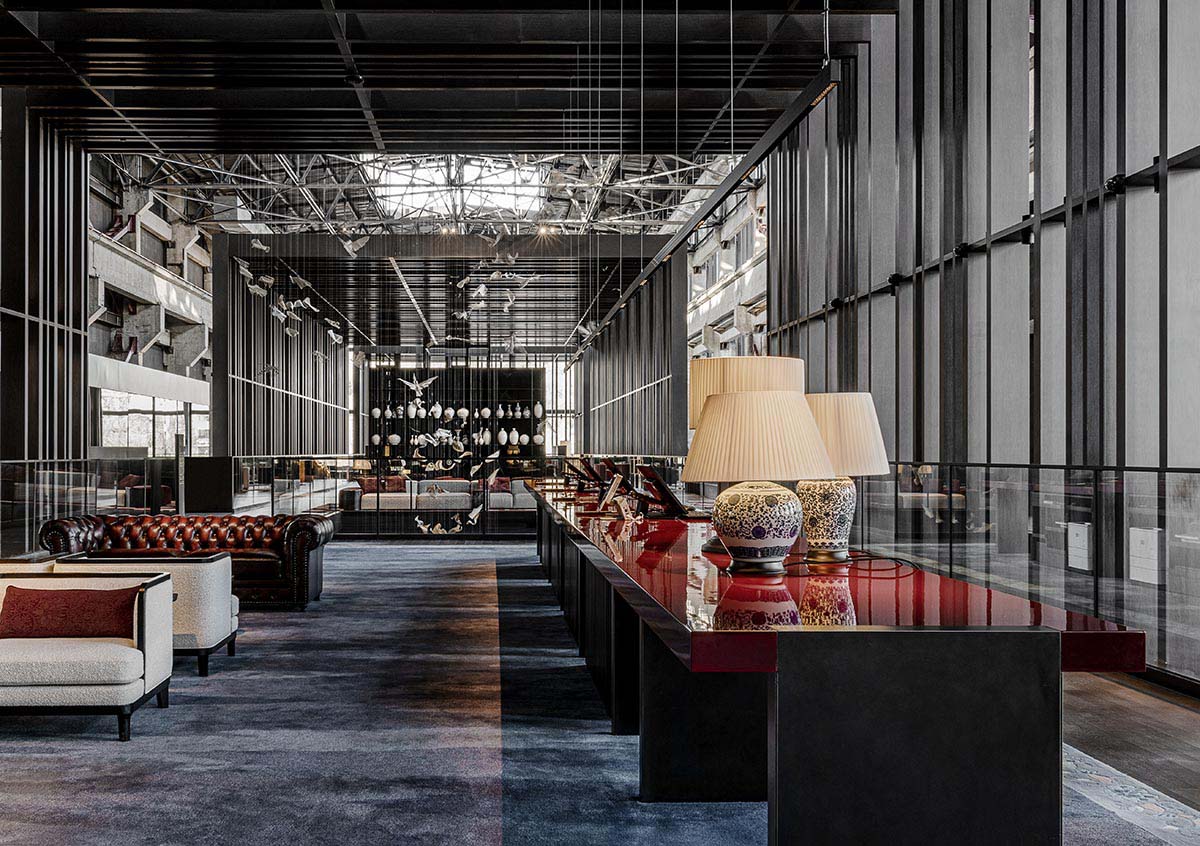 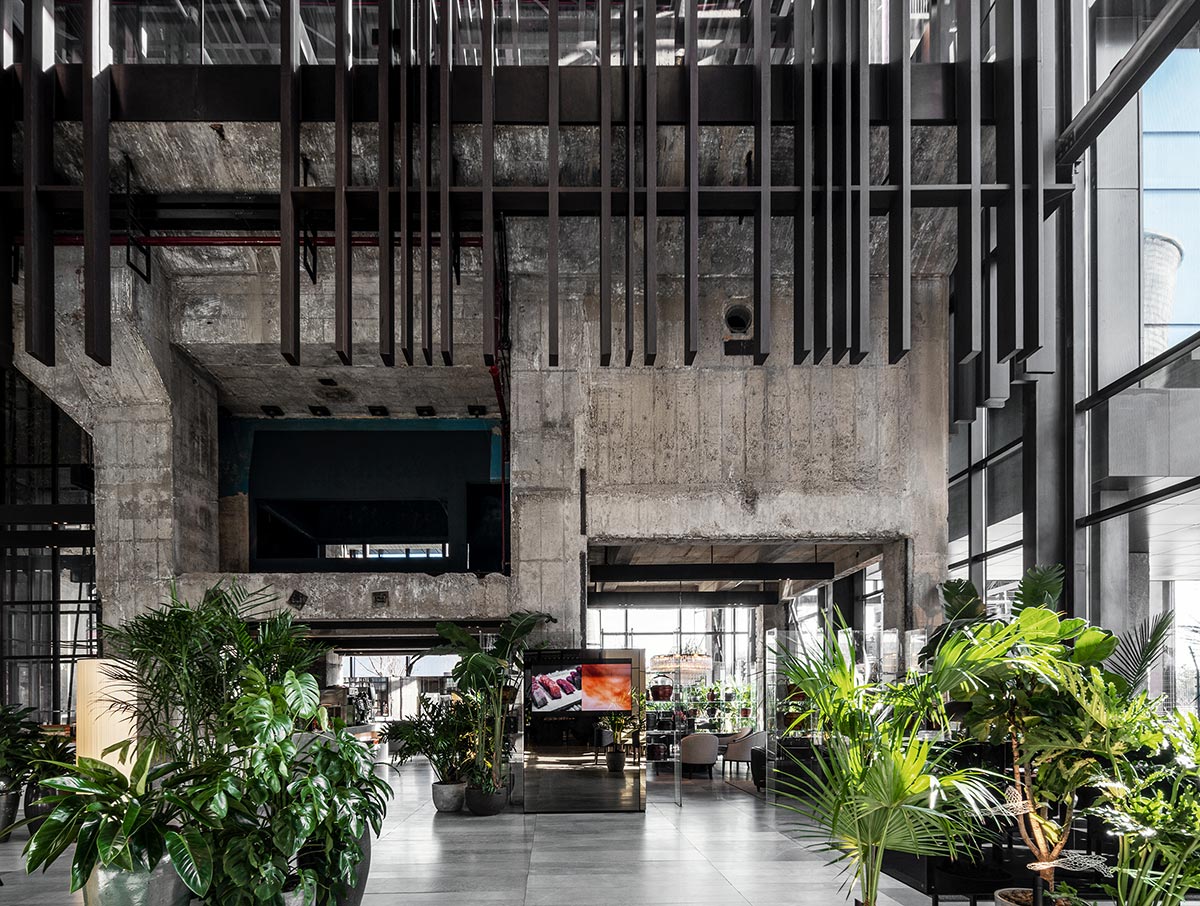 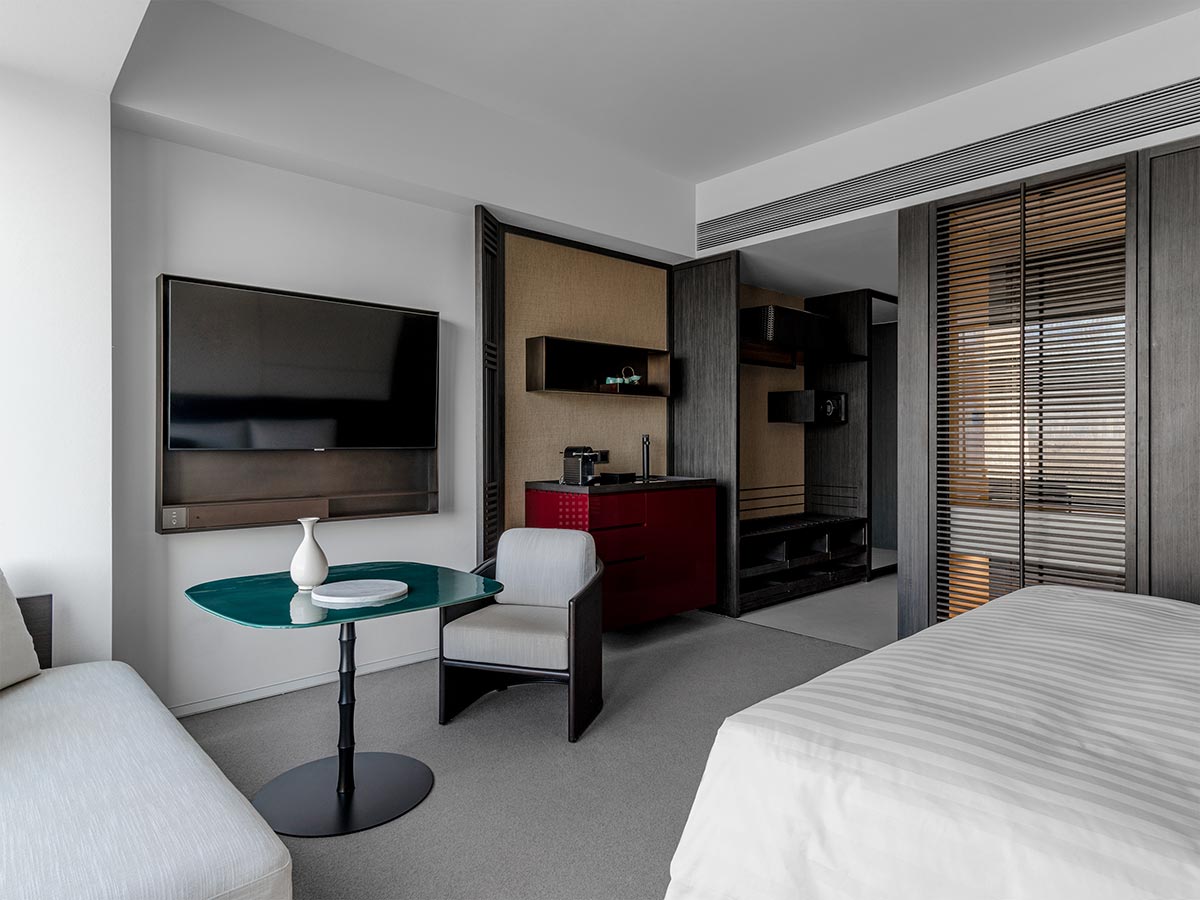 Taking advantage of the 67-foot height of the old structure, the architects inserted a mezzanine that holds the hotel lobby and more lounges, and then enclosed these spaces in a “nest” of wood slats. A fully glazed volume, also nestled within the old structure, contains a fitness center with swimming pool and gym, while a new concrete-frame building, running parallel to the old one, houses 280 hotel rooms and is connected by an elevated steel bridge across an outdoor courtyard. Although a five-star hotel, the Shangri-La hopes to attract locals to use its recreational facilities and restaurants and will host markets for local producers—giving life to a new community in a way that echoes the history of Chinese danwei work compounds. 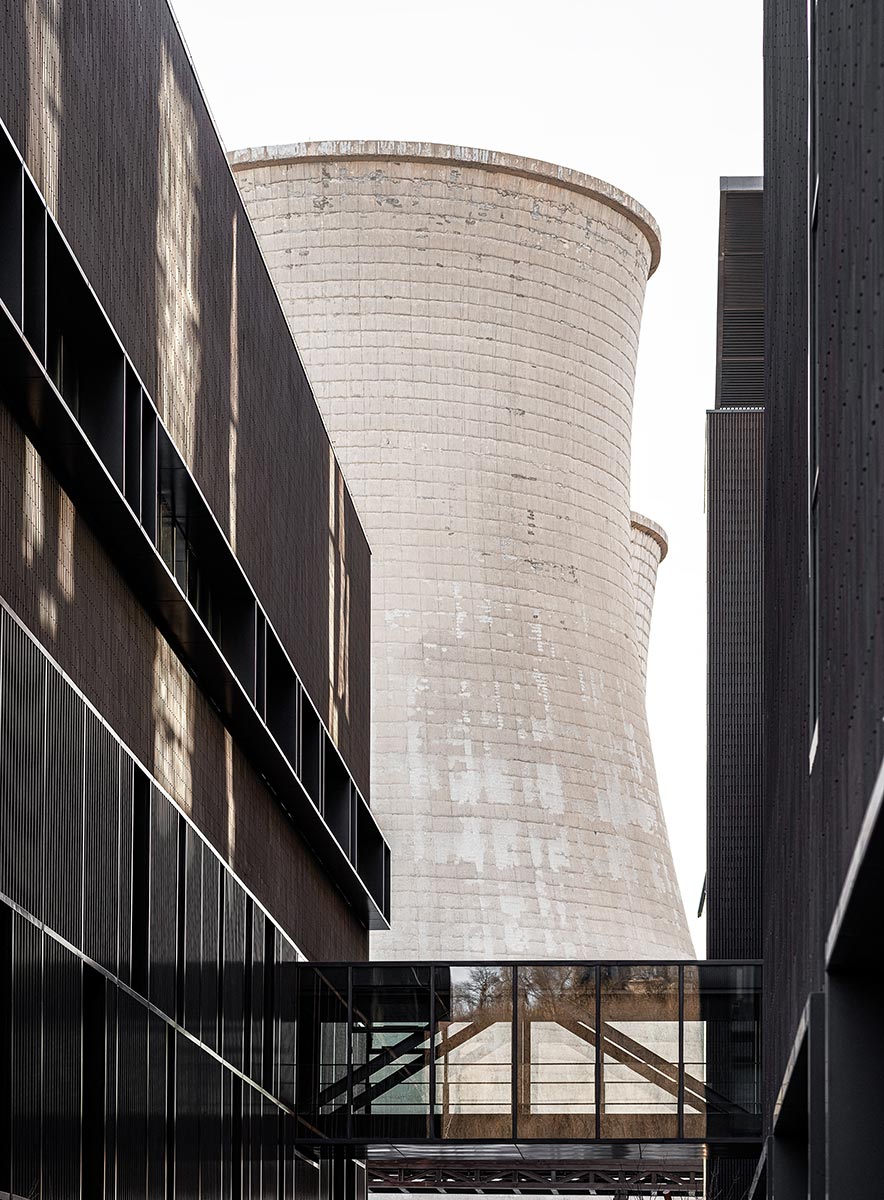 “When designing the buildings, we had a great opportunity to work between architecture, interiors, and landscape—a total environment—creating the sense of being in the middle of gardens, inside and out,” says Tania Zaneboni, a partner at Lissoni Casal Ribeiro and the interior design coordinator for the project.

Beijing sits in a desert zone, so making the project sustainable wasn’t easy. To meet codes that limit the overall opacity of the project’s facades to 30 percent, Lissoni used specially glazed tiles placed one by one on the new building, to create ventilated facade walls that allow air to flow between them.

“Old structures need to be respected, and this building connects to another moment of Chinese life,” Lissoni told RECORD. As Beijing has grown, its ring roads have marked time, like the rings of a tree. Now the capital city has engulfed Shougang and is incorporating its heritage into the middle-class metropolis that Beijing has become. 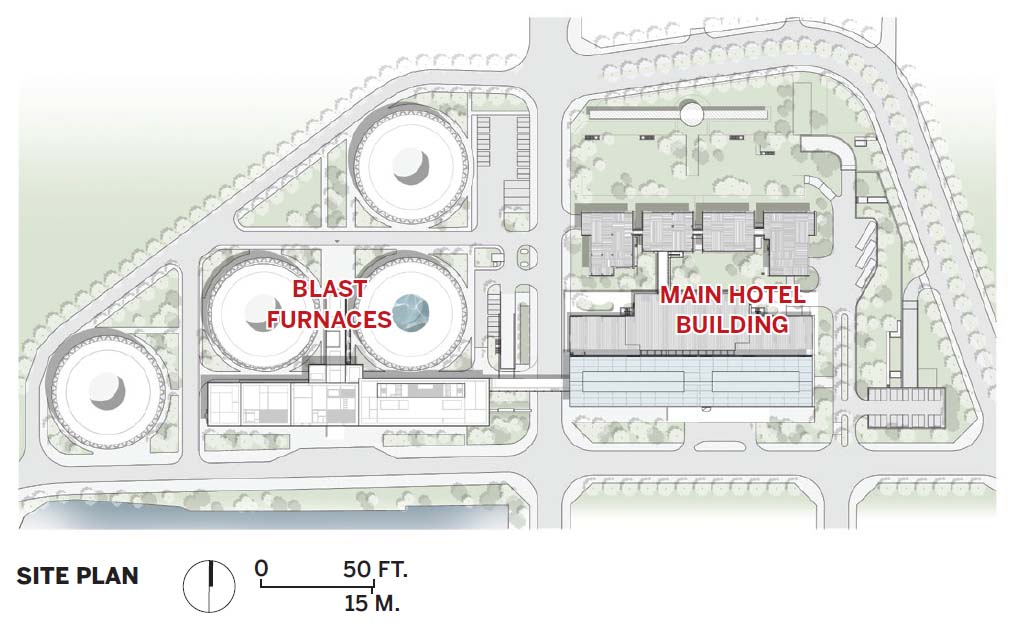 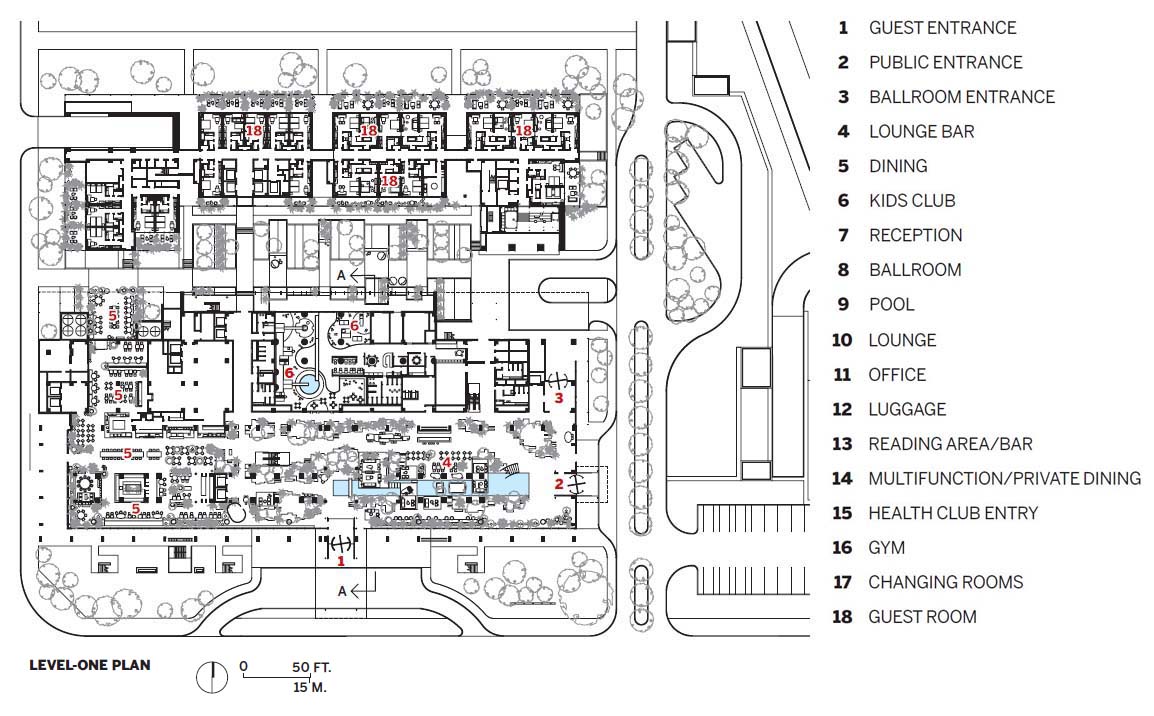 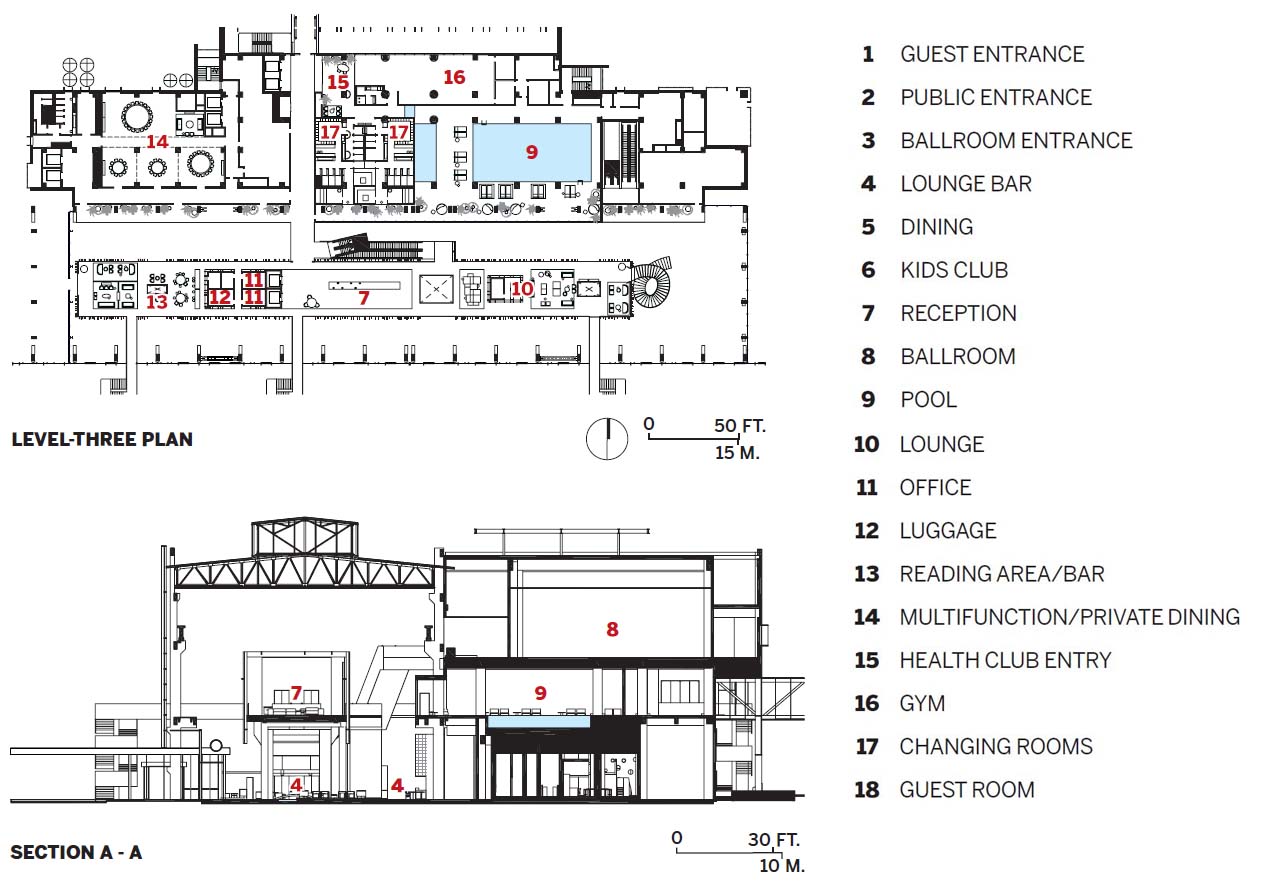 Jacob Dreyer is a writer and editor based in Shanghai.