Tessa Kelly and Chris Parkinson, the founders of Group AU, worked at architecture firms in New Haven, Connecticut, for a few years after getting their master’s degrees (Kelly at Harvard, Parkinson at Yale). In 2016, they moved to Pittsfield, Massachusetts, establishing their firm the next year. What brought the architects, who are both 37 and grew up in the area, to Pittsfield was The Mastheads, a public arts project with five mobile writing studios, built by the couple, for which they received a grant from the National Endowment for the Arts. The Mastheads, completed in 2017, sponsors summer residencies and other programs, providing places for writers to work as it commemorates the famous 19th-century writers who spent time in the city: Melville, Hawthorne, Longfellow, Thoreau, and Oliver Wendell Holmes Sr. Says Kelly, “We discovered a unique niche for ourselves—to understand the needs that the community had. We learned how to write grants to support our fees. You don’t have to wait for a client to come to you with fully formed ideas; you can initiate your own solutions.” 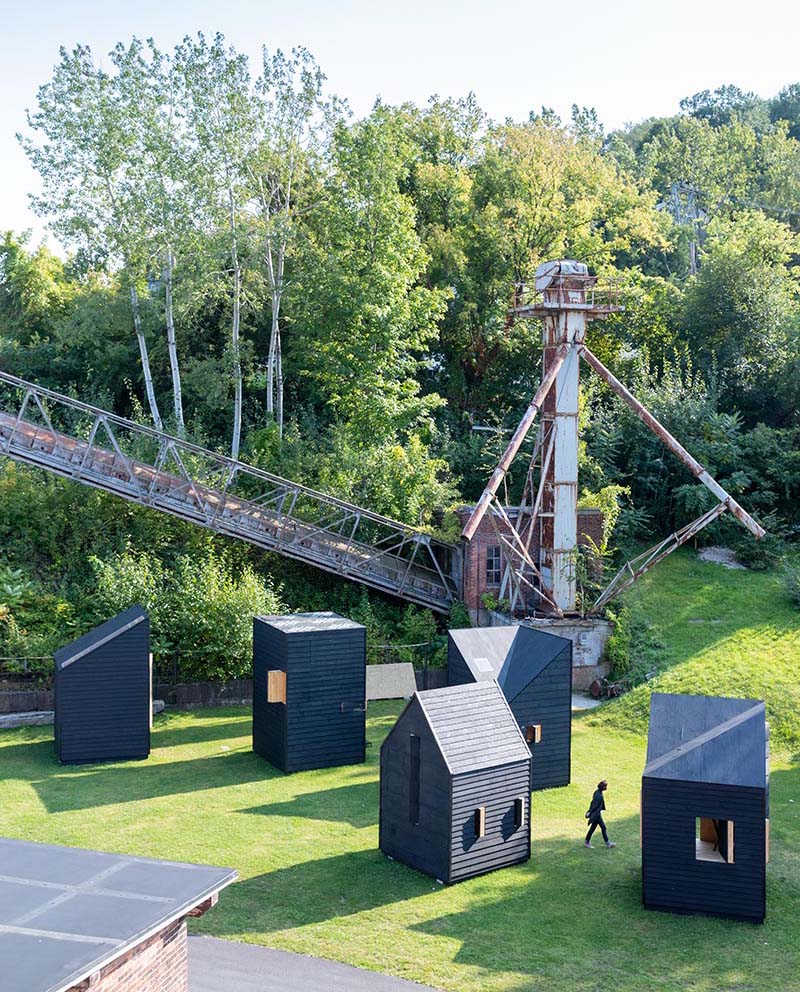 The Mastheads: Five writing studios each represent an author who worked in Pittsfield in the mid-19th century. The individual studios are on wheels, and can be situated in different relationships to the surrounding environment, urban or natural, on a seasonal basis. Photo © Iwan Baan, click to enlarge.

Since then, they have designed the Westside Riverway Park (2021), developed over two years with the racially diverse community. The park’s sculpted lawns and wildflower borders frame a long, slender pavilion, for concerts and block parties, with a canoe launch on the Housatonic River. Alphabet Park (2021), with its 26 concrete forms in the shape of letters, was developed in collaboration with Morningside Community School, in a high-poverty neighborhood. The park is used for readings and concerts, and the letters are used for climbing, jumping, and perching. It was this emphasis on community-based projects that led the architects to change the name of their practice last year from ARCADE to Group AU—the “A” is for architecture, the “U” is for urbanism, and the “Group” reflects their interactions with communities, schools, thinkers, academics, and artists. 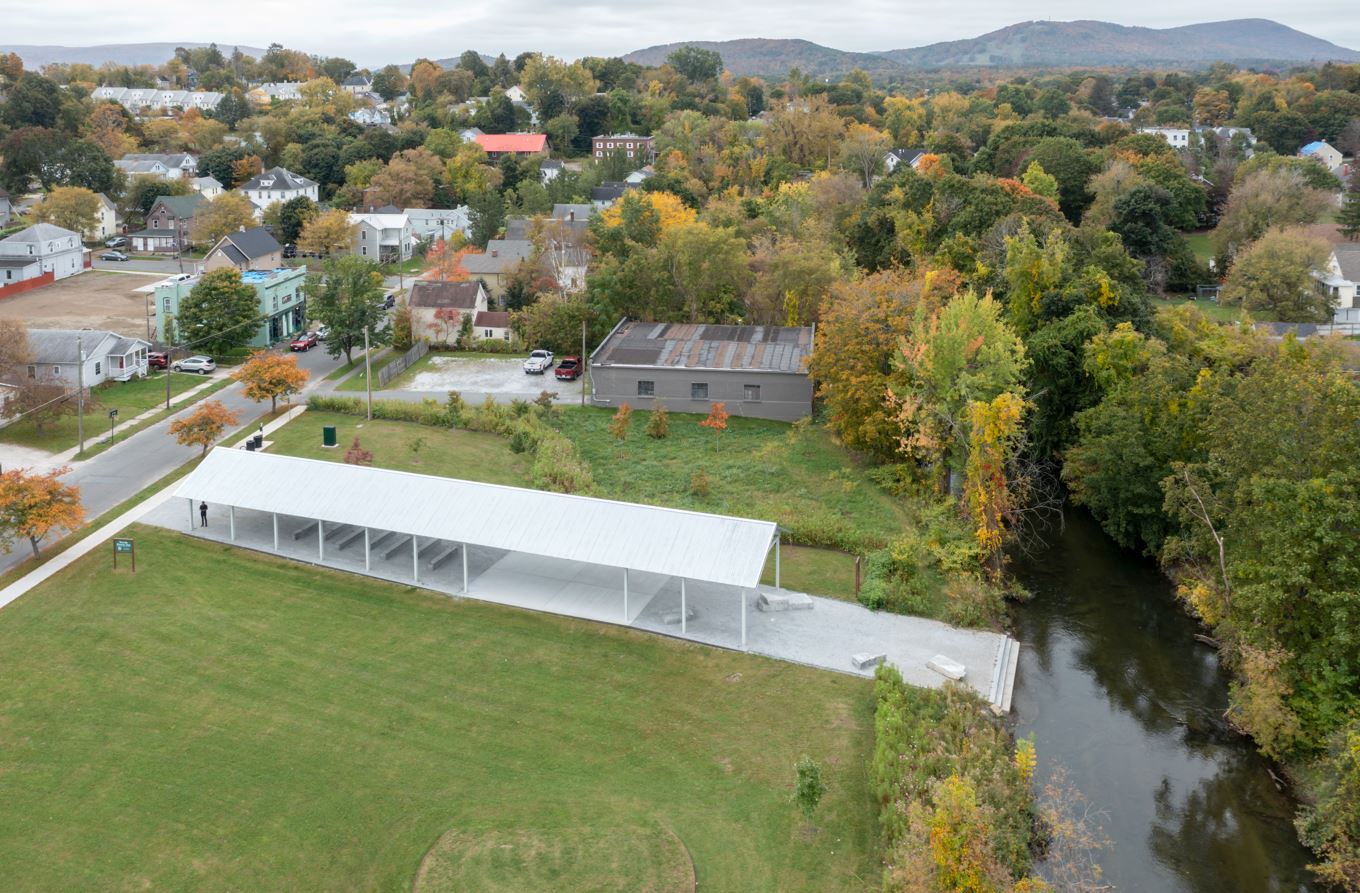 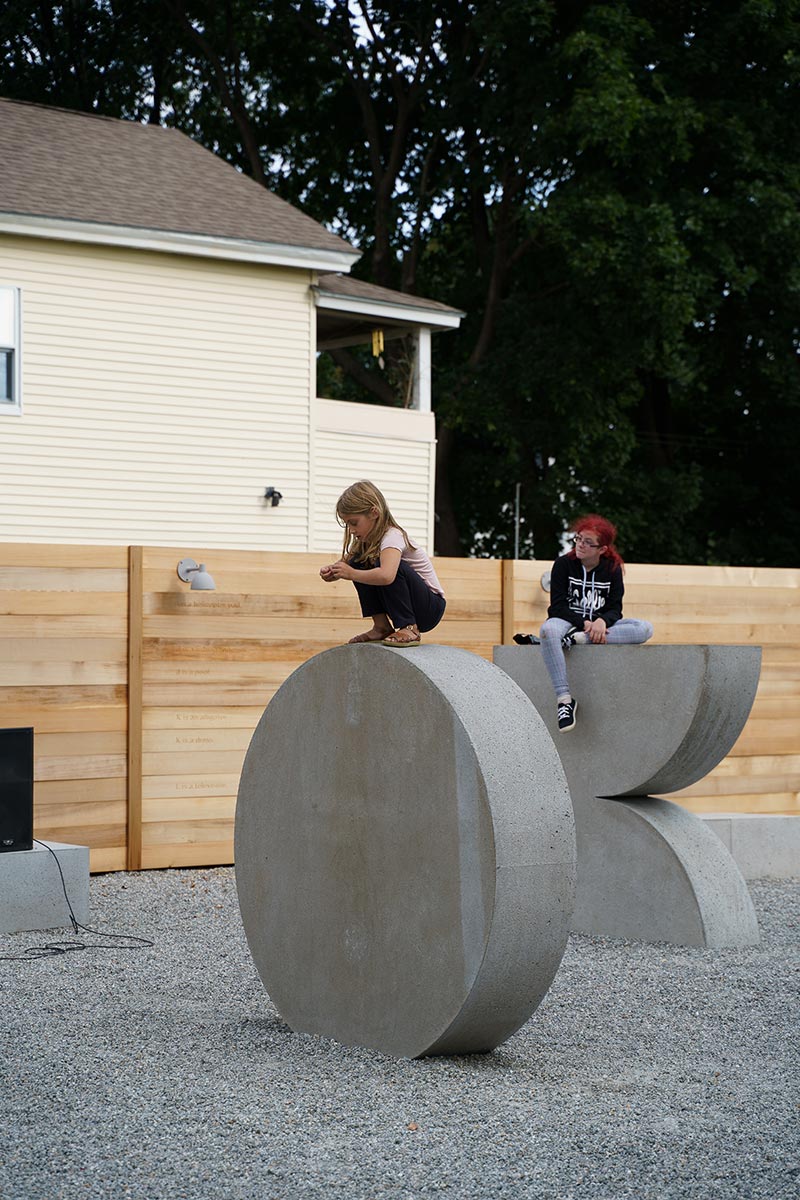 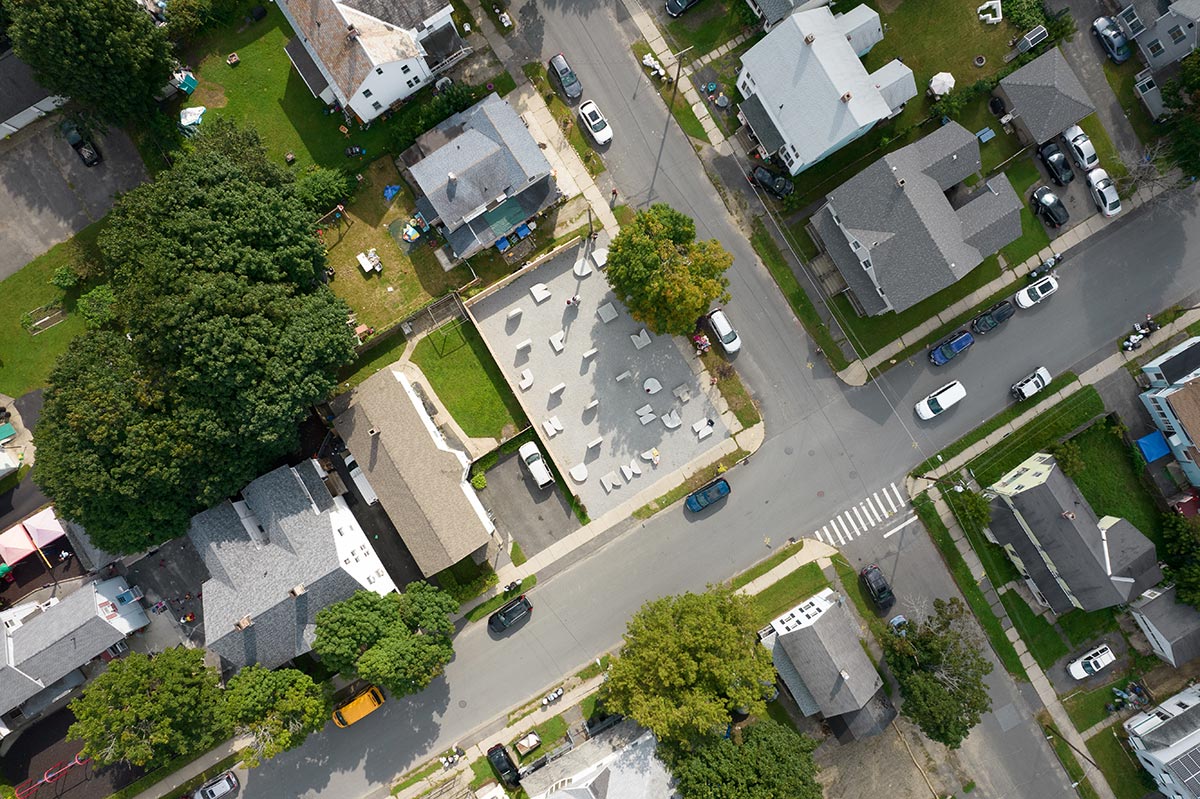 Alphabet Park: Group AU developed the literary park program and design in collaboration with Morningside Community School as a place for residents of all ages to explore and relax. The design of the letters is based on a 60-inch-square mold, within which a radius curve can be repositioned within four corner quadrants to create each letter (1 & 2). Photos © Justin Allen

Kelly and Parkinson have done several residential projects, like a circular library (2017) in a historic carriage house in Old Lyme, Connecticut, and the Peacock Kitchen (2020), a thoughtful renovation of a 1970s house in Williamstown, Massachusetts. The Purple Valley House, also in Williamstown and currently under construction, is a sleek one-story building with accents of bright color, for a client in his 80s with a collection of Mies van der Rohe furniture. 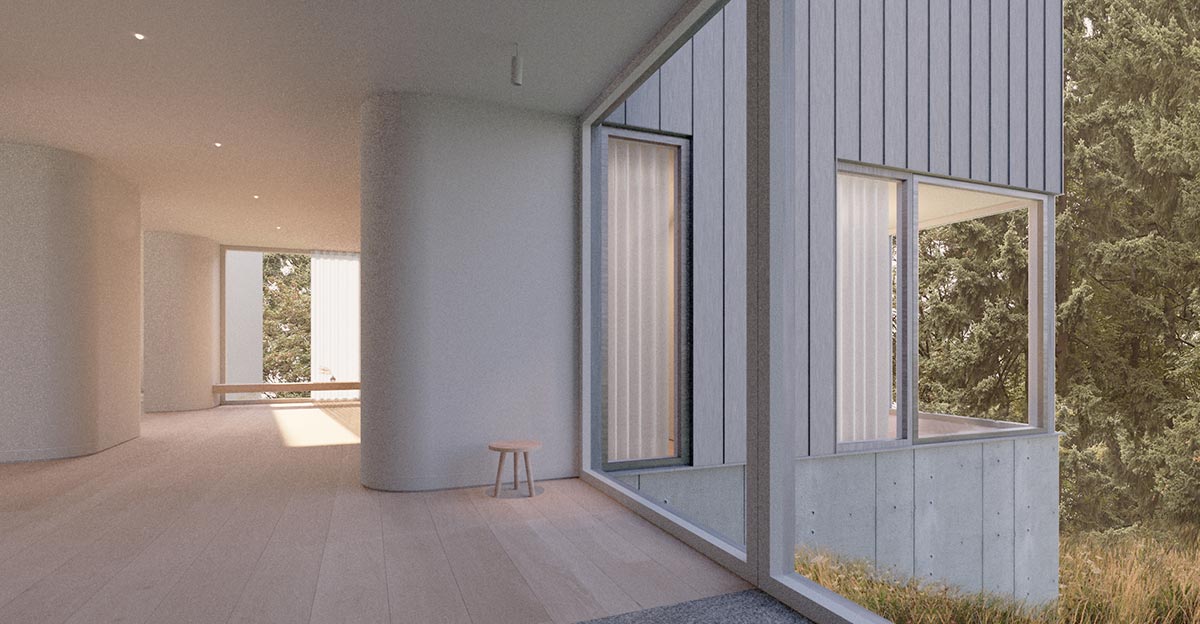 Sweet Farm House: Currently under construction, this residence on a wooded site is meant to be an aging-in-place home. The exterior of the house engages with the verticality of the surrounding trees. The interior is shaped of soft curves. Image courtesy Group AU

Parkinson notes that he and Kelly have started a general contracting business and that, even with a growing roster of residential projects (and higher fees compared to community-based ventures), “We’re working back toward public projects now.” Kelly adds, “We had to take stock six months ago. We don’t want to leave behind this work.” Three new community-based projects are on the horizon, so Pittsfield has plenty to look forward to. 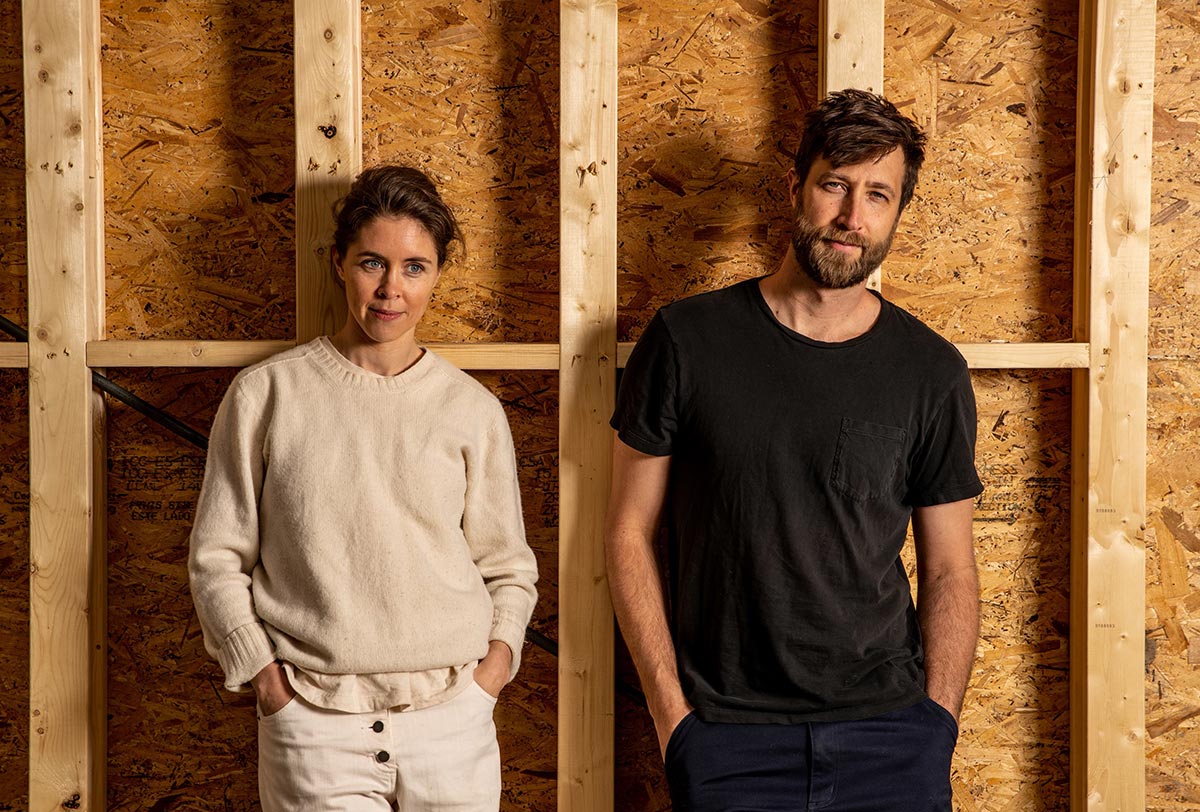 Back to Design Vanguard 2022
KEYWORDS: Massachusetts