A little more than two years after the onset of the Covid-19 pandemic, the American Institute of Architects’ Conference on Architecture—the largest architecture convention in the country—returned this week for the first time since 2019. Hosted at the 2.7-million-square-foot McCormick Center in Chicago, the conference has brought together thousands of architects from across the country for four packed days of sessions, keynote speeches, parties, award ceremonies, and chance encounters on the expo floor.

Chicago’s celebrated architecture and enduring importance within the profession helped draw architects to the conference to make up for two years of missed in-person gatherings. Among the events on offer have been office visits to major Chicago firms, including Studio Gang, JGMA Architects, and Adrian Smith + Gordon Gill Architecture, as well as river cruises, and tours of Chicago neighborhoods and landmarks.

“Beyond the tall building, Chicago is home to the automatic coffee maker, zippers, the electric blues, and house music,” Chicago Sun-Times architecture critic Lee Bey joked to an enthusiastic crowd at the Wednesday opening keynote. Architects, he suggested, should learn to see the city as a cultural whole rather than a collection of famous works of architecture.

Marking 165 years since the founding of the AIA, the organization’s recently appointed CEO Lakisha Woods and 2022 president Dan Hart outlined a vision for its future as an advocacy group and unifying force within the profession. “The last few years have shown that the future will be led by nimble, well-rounded, culturally attuned organizations, because these qualities are valued by the public,” said Woods, arguing that a new focus on equity and climate action will help transform the AIA into one such organization.

Thursday began with a second keynote event featuring a conversation moderated by Bey with Studio Gang founder Jeanne Gang; Practice for Architecture and Urbanism founder Vishaan Chakrabarti; and Renée Cheng, the dean of the College of Built Environments at the University of Washington. Each of the speakers touched on the difficult questions of architecture’s agency in an era of profound social inequity and mounting environmental crises.

In order to attract future generations to study and practice architecture, the profession’s norms of long hours and low pay must change, Cheng said, echoing concerns expressed by students and workers across the country in recent years. Otherwise, she suggested, bright young people might not even think to enter the field. “There are brains at work that are not even thinking about architecture,” she said. 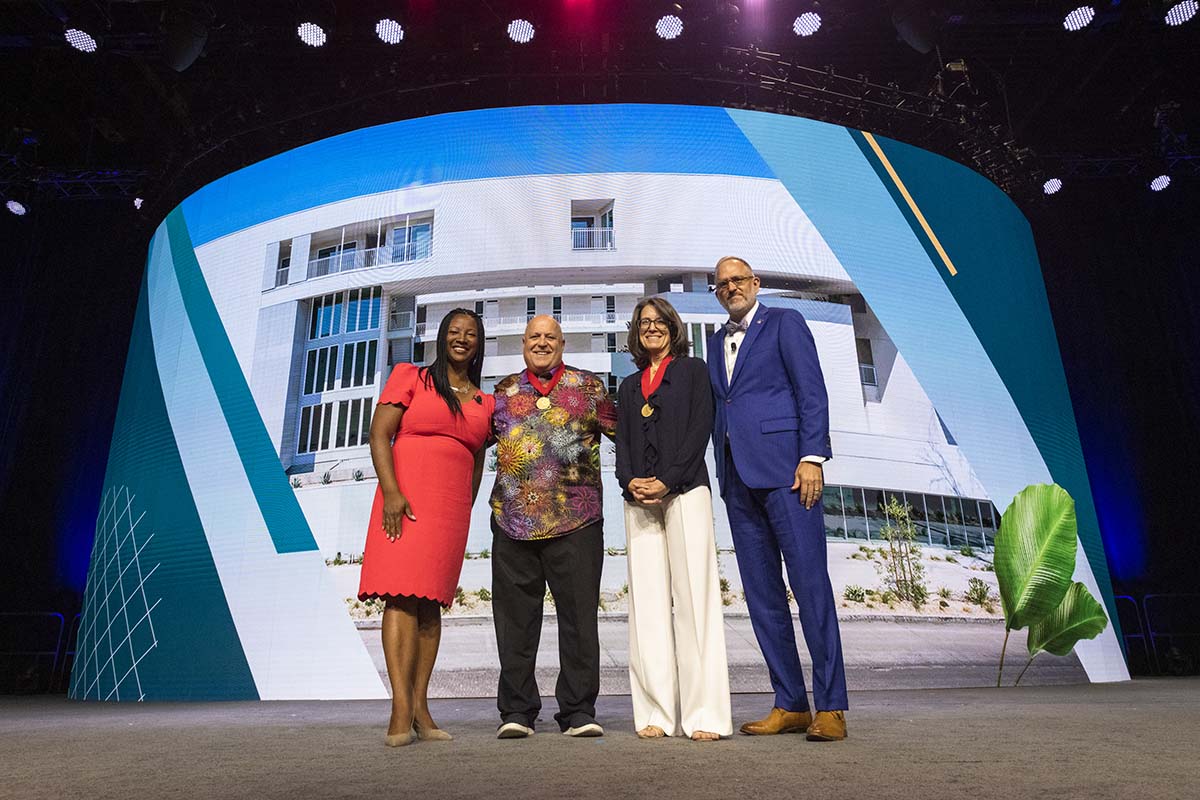 The winners of several years’ worth of AIA awards were also honored at the conference, including Gold Medal laureates Angela Brooks and Lawrence Scarpa (2022), Edward Mazria (2021), and Marlon Blackwell (2020); as well as Architecture Firm Award winners MASS Design Group (2022), Moody Nolan (2021), and Architecture Research Office (2020). On Thursday night at Crown Hall, the Mies van der Rohe-designed home of the College of Architecture at the Illinois Institute of Technology, the winners collectively celebrated at a reception with live music and cocktails named for each winning firm.

On Friday afternoon, the conference will culminate with a third keynote event headlined by former President Barack Obama. Obama, who still has a home in Chicago, selected Jackson Park on the city’s South Side as the site of his presidential library—a controversial project that was delayed for years but is now under construction. (The library, designed by Tod Williams Billie Tsien Architects, has been the subject of several sessions at the conference.)

As of late Thursday, just under 12,000 people had registered for this year’s convention, and the AIA anticipates a total of around 15,000 attendees, a representative told RECORD. (Around 16,000 people attended the 2019 convention.) All are required to submit proof of vaccination or a negative Covid-19 test, but in line with Chicago public health guidance, masks have not been required at conference events.