Joann Gonchar, FAIA
No Comments
This interview appears in the March/April 2014 issue of GreenSource. Stephen Selkowitz, photographed by Eric Millette on February 11, 2014, at LBNL's FLEXLab in Berkeley, California.  Stephen Selkowitz is leader of the windows and envelope-materials group and senior advisor for building science at Lawrence Berkeley National Laboratory (LBNL) in Berkeley, California. From 1985 to 2011, he headed LBNL’s building-technologies department, where he was the driving force behind a just-completed plug-and-play testing complex, the Facility for Low Energy Experiments (FLEXLab). Here users can mock up and evaluate the performance of proposed designs with actual building components such as cladding, windows, lighting,
Read More 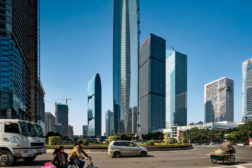 In the realm of supertall skyscrapers, the recently completed Pearl River Tower (PRT) in Guangzhou, China, isn't that tall.

Order in the Court: A multidisciplinary design team applies a light and skillful touch to restore luster to a faded Lower Manhattan landmark while bringing it up to current standards.
Joann Gonchar, FAIA
No Comments

A multidisciplinary design team applies a light and skillful touch to restore luster to a faded Lower Manhattan landmark while bringing it up to current standards.

The mention of “portable” classrooms—or any similar term—puts fear into the hearts of parents with school-age children.

The Art of Science: A new center for the study of nanotechnology merges landscape with building, and sculpture with architecture, reshaping a formerly bleak part of the University of Pennsylvania campus.
Joann Gonchar, FAIA
No Comments

Although located in dense West Philadelphia, the University of Pennsylvania has a genuine campus—one organized around a series of green spaces and landscaped quadrangles carved out of the surrounding urban fabric.

Facade Retrofits: Wrap It Up

Like all of us, buildings of a certain age often have problems with their facades.

Lighting accounted for 20 percent of the primary energy use in commercial buildings in 2010—more than either heating or cooling, according to the U.S. Department of Energy.

The scientists and policy experts at the Energy Biosciences Institute (EBI) are tackling some of today's most urgent environmental problems, including climate change and the diminishing supply of fossil fuels.

On Thursday contractors plan to top out a seven-story, 28-unit apartment building known as the Stack on an infill site in Upper Manhattan.

In the February 2020 issue, Architectural Record focuses on renovation, restoration, and adaptive reuse, as well as surfaces and building envelope products.