Perkins+Will stacks a dense program into a school building that rivals its lofty downtown-Chicago neighbors.
Lee Bey
No Comments

Perkins+Will stacks a dense program into a school building that rivals its lofty downtown-Chicago neighbors.

On the Waterfront: A quarter-mile-long stretch of docks, piers, and boardwalk is bringing city life right up to the edge of Green Bay's historic Fox River.
Lee Bey
No Comments

Four years ago, the quarter-mile-long stretch of land along the Fox River, about a block from downtown Green Bay, Wisconsin, was mostly a simple path and a large empty space behind a mall parking structure.

Lee Bey
No Comments
Theaster Gates, 12 Ballads for the Huguenot House, 2012. Installation view, Documenta 13, Kassel, Germany. It’s probably safe to say few people—if any, at all—have made a connection between the Huguenots who were run out of France in the 1700s and the waves of African Americans who fled the cruelties of the South during the 20th century. But drawing such unique parallels is a hallmark of artist Theaster Gates, whose work touches art, urban planning, culture, and music. For his well-received 12 Ballads for the Huguenot House, Gates and his team dismantled much of the worn interior and timbers of
Read More 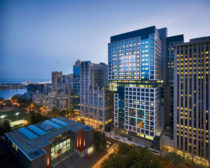 An old meatpacking plant abutting Manhattan's celebrated High Line park could soon be replaced by what promises to be one of the most talked-about buildings in New York, if all goes according to plan.

Though it focuses on the work of Chicago architect Jeanne Gang, Building: Inside Studio Gang Architects at the Art Institute of Chicago is not a retrospective.

Lee Bey
No Comments
Photo © Lee Bey The longtime drummer for Bruce Springsteen's E Street Band, Max Weinberg, speaks at Frank Lloyd Wright's Unity Temple in Oak Park, Illinois. A few years ago, Max Weinberg showed up unannounced at the Frank Lloyd Wright-designed Unity Temple in Oak Park, Illinois, hoping to get a look inside. "It was on a Sunday and the building was closed and there was a maintenance person outside that I just berated to let me in," Weinberg said. "Then I dropped this bomb: 'I'm in this band...'"Not just any band. For almost 40 years, drummer “Mighty” Max Weinberg has
Read More
Subscription Center
More Videos