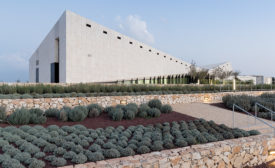 A museum near Jerusalem, dedicated to Palestinian culture, offers a glimmer of optimism in troubled times.

A controversial 539-foot pyramidal tower in downtown Jerusalem, designed by Daniel Libeskind, will not be built, the Israeli daily Haaretz reported last week.

Long embroiled in controversy, the troubled project now has 2018 as its completion date.
Esther Hecht
No Comments

Despite its tortuous history, the Museum of Tolerance Jerusalem is “rapidly progressing,” according to its backer, the Los Angeles-based Simon Wiesenthal Center.

Esther Hecht
No Comments
Says the architect, "we will continue full-speed ahead." The controversy surrounding Daniel Libeskind’s planned stone-and-glass pyramidal tower in Jerusalem reached fever pitch late last month. Following impassioned objections by groups and individuals, the city approved the plan October 28, but with major changes: officials reduced the height by more than one-third, from 539 feet to 355 feet; ordered the architect to replace the arched arcade around the base with retail businesses that open to the street; and forbade communication devices, such as cell phone towers, above the apex. Ten years were allowed for completion. Asked whether he would stay with
Read More

Esther Hecht
No Comments
Will the luxury high-rise give Jerusalem's downtown a boost, or create a ghost town? The news that Jerusalem is to have a pyramid of its own, a skyscraper designed by Daniel Libeskind, has elicited mixed reactions. City officials say the stone-and-glass building will help revitalize the city center, and one expert hopes that world-class architecture will be a boon for the area. But critics have voiced concern that the luxury tower—with 200 apartments, a boutique hotel, a restaurant, and a ground-floor arcade of upscale shops—will exacerbate the phenomenon of ghost apartments in the city, that is, apartments owned by residents
Read More

Esther Hecht
No Comments
The original hotel was completed in 1929. Jerusalem has strict standards for preservation of historic sites, and the Palace Hotel façade has been meticulously restored. The Waldorf Astoria Jerusalem is a study in contrasts. It is both the oldest and the newest luxury hotel in the city. It has a traditional Islamic façade, yet the most modern and green amenities and infrastructure. Situated in the heart of Jerusalem, the hotel is a five-minute walk from the historic Old City walls. Built as the Palace Hotel in 1929 by the Supreme Muslim Council headed by the Grand Mufti Haj Amin al-Husseini,
Read More

Esther Hecht
No Comments
After the International Union of Architects rejected the RIBA's call to boycott the Israeli architects’ association, RIBA set up a committee to look at its own practices. ﻿﻿ The Royal Institute of British Architects (RIBA) has decided to set up a committee to consider its own role “in engaging with communities facing civil conflict and natural disaster,” the Architects’ Journal has reported.The establishment of the International Committee Working Group is, in part, a face-saving measure that follows the RIBA’s controversial call to consider a boycott of its Israeli counterpart at the August meeting of the International Union of Architects’ (UIA)
Read More

Digging for The Past and Future

Esther Hecht
No Comments
A new archaeology campus designed by Moshe Safdie is under construction on a Jerusalem hillside. The most striking feature of the National Campus for Archaeology is a giant, concave canopy, held in place by cables and made of woven fiberglass-and-polymer fabric.﻿﻿ In Jerusalem, the capital of a modern country enthralled by its past, a unique national archaeology campus is being built. The project—commissioned by the Israel Antiquities Authority (IAA) and officially named The Jay and Jeanie Schottenstein National Campus for the Archaeology of Israel—combines three major components: storage of the national archaeological treasures (some two million items); restoration labs for
Read More

U.S. Architects Criticize RIBA for its Stance on Israeli Counterpart

Esther Hecht
No Comments
Well-known U.S.-based architects have taken issue with the Royal Institute of British Architects (RIBA), Britain’s leading architectural association, for its political stand against its Israeli counterpart. According to the Architects’ Journal, Daniel Libeskind, Richard Meier, and Rick Bell, the executive director of AIA New York, have spoken out against the RIBA’s decision to seek the suspension of the Israeli association from the International Union of Architects (UIA) “until it acts to resist projects on illegally-occupied land and observes international law and accords.” The motion was presented to the RIBA council on March 19 by the association’s past president, Angela Brady.
Read More
View All Articles by Esther Hecht
Subscription Center
More Videos

This webinar will look at the importance of good acoustics for IEQ and will provide strategies to help architects and designers balance cost, aesthetics and sustainability with the need for interior acoustical quality for maximum occupant comfort.