Martin Filler
No Comments
July 2011 Reassessing the rise and fall of Postmodern architecture It is now nearly a quarter of a century since Postmodern architecture — which proposed to make historical references respectable once again — was declared officially dead by none other than its most capricious establishment advocate, Philip Johnson. His exhibition Deconstructivist Architecture (co-curated in 1988 with Mark Wigley) at New York’s Museum of Modern Art brought an abrupt end to a trend that had lasted just over two decades. Photography ' Rollin La France The house Robert Venturi designed for his mother Vanna in Chestnut Hill, Pennsylvania (1964). Image courtesy
Read More

Martin Filler
No Comments
Retro-American fantasies furnished by Ralph and Barbra. America — land of the free and home of self-actualization — remains unsurpassed for the license we grant to wholesale personal reinvention, a transformative process perhaps most tellingly revealed in people’s homes. Our ingrained national penchant for imagining whom you want to be and then becoming it grew to unprecedented proportions during the Golden Age of Hollywood. Photo courtesy Polo Ralph Lauren (top); courtesy Barbra Streisand from My Passion for Design (Viking) (above) The new Ralph Lauren store at 888 Madison in New York looks like a Parisian maison particulier (top). Barbra Streisand’s
Read More

Martin Filler
No Comments
Like most other architecture critics, I’m often asked to write essays for monographs on living architects. However, unlike some of my colleagues — especially the king of introductions, whom I dub the Grand Old Laureate and Dispenser of Bland Encomiums, Ramblings, and Gallingly Equivocal Reviews — I always decline such requests, even from those whose work I admire and despite the temptingly high honorariums. My blanket excuse is that if I agree to one I’d have to say yes to all, and because the requisite positive introduction is tantamount to a wholesale endorsement, my objectivity would be suspect when assessing
Read More

The biggest quandary facing some architects is the wording on the door.
Martin Filler
No Comments

As any good psychologist will tell you, names are destiny, imposing on newborn babies parental expectations that often become self-fulfilling prophecies.

Martin Filler
No Comments
For architects on the edge, early success can be a sword that cuts both ways. Early adulation can morph into a fearsome burden, the “how-do-I-top-myself?” syndrome that frequently shadows exceptional success. Sometimes external factors interject a negative answer to that question. Shifting trends in taste thwarted the prospects of several early-20th-century vanguard architects, including Louis Sullivan, Charles Rennie Mackintosh, C.F.A. Voysey, and the Greene brothers, all of whom were labeled old hat when a resurgent vogue for Beaux-Arts Classicism — which Sullivan foresaw at the 1893 Chicago World’s Fair — reared its neo-Roman head. Photo courtesy Collection Nai, Rotterdam Public
Read More

Martin Filler
No Comments
For architects on the edge, early success can be a sword that cuts both ways. Every aspiring architect dreams of a breakthrough project that will establish his or her name soon enough to buy time and offset the geological pace of a creative process often calculated in decades rather than years. Photo © Norman Mcgrath/Esto (top); Wayne Andrews/Esto (above) This house and studio on Long Island for his parents set Charles Gwathmey on the path to success (top). Condominium 1 at Sea Ranch was a highlight in Charles Moore’s career (above). But as the career tangents of even the most
Read More

The Four Seasons: Serving Up a Heady Cocktail of Gravitas and Glamour

In New York City, where restaurants last an average of two years and seldom more than seven, a dining establishment that survives for half a century might seem a culinary Methuselah.

Martin Filler
No Comments
Blake Hughes, a longtime publisher at McGraw-Hill—most notably of Architectural Record magazine, which he headed from 1968 to 1981—died in Charleston, South Carolina, on June 11. He was 94. Hughes was known in international planning circles for his particular concern with the housing and infrastructure problems of developing countries. During his years at RECORD, he founded the International Architectural Foundation, which he led from 1973 to 1978. The organization was dedicated to alleviating living conditions in Third World slums, as addressed in an ambitious design competition it sponsored for Greater Manila, which won admiration among specialists but was never implemented
Read More 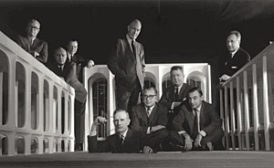 The idea that inspired Lincoln Center began during the Roaring 20s, when John D. Rockefeller, Jr. — pious and penitent son of the rascally robber baron — hoovered up blocks of Midtown Manhattan for a state-of-the-art Metropolitan Opera House.

Martin Filler
No Comments
I’m baffled by people who dismiss whole categories of things. Two decades ago, I was summoned to the office of House & Garden’s new editor in chief, Anna Wintour, and saw my dumbfounded expression reflected in her sunglasses as she declared, “I don’t like adjectives. You use too many adjectives. That’s all.” How can you eliminate a major part of speech, I wondered? Did she realize that her ultimate accolade — “It’s so modern” — is one-third adjective? But now I confess complete antipathy to an entire building type: the visitor center. Photos ' Paul Warchol The Capitol Visitor Center
Read More
View All Articles by Martin Filler
Subscription Center
More Videos