An architect and award-winning journalist, Karen Eicker is a director of the Architect Africa Network. 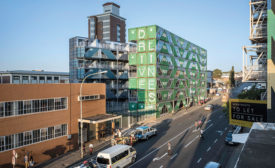 In Johannesburg, a massive residential shipping container development exemplifies a popular housing alternative among South Africans. Plus: Watch an exclusive clip of a forthcoming documentary about LOT-EK.

Where Defiance Began: A cultural complex honors the legacy of the fight against apartheid, while bringing it alive for a new generation of South Africans.
Karen Eicker
No Comments

Red Location is the oldest surviving relocation site in Port Elizabeth, where thousands of native Africans were forced to settle by the colonial government in the early 1900s.

Karen Eicker
No Comments
With millions watching the first World Cup to be held on the African continent, the spotlight is on the host country — and the stadiums commissioned for the games. Soccer City The tough, glistening epitome of life in Johannesburg, Soccer City — the home of football in South Africa — lies coiled at the foot of a mine dump in the Nasrec Precinct adjacent to Soweto. K.E.
Read More

Karen Eicker
No Comments
With millions watching the first World Cup to be held on the African continent, the spotlight is on the host country — and the stadiums commissioned for the games. Moses Mabhida Stadium Situated on the Indian Ocean, Durban’s Moses Mabhida Stadium is perhaps the most assimilated in terms of its long-term vision. The country’s eThekwini Municipality, which includes the City of Durban, stipulated in its brief that the stadium should be a symbol of civic pride and inspiration and draw on the physical features that give identity and character to the site — the sea, the Umgeni River, and the
Read More

Karen Eicker
No Comments
With millions watching the first World Cup to be held on the African continent, the spotlight is on the host country — and the stadiums commissioned for the games. History was made on June 11 when the first game of the 19th FIFA World Cup was played at Johannesburg’s stunning Soccer City—one of 10 new or refurbished stadiums in nine cities —launching South Africa into a highly visible economic and architectural arena. Cape Town Stadium With a seating capacity of 68,000, the Cape Town Stadium nestles in a remarkable setting, between Table Mountain and the Atlantic Ocean. Located in the
Read More
Subscription Center
More Videos