For the past three decades, China has been furiously turning farmland into instant cities, transforming a heavily agrarian society into one with nearly 64 percent of its population now urbanized. In recent years, though, affluent Chinese have started to rediscover their culture’s deep roots in the countryside and the lure of the nation’s often dramatic landscapes. Architects like Ma Yansong, who founded MAD Architects in Beijing in 2004, are now busy exploring new ways of connecting the constructed environment to the natural one. Ma often talks of his notions of shanshui culture, referring to the Chinese words for “mountain” and “water” and to design inspired by a reverence for earth and sky. Yet his approach is anything but traditional. Instead, it aims to reinvent nature—for example, crafting an opera house in Harbin to look as if it were sculpted by wind and water and calling a 5 million-square-foot residential complex in Beihai with rolling roofs Fake Hills. The stadium emerges from a constructed landscape that people can walk along (top) and that will connect a series of facilities in a 175-acre sports park (above). Image © CreatAR Images, click to enlarge.

On winning an invited competition to master-plan a 175-acre sports campus in Quzhou, 250 miles southwest of Shanghai, Ma decided to push his ideas of constructed nature even further—aiming to design a “poetic landscape that falls somewhere between that of Earth and Mars.” He approached the entire site as a park where the buildings—a 30,000-seat stadium, a 10,000-seat gymnasium, a 2,000-seat natatorium, a sports-training center, and a science and technology museum—would be embedded in the earth and emerge as if “made by aliens,” he says. “I was inspired by crop circles.” Land art from the 1960s and ’70s was another reference, helping him deal with the enormous scale of the project and the use of abstract but organic forms. Ma also mentions Moerenuma Park in Sapporo, Japan, where sculptor Isamu Noguchi fused nature and art to create a place in which “the whole is a single sculpture,” as the park’s website notes. The building stands as a landmark in an emerging part of Quzhou. Image © Agovision

By covering the base of the buildings in earth, Ma and his team were able to minimize exposed facades and establish a “thermo-regulator” that reduces solar loads and the amount of energy needed to heat and cool the interiors. They also created an architecture that people can climb and use as public green space, even when the buildings are closed. Pedestrian and bike paths wind from one facility to another, while a shared basement will connect the under-construction gym, natatorium, and training center (but not the stadium) below ground when they are completed. Working with landscape architect Peter Walker, Ma’s firm specified four different kinds of grass, depending on the angle and orientation of the sloping terrain enveloping the structures. Walker also proposed planting thousands of sequoia trees around the three-mile perimeter to create “a linear forest,” says Ma. The trees are now in place and will grow into a leafy buffer between city and sports campus. Once farmland and fish ponds, the park is now part of a rapidly developing area of Quzhou, with low- and mid-rise residential buildings, as well as mixed-use structures. MAD and Walker’s firm, the Berkeley, California–based PWP Landscape Architecture, used the water on-site to create a lake and landscaped the grounds to act as a sponge to absorb rainwater, filter it, and release it when needed. For the stadium, the largest building in the park, Ma envisioned a volcano, with a crater in the center. “I wanted something mysterious, something that would talk to the sky and the universe,” he says. While the base is sheltered by sloping, grass-covered roofs, the architects punched large openings into them to bring daylight and air to the parking and entry levels of the stadium. A poured-in-place concrete structure supports a saddle-shaped bowl for seating. The structure’s enormous arches and curving columns, along with the oval-shaped openings in the base, establish a dynamic visual rhythm as visitors walk through the promenades around the stadium. The exposed concrete frame, with its sculpted supporting members, might make Pier Luigi Nervi proud. To protect the seating areas from sun and rain, the architects at MAD and engineers at the Stuttgart-based firm Schlaich Bergermann Partners designed a steel-and-translucent-fabric “halo” that seems to hover above the concrete bowl, dipping down at one end to open views to the rest of the park. Wrapped with a synthetic-polymer membrane called PTFE, the steel-truss halo rests on nine columns, with the longest span stretching to 312 feet. Lights attached to the underside of the canopy provide most of the illumination, while a pair of antennae-like stanchions punch through the covering where it dips down. A poured-in-place concrete frame supports the seating bowl (5 & 6). Irregular apertures bring daylight and air to the base of the stadium (7). Photos © CreatAR Images (5 & 6), Agovision (7) The stadium is now open, while the gym, natatorium, and ancillary facilities are scheduled to be completed in two years. The science and technology center will be built later. Each building will have its own character, but all will have openings and skylights to bring light and air inside their earth-sheltered forms.

MAD recently completed a large train station and outdoor plaza in Jiaxing, 200 miles northeast of Quzhou, so Ma has been studying the way people move in public spaces. “Everyone is rushing from one place to another,” he notes. With the Quzhou stadium and sports park, “I wanted to create continuous movement between indoors and out,” using the earth as both a material and a threshold. He hopes the park will offer people a place to slow down and escape the pressures they feel elsewhere. 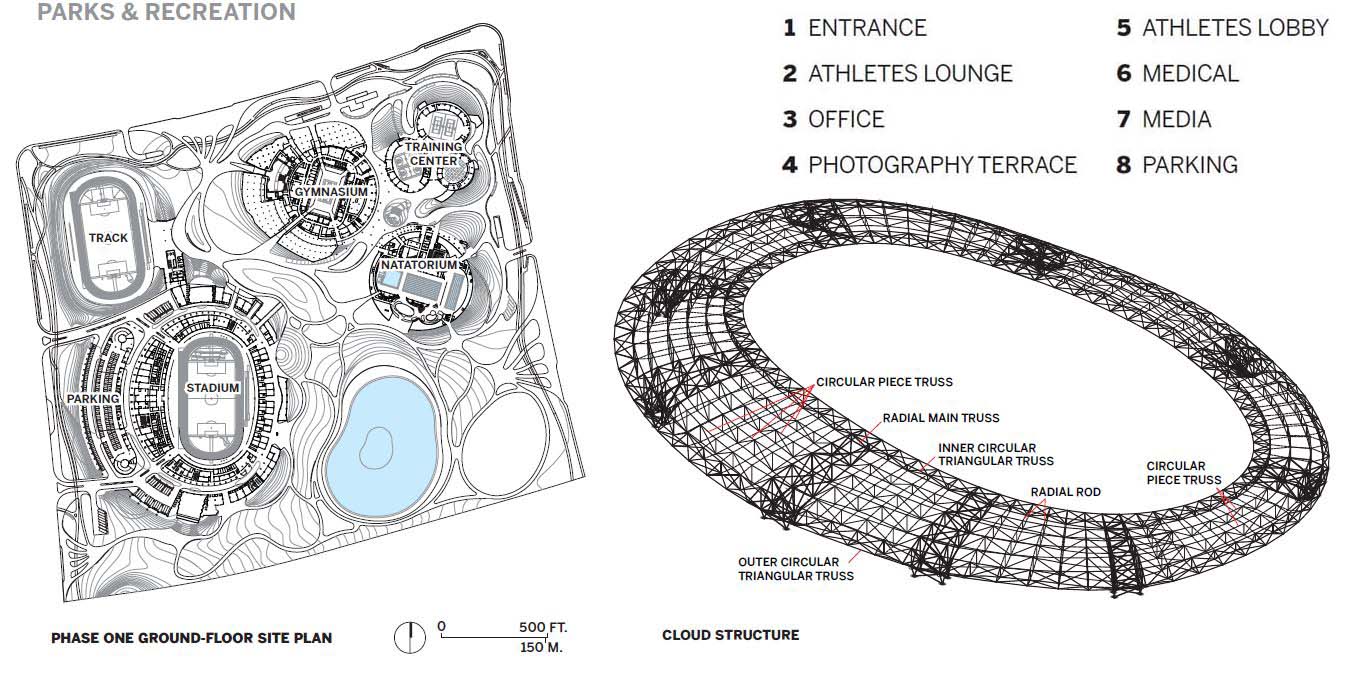 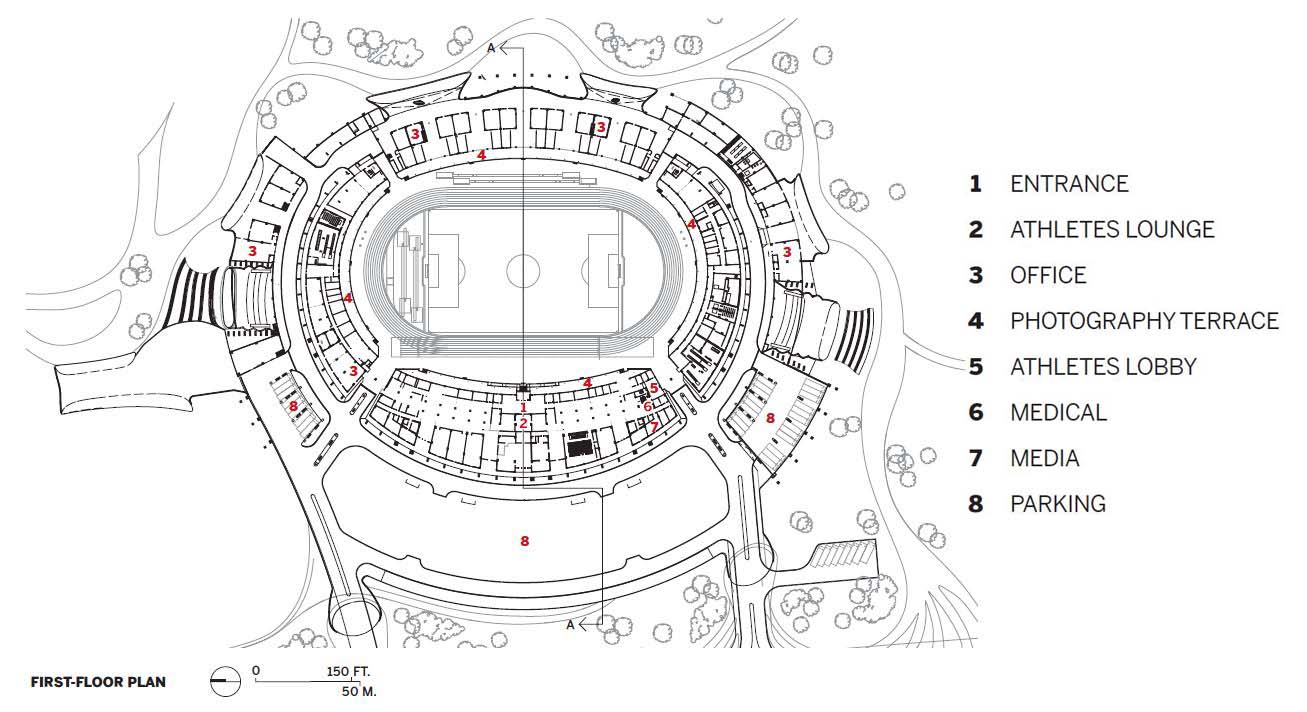 Back to Parks & Recreation Projects 2022