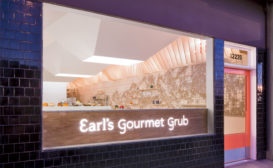 A Fetish for Fabrication

Russell Fortmeyer
One Comment
In digitally sophisticated Los Angeles, the Southern California Institute of Architecture's new Robot House ups the ante. The architects Peter Testa and Devyn Weiser like to point out that the robots are not people. The robots, in this case, are five white robotic arm Stäubli instruments installed last spring in the new Robot House at the Southern California Institute of Architecture (SCI-Arc) in Los Angeles. For that matter, the Robot House is not a house, but rather a converted double-height space at the south end of SCI-Arc’s main building. The room has two glass walls and a catwalk overhead, which
Read More

Russell Fortmeyer
No Comments
Countless buildings were destroyed during the recent floods in northeastern Australia. As the rebuilding gets under way, many are questioning exactly how to move forward. Photo courtesy Australian Institute of Architects Flooding in Brisbane, the state capital. After more than a month of severe flooding, a major recovery effort is under way in the northeastern state of Queensland. There is much to be done. Flooding that began in late December and peaked in mid-January killed at least 22 people, left thousands homeless, destroyed countless buildings, and damaged highways and rail lines. Overall, 70 percent of the state—an area the size
Read More

A husband-and-wife team brings design out of the brush and into Australia's suburbs, where the great majority of the nation's population lives.
Russell Fortmeyer
No Comments
Tony Chenchow and Stephanie Little belong to a crowded field of husband-and-wife architectural practices in Australia.
Read More

Russell Fortmeyer
No Comments
Interviewed in his Tokyo office, the Japanese structural engineer reflects on the dramatic turn his work has taken since Toyo Ito's Sendai Mediatheque, nearly eight years ago. The seemingly random arrangement of columns at Sendai, as well as the organic inspiration of seaweed transformed digitally into structure, suggests a strong precedent for the so-called “flux structure” that Sasaki designed for Isozaki’s Florence train station. He implemented a new shape-analysis approach, broadly described at the beginning of this article, that he calls Extended Evolutionary Structural Optimization (EESO). This is Sasaki’s own version of ESO (he added “Extended”), which is a relatively
Read More

Interviewed in his Tokyo office, the Japanese structural engineer reflects on the dramatic turn his work has taken since Toyo Ito's Sendai Mediatheque, nearly eight years ago.
Russell Fortmeyer
No Comments

Interviewed in his Tokyo office, the Japanese structural engineer reflects on the dramatic turn his work has taken since Toyo Ito's Sendai Mediatheque, nearly eight years ago.

The relationship between architecture and nature rarely gets more explicit than with rammed-earth construction.

An Office for Hodgdon Powder Company

It wasn’t image consciousness or architectural publicity that convinced the board of the Hodgdon Powder Company to hire an architect to design its new production facility’s administration building near Herington, Kansas.

California hospitals get a seismic reprieve

Russell Fortmeyer
No Comments
The California Building Standards Commission (CBSC) moved in December 2007 to allow the reclassification of potentially hundreds of seismically questionable hospitals in the state to avoid possible closure due to code noncompliance. The decision will likely ripple through the large market for health-care design and construction that developed following Southern California’s Northridge earthquake in 1994, which left many hospitals still standing, but structurally unsound. “This is giving hospitals more time to do what’s right,” says Chris Poland, a structural engineer and the president and C.E.O. of San Francisco–based Degenkolb Engineers. After the 1994 earthquake, Poland served on an advisory board
Read More
Previous 1 2 3 4 5 Next
Subscription Center
More Videos