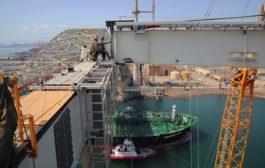 Tom Ichniowski
No Comments
Proposal includes $115B for highways and bridges, $85B for transit, $110B to replace lead water lines.
Read More

The new president is expected to unveil a major proposal for roads, bridges, water and energy, and boost labor and climate resilience.

The White House has announced that President Trump intends to nominate J. Brett Blanton, a senior engineering manager with the Metropolitan Washington Airports Authority, as the next Architect of the Capitol.

Tom Ichniowski
No Comments
A new 27-month highway-transit measure is close to congressional approval, after nearly 33 months of short-term funding extensions.  Leading Senate and House negotiators said June 27 they had reached agreement on the new bill, which would fund surface-transportation programs through Sept. 30, 2014. Related links Grimshaw and Gruen Score Contract for Union Station Master Plan in Los Angeles Construction and transportation industry officials, who have lobbied hard since at least 2009 to get a long-term bill, hailed the news from Capitol Hill. National Stone, Sand & Gravel Association Chairman Ronald Summers, said, “This is an extraordinary step toward the passage
Read More

Tom Ichniowski
No Comments
Two other officials reportedly “removed,” including Robert Peck, head of Public Buildings Service. The head of the U.S. General Services Administration, Martha Johnson, resigned on April 2 and earlier removed the leader of GSA’s Public Buildings Service and another senior official from their jobs, an Obama administration official says. The shakeup was sparked by an inspector general’s report blasting GSA for “excessive and wasteful” spending and failing to follow federal contracting rules on a 2010 conference whose price tag exceeded $822,000. Related Links:Peck Returning as GSA Buildings Chief The Obama administration official said the two GSA executives removed were PBS
Read More

Tom Ichniowski
No Comments
In a victory for architectural firms, the Small Business Administration has backed away from a proposed major boost in the revenue a firm can have and still be rated “small.” That ceiling governs eligibility for small-business programs, such as contracts set aside for such firms. Last year SBA proposed hiking the “size standard” for both architectural and landscape architectural firms to $19 million in average annual receipts, from $4.5 million for architects and $7 million for landscape architects. Under the higher caps, small firms would compete against much bigger ones for small-business set-asides. After architects flooded SBA with criticisms about
Read More

Tom Ichniowski
No Comments
The State Dept.'s Bureau of Overseas Buildings Operations (OBO) manages U.S. embassy construction around the world. Last year, OBO launched a Design Excellence initiative, modeled after the General Services Administration's long-established program. Over the past year, State Dept. working groups have studied OBO's programs and policies and came up with more than 60 recommendations for changes in how it does business. ENR's Washington bureau chief, Tom Ichniowski, spoke with OBO's acting director, Adam Namm, and its deputy director, Lydia Muniz, in late April during a meeting of the bureau's Industry Advisory Panel, and followed up with Muniz on May 4,
Read More

Tom Ichniowski
No Comments
MAJ Gregory J. Taylor is a 43-year-old licensed architect from Dallas who is serving in Afghanistan with the U.S. Army Reserves. Architectural Record checked in with him this week to hear his perspective on Osama bin Laden’s death. Photo courtesy MAJ Gregory J. Taylor How did you hear that Osama bin Laden had been killed? I actually heard about bin Laden’s death when I was getting ready to eat breakfast on Monday morning at our dining facility on the base. I remember walking into the main seating area around 7:30 a.m. and seeing the headlines on the television that bin
Read More
View All Articles by Tom Ichniowski
Subscription Center
More Videos