“There is always space for culture, we will always go forwards.”

These are the words of Teresa Iarocci Mavica, the director-general of the Russian V-A-C Foundation, spoken at the December opening of V-A-C’s Renzo Piano Building Workshop-designed contemporary art space GES-2, located in the heart of Moscow. Two days earlier, the building had been officially opened by Vladimir Putin, who played the piano in the venue’s subterranean recording studio. The whole project was funded by oligarch Leonid Mikhelson, thought to be the richest person in Russia with apparent close ties to the authoritarian leader.

I traveled to Russia to cover GES-2 for RECORD in December, and the visit has been on my mind as the tragic invasion of Ukraine unfolds, as have questions around the complicated relationship of culture and architecture with power and state. “I am sure there are problems [in Russia] as in Europe and all around the world,” Mavica told me, adding that “art is about the future”—a response seemingly phrased to avoid incurring anger from Russia’s government.

With violence now inflicted upon Ukraine daily, some Russian cultural organizations are speaking out more openly than others. V-A-C has said it will stay open to “provide a safe place for people to communicate, support one another, express empathy, and take a break from an oversaturated information environment,” though its entire cultural program has halted “in solidarity and respect to our visitors, employees, and the artists’ choices.”

Icelandic artist Ragnar Kjartansson, whose performative installation Santa Barbara opened to inaugurate GES-2 in December, terminated the installation. The invasion “ended this Russia that was created after the Soviet Union,” he told Icelandic state broadcaster RUV, speaking in Icelandic. “Now it has just become like a full-blown fascist state.” 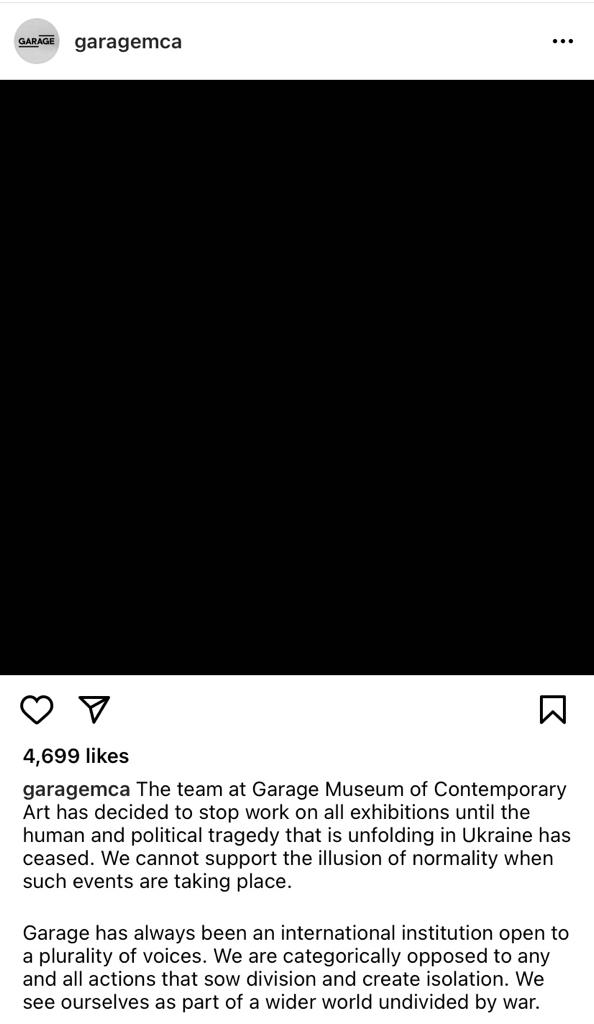 The Garage, an arts organization based in an OMA-designed building in Moscow, posted a black square on Instagram in protest of the Ukraine invasion. Photo via Instagram. Click to enlarge.

Other Russian arts organizations have been more direct. The Strelka Institute, a future-thinking design and media organization that is leading the development of new urban guidelines for Moscow and partners on design projects including Diller Scofidio + Renfro’s Zaryadye Park—put all work and programs “on hold indefinitely,” stating that “dialogue and cessation of hostilities in Ukraine is the single most important goal right now.” The Garage, designed by OMA and funded by Russian-Israeli billionaire Roman Abramovich and his wife Dasha Zhukova, posted a black square on Instagram—a nod to Ukrainian artist Kazimir Malevich—and a statement declaring the closure of “all exhibitions until the human and political tragedy that is unfolding in Ukraine has ceased.”

Close by in that part of Moscow are the Tretyakov Galleries—where the original Black Square hangs—which has also taken to Instagram, though with more nuance. Alongside text about culture uniting people and creating space for dialogue, the Galleries posted a black-and-white photograph of The Apotheosis of War (1871), a Vasily Vereshchagin painting of human skulls piled on barren earth, an anti-war and anti-nationalist work. If the Galleries had chosen a color photograph of the artwork, the rich blue skies over orange earth would perhaps have been too reminiscent of the Ukrainian flag for state censors.

But to expend more words on oligarch and state culture in Moscow seems obscene while violence is unleashed on Ukraine. In Kyiv and other cities, a barrage of Russian attacks take human lives and destroy artifacts of Ukrainian culture each day.

The Ivankiv Historical-Cultural Museum, located north of Kyiv, has reportedly been destroyed, alongside over 20 works inside by artist Maria Prymachenko—a wilful destruction described by ICOM US as a “despicable act in violation of the rules of modern warfare.”

When Russia targeted Kyiv’s TV Tower, killing five people, bombs also hit the site of the Babyn Yar Holocaust Memorial Center (BYHMC), a landscape commemorating the place where 35,000 Jews were murdered by Nazis. The bombs fell just 500 feet from the delicate wooden Babyn Yar Synagogue, designed to memorialize but also act as living space for Jewish prayer and presence. “Only a few months after its inaugurations, the synagogue is caught up in a war that only celebrates death,” Manuel Herz, the structure’s architect, told RECORD. “What is the point of commemorating history, if the lessons to be learned are forgotten and ignored so easily? It leaves me speechless, numb and powerless.”

In an act reflecting Ukrainian resistance, the BYHMC stood firm, saying earlier this week that an international competition already underway for a new 326-acre masterplan would continue. But on Friday, as conditions in Ukraine worsened, the organization announced that the competition would be indefinitely suspended.

Ukraine is home to seven UNESCO World Heritage Sites, and countless more places of architectural, cultural, and artistic importance—from Stone Age cave drawings to works of 20th-century brutalism. These cultural sites could become targets for Russian attacks in the coming days and weeks.

British journalist Robert Bevan, author of The Destruction of Memory: Architecture at War, says that such removal of a past doesn’t just happen with explosive demolition, but also through attrition: “I think it would be much more dangerous for Ukrainian identity if Russia occupied for any length of time. The Putin regime could then more carefully edit (i.e., target) what it chooses to keep and erase—stressing supposed commonalities rather than national differences, of course.”

Will Jennings is a writer, visual artist, curator and educator based in London.