Since the first Aga Khan Awards for Architecture were given in 1977, the honors have sought not only to reward design excellence but also to recognize the impact that projects have on communities and the environment, in places with significant Muslim populations and culture. The awards, made every three years, carry a $1 million prize, shared among the architects and clients of the winning projects. The honored projects (a shortlist of which were announced in June) are scrupulously considered, with an international jury not judging a beauty contest from photographs but rather relying on detailed technical reports made by independent experts who visit every finalist project.

From among 463 nominations and 20 finalists, the six honored projects in 2022 are:

A community-driven project, led by Co.Creation Architects, cleaned up a riverfront dump in a city of 250,000 people to improve the ecology of the waterway and creat public access to the river via stepped ghats and walkways, fashioned of brick and concrete by local masons. View of one of Urban River Spaces's small ghats used by the inhabitants of the community of Shatbariya. The cylindrical structure adjoining the stairs is a changing room. Photo © Aga Khan Trust for Culture / Asif Salman

In the largest refugee camp in the world—where Rohingyas have fled genocide and violence in Myanmar—six lofty, sustainably-built structures shelter women and girls, and include space to make and sell handicrafts. Architects Rivzi Hassan, Khwaja Fatmi, and Saad Ben Mostafa worked with residents to construct the improvisational pavilions, that are simple yet imaginative, using such readily-available materials as bamboo and thatch. 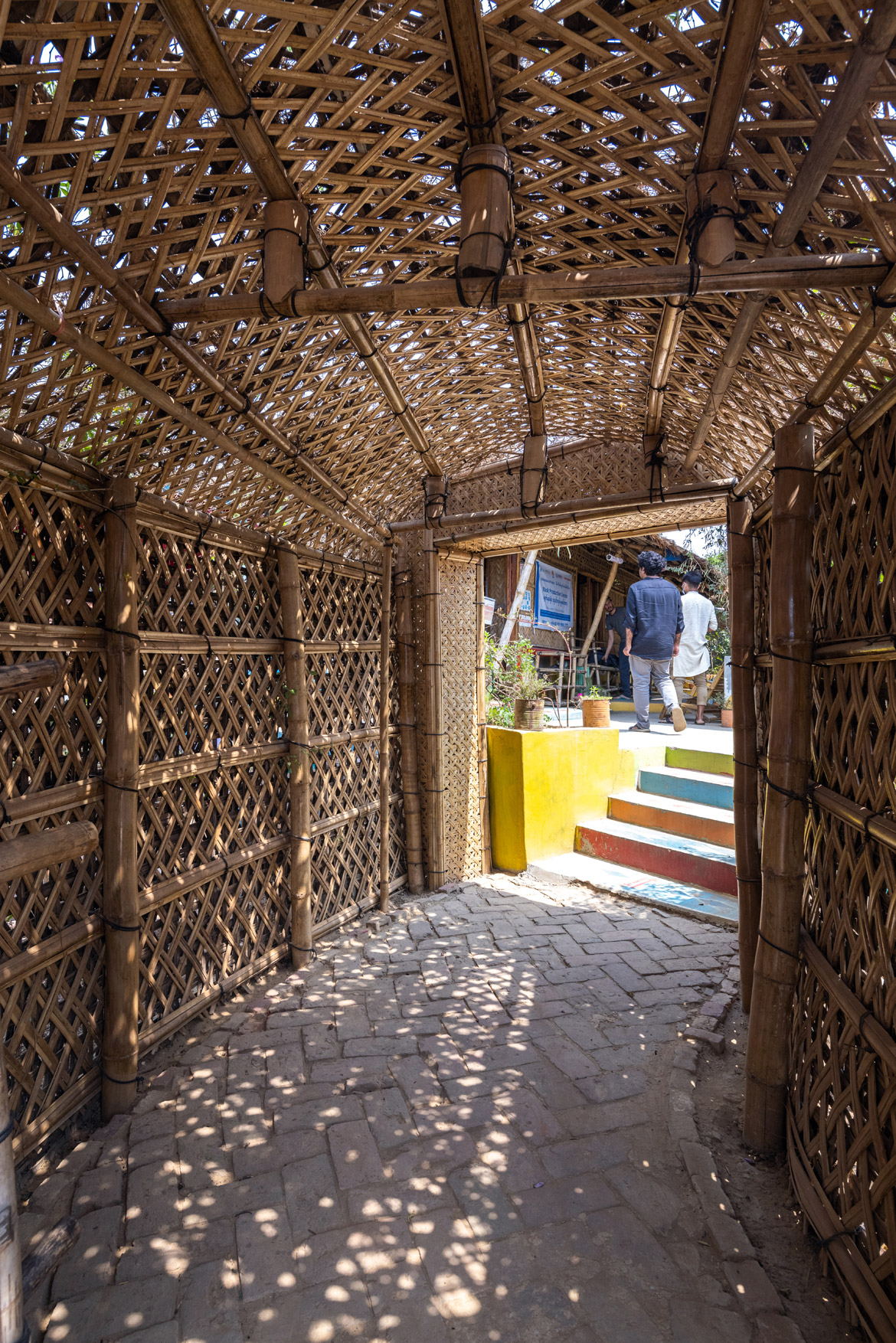 The Safe Space for Rohingya Women and Girls, Camp 25, was designed with easily sourced, basic materials including woven bamboo, straw thatching and tarpaulin that would be less dangerous in the event of one of the regoin's frequent cyclones (1). The display centre in Camp 11 is accessed through a carefully designed tunnel-shaped entrance (2). Photo © Aga Khan Trust for Culture / Asif Salman

One thinks of a new international airport as an enormous, gleaming work of infrastructure, but this modest transit facility, serving 1100 passengers a day, instead connects to its locality, in the midst of rice paddies, in a hot climate. Designed by the architect andramatin, the twin, open-air structures (for arrivals and departures) are inspired by vernacular houses, using wood details, in the grass-covered roofs, that filter light, with deep overhangs for shade. The design incorporates water features and greenery to blur the distinction between inside and out. This 100-year-old brick brewery, in the heart of a dense neighborhood in Tehran, has been converted into a contemporary visual arts space by the Iranian Austrian architect ASA North/Ahmadreza Schricker Design. The architect respected the integrity of the abandoned building, through the insertion of a metal structure to support new, high-ceilinged galleries, an elegantly curving white concrete staircase and other features, that bring it back to vibrant, urban life. A view of Argo Contemporary Art Museum and Cultural Centre by night (3). The museum's courtyard entrance is directly connected to the street, allowing larger events to overspill into the public space (4). Photos © Aga Khan Trust for Culture / Deed Studio

Renovation of the Niemeyer Guest House

Part of the site of the Rashid Karami International Fair, planned and designed by Oscar Niemeyer in the 1960s but abandoned unfinished as civil war erupted in the 1970s, the guest house is the first of this spectacular modernist ruin to receive attention. Under the guidance of East Architecture Studio/Nicholas Fayed and Charles Kettaneh, the pavilion has been restored and fitted with moveable steel-and-glass partitions, lighting designed to the existing ceiling grid and locally-sourced plywood panels, among other elements, to support a program highlighting Tripoli’s once-thriving crafts industry with a materials library and maker spaces. Drawing on what was easily-sourced locally, the Barcelona-based architects Dawoffice/David Garcia and Aina Tugores designed a series of stand-alone classrooms, in the dramatic form of catenary vaults made of clay, covered on each side by a steel sheet, and enclosed by wooden lattices to admit light and air. The small buildings, constructed by volunteers, are arrayed in groups around existing trees that each offer a shaded outdoor gathering space. Entrance to the science labs where the wooden lattice is placed vertically to provide darker conditions (5). Interior view of a classroom with floors made of local terrazzo (6). Photo © Aga Khan Trust for Culture / Amir Anoushfar

The awards will be given in a ceremony later this year in Oman.